As gamers, we slowly grow more jaded as we grow more experienced. Games just aren�t as enjoyable anymore, and many people (mistakenly) blame this on lack of creativity in the industry. This is not the case; we just notice problems that we have overlooked before. As one grows more familiar with video games as a medium, one becomes less prone to surprise and wonder. Very rarely does a game ever inspire that rarest of feelings, joy, and when it does, it�s a magical experience. 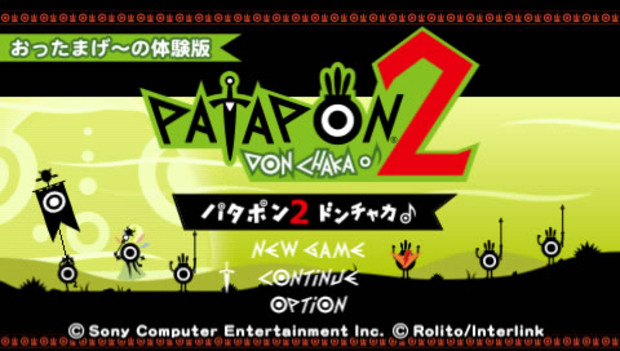 Come on, just look at them!

The presentation is good, but part of what makes it such a happy game is by how it plays. You control your Patapons by drumming! Each button is a different drum; starting from triangle and going clockwise, they�re chaka, pon, don, and pata. Different beats give different commands, such as advance, attack, defend, and so on. It�s fun because you end up making music as you play the game. If you�re on the beat enough times in a row, your Patapons go into fever mode, dealing more damage and getting new attacks. However, describing the gameplay doesn�t really do it justice. Your Patapons chant your beat after you play it; in hero mode, they sing a song in the background. You actually feel like you�re making music, and not just hitting buttons in time, as opposed to some other rhythm games. Just... look at a video, for example.

Patapon 2 can be grind heavy at times, but even that is whimsical. Throughout levels, you may unlock certain Patapons that go back to your base. Back at the base, these new Patapons let you play rhythm-based minigames in order to win resources. These include touching a lonely mountain�s toes, helping a shy bell dance, or (my personal favorite), helping a dancing tree scratch his head.
Patapon 2 is one of my favorite games, because it�s just so cheerful. Although it gets fairly dark near the end, your Patapons never stop singing and dancing, and there always seems to be hope. Patapon 2 doesn�t try to make you think about morality, or the nature of good and evil; it simply wants to make you smile. And it certainly succeeds.
#Community    #OpinionEditorial
Login to vote this up!