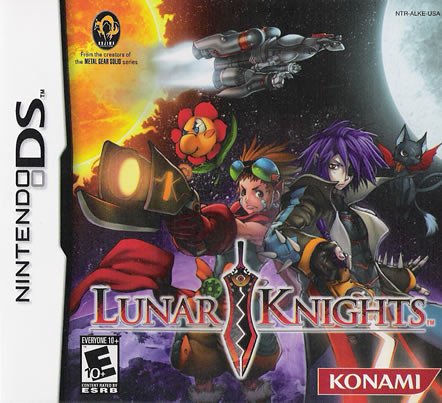 So I picked up this game on its release day a while back and have been taking my sweet time playing it, but this game is nothing short of completely incredible.

Kojima Productions brought forth another hit and this time on the Nintendo DS. Lunar Knights is a great game with a simple yet effective top down view similar to an RTS but while only controlling one character at a time with Anime style cut scenes. On the surface this game appears to be your standard handheld title with some weapon variations and some pretty sweet graphics. But in reality this game goes much deeper.

Lunar Knights includes two characters one dark and one light who must harness moonlight and sunlight respectively in order to power their weapons for better attacks. Lucian who is a vampire uses a sword and can attack even when fully drained of power. Aaron who is a soldier boy uses light guns and can only attack when having sufficient power. Luckily there are many items which can give energy in the absence of your appropriate light source.

The game gets right into the thick of things allowing each character to pick up coins used as currency, �junk� to be formed into items via synthesis, weapons, and items. Each zone or area can experience a specific climate in which certain armors can either help or harm your character. Later in the game you will find a lab which allows you to change the climate of each zone at your leisure to accomplish certain goals such as melting ice walls to pass or freezing streams to create a bridge.

By picking up �junk� you can create and upgrade new weapons in a similar system to the Monster Hunter series. Each weapon can be optimized for strength, stamina, speed, or range. Light guns being made from lenses and casings while swords are made from metals.

In addition to all of this there are small guardian forces that can be used interchangeably between the characters, the forces are one of four elements (Earth, Wind, Fire, Ice) while each character has his own special guardian. Lucian has a cat with wings which adds a dark power up to his sword while Aaron has a sunflower which adds power to his guns. Lucian�s cat allows him to transform into a vampire beast with claws and slash enemies in trance mode wile Aaron transforms into an armored soldier and gains extreme firepower while in trance mode which is attained by building up a meter which grows with each successful hit on an enemy each character can utilize each guardian for a power attack which uses the touch screen to destroy enemies and bosses.

Just in case you don�t have enough to do, after each major boss you take part in a space shooter bit in which you must tackle the enemy and avid asteroids. The ship is able to be equipped with any of the guardian forces AND use their trance modes. Also there are sneaking missions, wireless multiplayer, extra game modes, and tons of replay value.

Holy Hell! That�s a lot for one little handheld game!

So if you made it through all that stuff and have some Lunar Knights experiences to share or if you are one of the lucky one who actually bought the game then let me know what you thought! 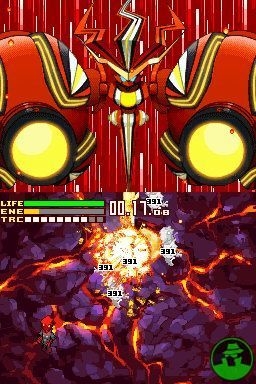 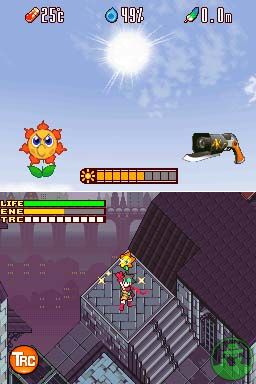 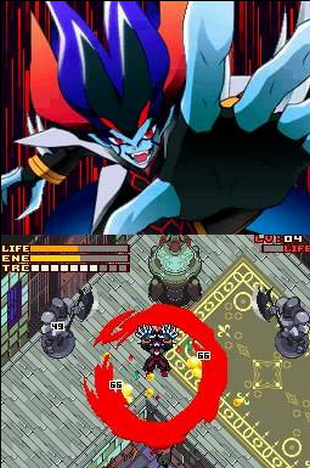 I'm 23 and live in Western Massachusetts, USA and like Video Games, but more than that I like consumer electronics, including and especially focused on cool things I can carry on my person.


I do marketing for a manufacturing company who makes watertight/airtight enclosures for the US military to put all of their expensive stuff in. i.e guns, missile components, aircraft parts. pretty damn neat. needless to say all of my gaming peripherals are soundly protected by mil-spec cases now.

Hobbies: Drawing, Gaming, Carving, Hiking, Camping, Fishing, Mountain Biking, Climbing (ice and rock), Kayaking, Skim Boarding, Shooting, and pretty much anything else that ends in -ing that takes place outside.

Dislikes: Hippies, Unorganized things, dead batteries, Tomatoes, City Water, mice without scroll wheels, the original Xbox controller, mosquitoes & black flies (in that order), Wal-Mart (even though I can't afford not to go), and Sweating because of heat and not physical expenditure.