When the theme for this month's Band of Bloggers was revealed, playing games outside of our comfort zone, my first thought was playing a First Person Shooter. I've always scorned FPS games like Call of Duty, or any military shooter really. When I mentioned this to some of the others in the BoB team they immediately suggested DOOM. Oddly enough, I had already played DOOM and loved it.

So do you really dislike FPS games then? Yes! DOOM is a special case! It's the only one I've given the time of day. So then I was recommended Call of Duty: Modern Warfare Remastered, which was free on PS Plus, and I hated the thought of playing that so it was perfect for this theme.

Before I even had a chance to start the game up, Borderlands 3 was announced, along with a remaster of Borderlands 1. Wouldn't you know it, I immediately bought Borderlands: Game of the Year Edition and started playing it with my brother. I realized something while I was playing it though. Borderlands is a FPS. I'm not supposed to like those, that's why I'm playing CoD for this month's theme.

As I thought more about it, a few more FPS games that I love came to mind. One of my ealiest game memories is the original DOOM that I used to play all the time against my parents wishes. They thought DOOM would corrupt me. One of my favorites series of all time is Metroid Prime, which is technically a First Person Shooter, though many call it a First Person Adventure.

So I obviously like some FPS games, but have a hard time with Military FPS games. Why is that? Do I have something against the military? If you had asked why before DOOM came out, I would have told you that it was the inherit violence of the genre, but then DOOM came out, and that argument stops making any sense. In order to figure out why I had such a problem with Miltary FPS games like Call of Duty, I figured I should probably play some Call of Duty.

This isn't my first time playing a Call of Duty game, I played Modern Warfare 2 at a friend's behest back when it was new, but looking back on that, I think I was actively trying to dislike the game. I wanted to play this game with an open mind and a fresh perspective. This was a playthrough that I wanted to use to identify my own biases, so I needed to examine my own experience with the game.

Immediately upon playing one of my problems with the game, and the whole Military FPS genre, became apparent. I hated all the military and gun talk. I know almost nothing about guns, but it seems like the game thinks that I have a huge knowledge of guns and how they work. While gun knowledge isn't necessary to enjoy the game or understand the story, a lot of the dialogue went over my head. There were several times when the game would tell me to do something, usually through Captain Price yelling at me to just do the thing already, and I had no idea what the game was trying to tell me to do by listening to what Captain Price was actually saying. Sometimes it was obvious, "Soap" (somehow the protagonist's name) "grab the RPG and take out that choppa!" I know what an RPG is at least, and I know what a chopper is, so I could do that. Other times though, Price would tell me to grab a certain gun that I'd never heard of, or he would use some military term that I didn't understand and I wouldn't know what to do. This wasn't as big a problem with Captain Price as it was was with whoever commanded the Marine character. I can't remember his name, but the marine sections were more difficult as the marines seem to speak in a completely different language and I usually had no idea what they were telling me to do. Luckily, the game has a compass and an objective that are much easier to understand and I would usually be able to figure it out.

Another problem would be when Captain Price would tell me to do something and I wasn't even nearby. I would often stop to look for enemy intel, something that I really enjoyed about the game actually, and Captain Price or whoever would tell me to do this thing, and so I would have to rush over there, all while listening to Price yell at me to just do the thing already. One such example was when we were hunting down the son of the big bad, and we had him cornered on the roof. I was not on the roof when this happened. I was looking for intel, and then Price tells me to disarm the bad guy. Okay sir, I'll be right there, I say to myself as I ignore him completely and look around in all the nooks and crannies of the level. This was an important story moment so Price started yelling at me to take the dude's gun away, and that gets old fast, so I rushed up there and find at least ten guys all surrounding the bad guy pointing their guns at him, with Price still yelling for me specifically to take the guys gun. I know it's a story bit, but I hadn't been a very realiable soldier up to that point, I don't know why Price kept trusting me to do all these things, especially when there are ten other guys who could have done it a lot better and faster than I could have. To be fair, this was mostly my fault for not following the story as closely as I could have. Most of the time when I would be looking for intel, the story would wait for me, but sometimes the game did not want me to look around, because there is a bad guy right there you idiot, we need to get him. 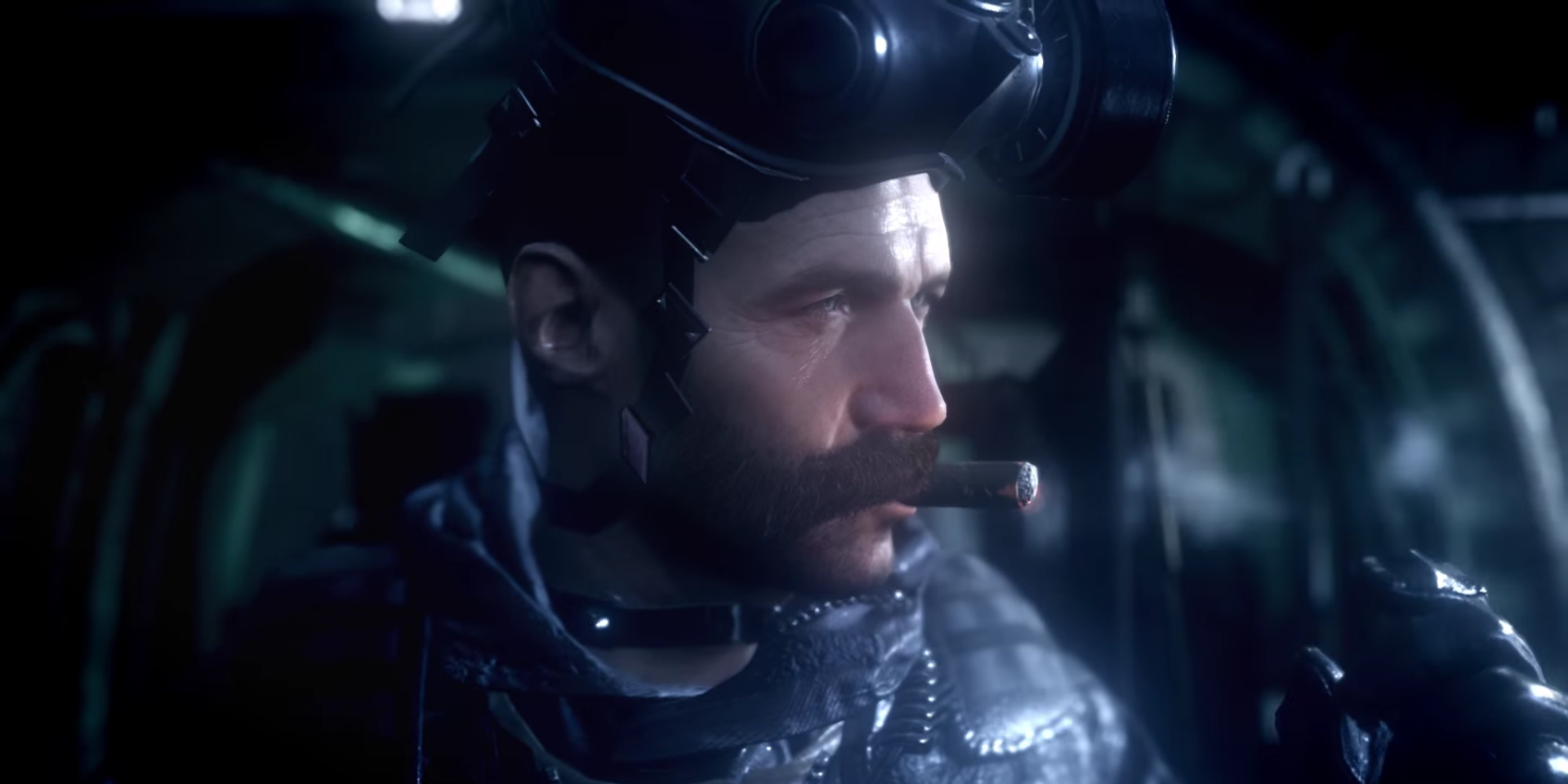 Okay, so I don't necessarily like the language of the game we could say, but that says nothing about the gameplay. How does the game play, and did I enjoy it? Modern Warfare is considered a classic among fans the of games, so it would be pretty weird if the gamepaly wasn't solid. The game gives you a lot of mission variety, more than I was expecting for sure. While most of the time you'll be hiding behind cover and taking shots at enemies, they put you in a lot of interesting situations and locations to keep it the gameplay from getting stale. The first mission is in a ship, there's a few mission in the middle east and you have to move from building to building until you catch up to a tank, then you protect the tank. There is a mission where you are in a helicopter providing air support and you have to use night vision to see your targets. And as much as I hate to admit it, I had a lot of fun playing Modern Warfare.

That brings up the question again, why did I hate to admit it? Why was I so dead set against this game, and why did part of me try to hate it. The whole thing about the game's language was kind of nitpicky, and was mostly me, once again, trying to dislike the game. The gameplay was too solid to criticize, so I latched onto whatever I could find, and that was my biggest problem that I could talk about. What's my issue with these games?

Playing this game and analyzing myself while playing it brought to mind some misconceptions I had about video games as a teenager that I thought I had pretty well dealt with. I obviously hadn't, as I still had some pretty negative feelings about this game. When I was in high school there was another outcry of "video games cause violence!" There was such an uproar that my parents started considering taking away my video games. I found myself having to defend my video game playing to a lot of people, family and friends. My go to defense was that I don't play those kinds of games. I don't play Call of Duty, I play Nintendo games. Nintendo games are coloful and whimsical. They're pure fun, with no guns or blood. I play RPGs, where you have to think and strategize, there's no shooting people in these games (even if there was).

Even after we collectively debunked those fears (for a time at least), I seem to have kept viewing games like Call of Duty as bad in my mind. These were games that glorified violence and killing people and those who played them were okay with that view. Not only did I hold on to a resentment towards Call of Duty, but I also pushed some of that resentment towards people who enjoyed those games. Considering one of my biggest blogs that I've written on this site is about loving games despite what others think about them, I found my resentment towards not only the Call of Duty games, but the people who play them to be hypocritical. I made a big deal about loving what you love and letting others love what they love, but I was holding onto a teenage anger towards CoD and the people who made it popular.

Finally playing, and enjoying, a Call of Duty game, has allowed me to confront those old resentments. I feel like I've finally let go of my long held and long buried elitist belief that people who play those games are somehow a part of a problem among people who play games. Even if they are giving Activision money for business practices I don't think are all that ethical, I've realized again that I need to just let people enjoy their games. I'll still criticize Activision, but I don't think that criticizing people for playing games they love is helpful. I think that I can finally admit that First Person Shooter games are fun, and that it's okay to love them.