I'm sorry, but Super Mario 64 DS is kind of mediocre. 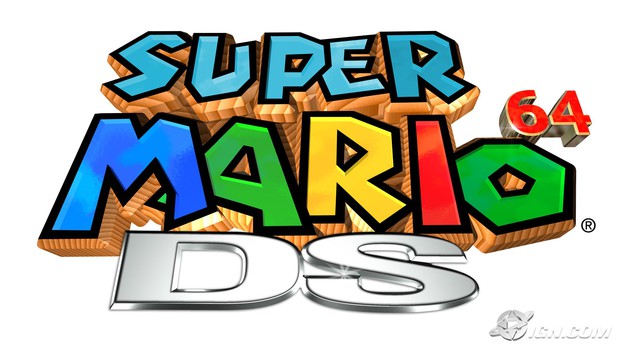 I hate the music in Super Mario 64 DS. Maybe under different circumstances, it wouldn't bother me so much, but the last two games I played on my DS were Space Invaders Extreme 2 and The World Ends With You. I've been hearing some pretty damned good sounds coming out of my DS lately, so when my girlfriend wanted me to play her copy of Super Mario 64 DS, and I first put the game in, I was surprised at how much I completely dislike the sound design in this game. I don't even like Mario's faux Italian voice.

Which is sad to me, when I consider how beloved this game is. You see, when I was in third and fourth grade, I rented Super Mario 64, ran around for a bit, was confused, didn't know what to do, and I returned the game not thinking too much of it. I didn't get it. But in the years since, I've finished my first Zelda game, I've played Super Metroid to completion (on the Virtual Console), and my gaming tastes have grown significantly. And I've heard a lot about how Super Mario 64 is one of the best games of all time.

To start off, you are probably better than I am when it comes to 3D platformers. I'm decently good at things like Mega Man or Ninja Gaiden or random fighting games. But I don't have much of a 3D platforming or a top-down tradition, so I'm pretty terrible at those kinds of games. Super Mario 64 DS seems to know this about me however, and compensates for my disability strangely well: the platforming in the beginning of the game is really easy.

This is a game I've grown with. The same girl who watched over my shoulder as I stumbled through getting hit by wrecking balls, watched me bypass pressing a switch, instead using multiple back-and-forth wall jumps towards the end of the game. Super Mario 64 DS's learning curve is ridiculously smooth, due to the way progression is handled. It's mostly determined by the player. If a particular star is too difficult, there is always another one I can try for instead. So of course, I got all of the easy stars first, then proceeded to get harder ones, making a near-perfect difficulty curve for myself without even knowing it.

But the controls have plenty of stupid quirks that have nothing to do with my fledgling skills. Such as the game deciding to give me occasional hints about analog movement by using the touchscreen... which really doesn't work at all. Using the touch screen controls for movement is awkward in this game, and using the D-Pad isn't terribly precise. Luckily, finishing the game doesn't often require such precision movement, but that pisses me off all the more on the small occasions when it does.

Instead, what I find myself using the touch screen for is rotating the camera. And I do this all the time, because the camera hates me. It doesn't just mildly dislike me; no, the camera is trying to kill me. In my sleep. With a baseball bat. Or maybe a hammer. The camera doesn't want me to finish this game. To be fair, the game uses the L-trigger to center the camera behind your character again, but between Mega Man Zero 4 and Mega Man ZX Advent (both of which I played while I was high on Mega Man 9 hype), the L-trigger on my DS Lite works less than half of the times I press it. So no camera re-centering for me. I've instead been sent to take my thumbs off of the buttons and press the touch screen to rotate the camera the wrong way at first, then press the other button instead to rotate the camera the other way so that I can actually see well enough to not die.

And the game isn't just weird with it's controls. You would normally beat the first boss by picking him up from behind, but the game starts you as Yoshi, who can't actually pick enemies up from behind. Now I didn't play much of the original N64 version, but I'm pretty damned sure that I didn't start the game playing as Yoshi, and it took me some time to figure out how to get and throw eggs to beat the boss. (Ironically, once you figure out how to beat one boss, you have what it takes to beat every single boss in the entire game.) Now that's not so bad, but there are four characters in the game, there are certain stars that you can only get while playing as certain characters, and the game doesn't give you all the characters. I've only been able to unlock Mario so far, and I'm pretty sure I'll beat the entire game before I figure out how to unlock Luigi or Wario.

Super Mario 64 DS has a lot of weird, annoying things like that. There's no way to restart a level without dying or getting a star. If I choose "Exit Course" from the pause menu, then the game kicks me to the center of the castle instead of kicking me out of the painting, meaning I have to run all the way back to where I was. The overworld in this game is about as useful and fun as the barren city of Santa Destroy in the original No More Heroes. Just replace the dumpsters with pink rabbits. And if I've already gotten a star in a level, why does the game kick me out of the level when I accidentally touch that same star again? I have it already. That's obviously not the star I'm trying to get. And I was only able to unlock the "?" Blocks because Noelani blatantly showed me how to do it, which involves using the first-person look: a mechanic that's used no where else in the entire game.

The game developers thought that what this game needed was additional characters and a bunch of mini-games that I'm never going to play. No, what this game needs are some basic interface fixes that make me not want to destroy the fucking cartridge for trying to get a difficult star. The developers should've spent their time instead refining the controls, or at least they should have allowed me to customize the controls. They should have tried to improve the camera. They should have allowed me to restart a level if I know that I did something wrong. But no, instead of spending development time taking out the tedium for newcomers, the development team decided that touch mini-games were a better way to spend their time.

And as I mentioned, I hate the music. It's tepid, and soulless, and boring. I'm actually really nostalgic for Genesis, Super Nintendo, and Neo Geo graphics and sound, but I most certainly am not nostalgic at all for PS1, N64, and Saturn graphics. With a few small exceptions, that entire era just looked really ugly to me. Now I don't expect them to have updated all the textures in the game, but they could have at least updated/remixed the music.

Unfortunately, when I talk to my girlfriend about Super Mario 64 DS, this is what I sound like. I'm constantly bitching about it. I don't like the controls, I don't like the music, I don't like the graphics, and the gameplay is slightly better than "just okay," although occasionally needlessly frustrating. It's not a horrible game, but it's kind of mediocre. And I feel like I've gone astray somewhere for feeling this way. Why can't I see the wonderfulness in this game that everyone else sees?

I'm still trying. I really do want to finish the game, and I currently have 75 stars. But to be honest, I expected better. Instead of feeling like I've spent my time playing something completely awesome... well, I actually feel kind of let down.