Ramblings, polished turds, ME3 class reviews and a bucket of sadness. 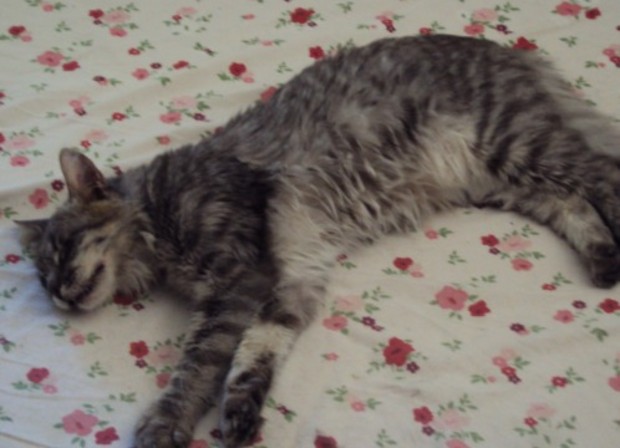 This is Kami, and this is the last picture I ever took of him.

I met the little guy 2 years ago at a shelter I sometimes volunteered at, brought in by a samaritan like many cats are, he was given the tests to make sure he was disease free but in his case it came up positive for FeLV, or feline leukemia, the disease is largely categorized as a wasting away of the animal, most of them don't die from the disease itself, they from a complication related to it largely due to their compromised immune systems.

Anyway, like any infected animal he was going to be put down, but I said no, I stepped in and agreed to take him in, he was this cute little thing and something just compelled me to do so, I don't know why, I've dealt with tragedy before on animals, now I'm adopting one that I know is gonna die before his time? Either I just couldn't do anything, so off he went with me.

You know how some people say that a rescue animal knows its been rescued? They tend to be more loving toward their owner and such, I never experienced this till I had Kami, that cat would not leave me alone, at every waking moment of the day he was 4 steps behind me, he loved to rub his whiskers on my toes or fingers, wherever I went, outside or in he was there, if he didn't see me in the mornings he'd meow up a storm till I opened my bedroom door, he liked me a lot and I grew very attached. He also loved chicken.

He had a few ups and down leading to his death, nothing that couldn't be handled but for a time I couldn't shake the feeling that I wasn't being treated right at my vet's office, I felt like they where treating me like a nuisance, eventually I found another vet but I can't help but feel that my treatment and even Kami's there led to an earlier death, but that's all speculation at this point.

Fast forward to about 3 weeks ago, he's having trouble with his mouth again, FeLV positive animals are prone to mouth infections, again gradual wasting away and this was the case here.

To paint a picture, imagine if your gums where on their last layer of skin, they where beet red and ached constantly and your saliva had become so acidic that it burned the corners of your mouth, that's how bad it got, I had been treating with various medications but they just weren't doing anything, he was eating because his body was telling him to do.

So I take him to the vet and the doc shows me the mouth, the meds are indeed not doing a thing, there's a party of me that wanted to keep going, I just didn't wanna let go no matter what it took, but something else told me to stop and once the vet told me the reason the cat looks haggard is because he was in constant pain and couldn't sleep well, I couldn't let that stand, how can I go about my day knowing this, if I could take his pain away I would but alas it just wasn't the case.

So I made the difficult choice once again, I'm happy to say he didn't waste away at least, he still look good with a nice fluffy coat so he looked wonderful when he arrived at rainbow road up there.

Knowing he was going to go before his time didn't really make things any easier, I miss him a lot, I never imagined this little gray furball was gonna set up shop in my heart like he did, he was a constant presence in my life for 2 years and him not being there hurts, I still sometimes sit outside and think he'll round the corner just like he always did but of course that won't ever happen.

I'm happy I got to him the time I did and I don't regret what I did for a moment, if I had to do I'd do it again, he deserved a shot at a happy life and I know I provided it.

And thank you Phil for helping me get through it with your words. I'm not over by any stretch of the imagination but I feel a lot better.

Anyway that's all from me, thanks for reading, goodnight and have a pleasant tomorrow.
Login to vote this up!