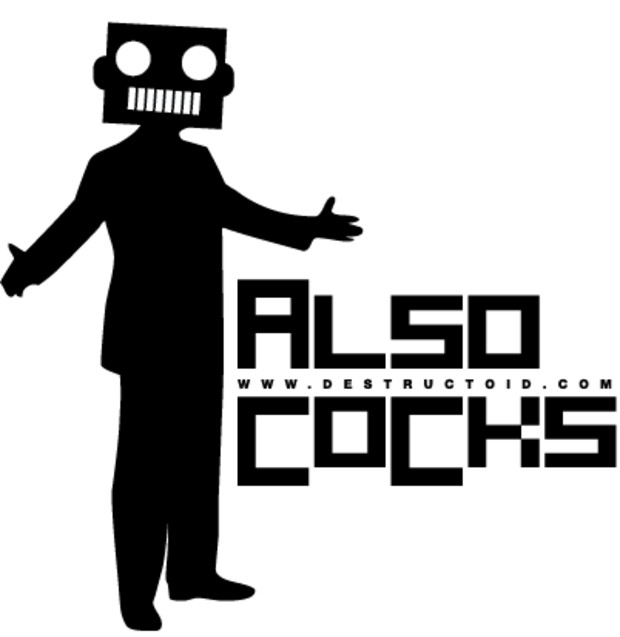 Remember this? You might not if you came aboard sometime after July, to the uniformed it looks like something a 12 year would say, to many of us it was the motto the site lived by, stop taking things so seriously.

But gaming changed, everything was a controversy now, gaming journalism was no different than your average tabloid now, but D-toid was gonna be fight right? They'd never change.

But suddenly it did, a moronic fraud burst onto the scene, entirely misinformed she began to rail against gaming, this is sexist, that is sexist, etc, and D-toid was one of the first to interview her, and just like that, also cocks vanished from the front page, without any fanfare, it just poofed.

And with it, what personality the site had, no longer was Jim the jerk we fell in love with, to many D-toid contributors that where non-entities practically, the remaining older writers toned their shticks, in the case of some completely changed such as one Jonathan holmes.

The edge this site had, what brought me to it originally was gone, even the community has changed, I don't recognize a single face anymore, they're all gone, for reasons like the ones I've listed? Who knows, but its sad, not only is the site unfamiliar territory, even the faces I knew are gone, replaced by ones more in line with whatever D-toid is seeking, the ones all to eager to be loud and boisterous about meaningless shit. Feeding the beast, yes, do not pot interesting game stories, write more meaningless drivel about the flavor of the month or another minority group bitching about being under-represented in games, or supporting the views of some bigoted internet personality while proudly wearing your blinders to their actions. Also don't forget to sub!

Never mind that there isn't a thing on this site worth paying for. Not anymore.

6 years, six friggin years, that's a long goddamn time for anything really, this place was my home away from home, a big part of my life for so long.

But that all must end sadly, at its best, this current incarnation of d-toid is an old comedian, occasionally flashes of what it was, but its past its prime, at its worst, which like 90% of the time, its a corpse with bits of flesh left on it, operated by some demented puppetmaster.

A true crying shame, such a wonderful place, such wonderful people I met and interacted with for so long.

D-toid is like a rotting limb, and part of it must be severed to save the rest, and d-toid you are a limb I should have cut off and burned months ago.

I'm sure I'll here about you again when the site inevitably merges with something else, you know its coming, writings been on the wall for ages even if the boss will never flat out say it.

I request a ban also, the strongest one you have, I don't even wanna be tempted to come back to this place, you aren't healthy for me d-toid, I'm clinging to an old illusion of you and its time to let you go.

Farewell friends.
Login to vote this up!