Better With Age: NIN In Your Face! 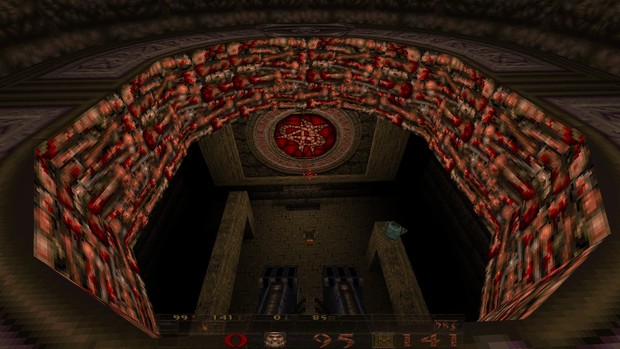 I remember the first time I tried Quake. It was at a friend's house during a sleepover. His brother and I got addicted to the deathmatch part of the game and began exploring the levels. We uncovered hidden pathways, secret weapons and all sorts of hilarious animations.

That was in the year 2001. Five years after the release of the game, Quake was interesting and cool, but seemed to be lacking in modern panache. It had a really detailed gothic setting and tight gunplay, but there wasn't much of a story or any voice acting.

Funny how in 2015, I prefer Quake to any modern shooter. Shooters have grown progressively simpler in recent years. The labyrinthine level structure and focus on skill versus loadouts makes Quake feel more engaging and involving than any Call of Duty or Battlefield could ever hope to. 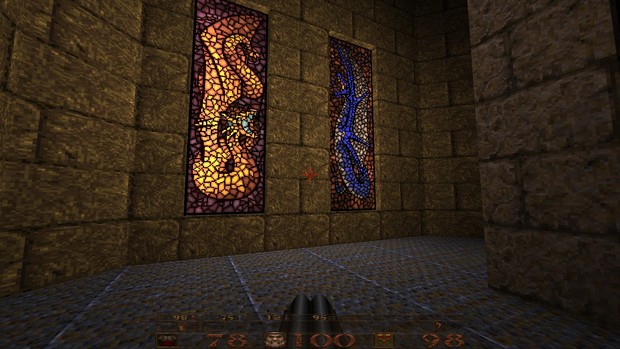 For starters, it's incredible how iD Software utilized an episodic design to take their games into different realms. While this isn't exclusive to Quake, iD certainly understood that making vastly different locations would lead to a more intriguing game. It also foreshadows how companies like Telltale would begin their own markets on serialized games.

While Quake may be uniformly dark, it's levels all have distinct features. Mechanical space stations like Doom usher players into a world that takes a note from author H.P. Lovecraft. You eventually wind up in volcanoes, demonic churches and ancient castles.

Even the enemy selection is unique. Floating corpses, mutated grunts, the abominable snowman and viking creatures will stalk you until you drop. The bosses aren't slouches either, with the expansion featuring a god damned dragon. 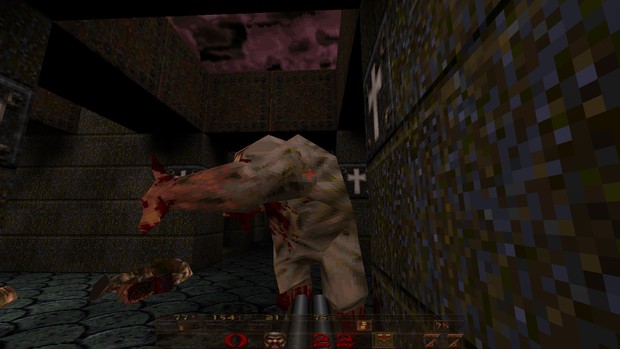 Just tell me he's not a snowman. You can't.

The arsenal may seem limited with today's options of literally everything, but I prefer function over pointless bloat. The shotgun has a fantastically quick shot, the axe is just brutal, the nail gun is fiendishly awesome and the lightning gun is super cool to look at. It also kills everything in water, beating Bioshock to the punch on it's plasmids.

The soundtrack must also receive mention. Trent Reznor of Nine Inch Nails fame composed the score long before he was getting famous from The Social Network. While some tracks feature the heavily distorted guitar riffs that Reznor is known for, there are a lot of atmospheric and eerily slow tracks that bring a sense of dread to the proceedings.

The chunky graphics are even super clean looking on modern displays. While that may be thanks to the Quake engine allowing for unlimited resolutions, the game has a specific style that adds a lot of charm to the game. It's like an old school Minecraft with better animation and enemies. 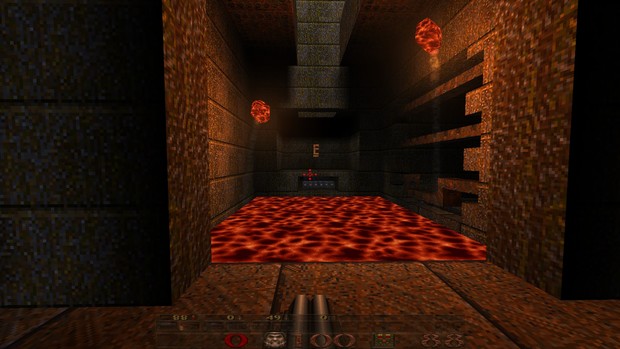 This is basically hell in Minecraft.

The speed at which your character moves in Quake is unheard of in modern games. I'd argue that the Quakeguy is faster than Sonic the Hedgehog. You can zip through hallways and dodge enemies with ease. That brisk pace must be why the character is so thin.

I must also give attention to the deathmatch mode. While I wasn't playing it upon it's original launch, I have had plenty of LAN parties over the years; the variation in levels and unique weaponry give Quake a feel that hasn't ever been replicated.

Vertical structures, booby traps, lava pits and castle interiors combine with teleports and jump pads for high flying, adrenaline pumping fun. Valve even thought so as they ported the Quake multiplayer to Half-Life as Deathmatch Classic.

Bringing up Valve, Quake is also the reason we have Team Fortress. Not a whole lot of games at the time allowed custom modifications. iD Software trusted their fans with tinkering around in the Quake engine. You may say this has nothing to do with the game aging well, but you can still find custom Quake campaigns and multiplayer areans being made to this very day.

Not only that, but Quake servers are still active. It obviously doesn't have a player base in the tens of thousands, but you will never go long if you search for an occupied room. People still love the ebb and flow of Quake combat and how well it feels in the modern age.

Developers really should look at Quake and see how unique and mindblowing the experience is. Not every game needs an epic tale or worthless gimmick to be relevant. Sometimes crafting exquisite maps and offering weaponry that focuses on quality over quantity is all anyone truly wants. 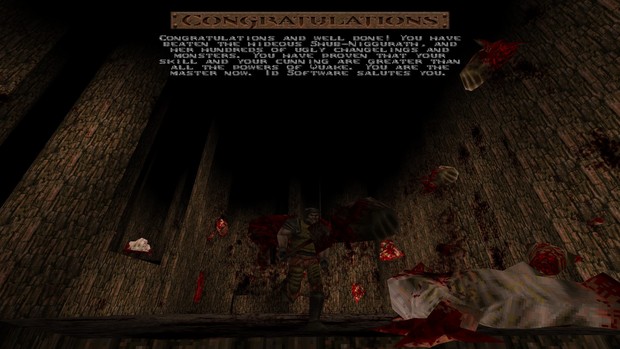