Traveller In Playtime – Sly Cooper and the Thievius Raccoonus

Sly Cooper and the Thievius Raccoonus is a platformer developed by Sucker Punch and published by Sony on the PS2 in 2002. It recieved a HD rerelease on the PS3 on the Sly Trilogy in 2010. It's about the titular cartoon raccoon who sets out to steal back his family book of thievery from the gang who killed his parents. 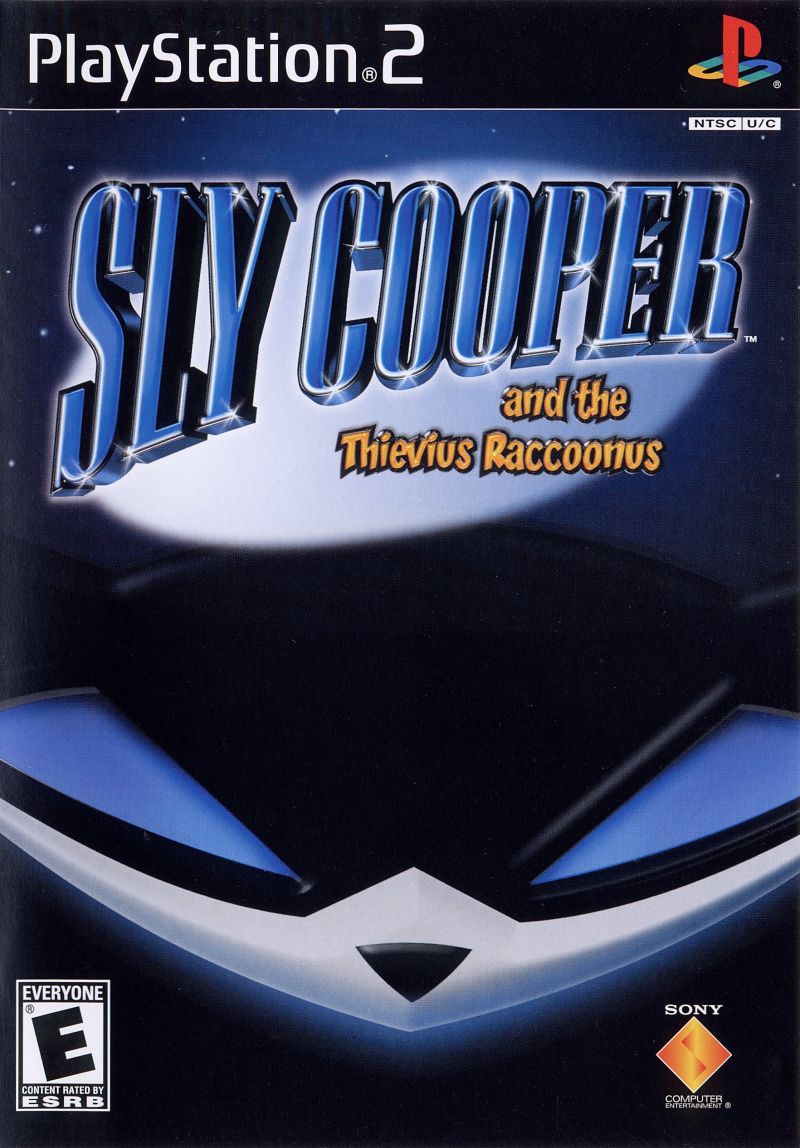 The most striking part of the game are the cell-shaded visuals that are clearly inspired 90s cartoons (and even a bit of anime for the Japanese version). The use of shading is just great, making for some really nice looks, especially when compared to more realistic stuff released at the time.

The enviroments still look good, but the models are pretty poor. They are just too simplistic up close during cutscenes (enemies at a distance are fine though), and animate terribly. There are just animation cycles all over the places that don't meld at all. For the sake of the perspective, one character even gets blown up to giant size, which looks really weird if you actually stand still and give it a proper look.

The animated cutscenes are also very simple, opting for something closer to Flash-style animation than classic animation. They're very stylish, so they get a pass, even if they're very brief.

The story of the game is extremely simple, as one would expect. Sly and his friends Bentley the turtle and Murray the hippo work together to stop each member of the Fiendish Five, while being chased by inspector Carmellita Fox.

Every member of the Fiendish Five is introduced with an animated cutscene that depicts their origin and motivations clearly, which is nice. Most actually have some tragic backstories for why they turned to crime. The levels also do a good job of reflecting the personalities of the bosses.

Most of the ”text” is relegated to voiced Codec calls between Sly and Bentley where they discuss the current goal or some new hazard. It's very gameplay-focused and the plot only ever becomes properly relevant at the end.

I like the story (the final confrontations between the final boss, Sly and Carmellita especially) and world, but it's really like an episodic cartoon where nothing major carries over between episodes. Bentley and Murray barely get any screentime either, which the sequels thankfully adressed later.

Master Thieving For Fun And Profit

To make the game stand out and to keep with the story, the gameplay is heavily infused with simple stealth elements. Sly is light as a feather (even triggering some musical strings when sneaking around), making it a cinch to navigate even the smallest of platforms. The physics on objects help as well.

But to make things even easier to control, Sly come equipped with his special thief moves, triggered by the allmighty circle button. Pushing it near blue sparks or climbable pipes pulls Sly towards the desired object and makes him perform the contextual action, like a climb, a swing or a duck.

It all works very well (resulting in some good speed throughout the levels), but there were a pair or so times where he insisted on going for an object on a lower floor instead of the thing in front of him, but I kinda blame myself for that, since he always goes for the right thing if you're in horizontal range.

The actual stealth is nothing truly impressive, but it's so simple that there aren't any faults with it either. The levels are riddled with searchlights and lasers that trigger alarms. Once an alarm has been triggered, everything turns lethal until you destroy the alarm horn.

And that's a real issue, since you die in one hit unless you have a lucky charm on you. Which is unlikely, since they are somewhat rare and earning them by collecting coins takes a lot of time.

Guards with flashlights are relentless, shooting homing shots as soon as they spot you, asking for perfection when taking them out. The game isn't asking much however, as nearly all enemies die in one hit and the flashlights are clearly visible.

The lethality and speed reminds me of Crash Bandicoot, except that the controls are better and enemies aren't immune to certain attacks.

Bosses don't incorporate stealth at all, instead opting for standard battles (plus two minigame ones) that can be rather difficult on one hit. But the patterns are clear, so with some practice they can be felled on the first try.

For the completionist, there are also time trials to beat, another thing that feels taken from Crash. But unlike in Crash, there are no differing grades to earn, you either clear them or lose. Most are pretty fun, but a few feel WAY overtuned for a children's game. I even had to cheat on one to get it done. But it says a lot about the game when it's so easy to turn up the speed without levels feeling wrong. I could do without the janky roll for extra speed however.

A common critique of the game has to do with the length, clocking in at about 4-6 hours. I do agree that a bit more meat per chapter would be nice, but I'm still impressed with what we get.

Every chapter is very distinct and the levels are littered with unique setpieces and assets, making them very memorable. It's also a bit nice to play a platformer with such flow. If you don't die, then a chapter is about an hour long each, which isn't far off two episodes of a cartoon, which is probably something they aimed for.

But with how short and simple the game is, it kinda feels like a PS1 game on crack (and with a good camera), making it a cut above many early PS2 games that reached for the stars and really suffered for it.

There are a few collectibles to be had, as expected. Coins are everywhere and can earn you lucky charms and even lives, should you have two charms on you. The whole economy of health and lives feels a bit inane though. You can grind both charms and lives freely in the first chapter's hub, but after that, lives just stop appearing naturally.

And since you need full health to earn a life through coins, it's really hard to get a decent stack come endgame. The game isn't hard, nor is a game over punishing, so the whole thing feels like an excuse to have the coins without giving the player anything to spend them on. And really, in what games do lives add anything to the experience anyway? They just remove checkpoints if you play too poorly.

Every levels contains a key that you need to unlock the next set of levels in the chapter with and the way to the boss. They aren't really interesting, much like the crystals in Crash.

What is interesting are the clue bottles scattered around the levels. These are mostly in plain sight, but require a complete run of the level to get. Once you have them all, Bentley can crack the vault code of the level and you get rewared with a page from the Thievius Raccoonus.

These pages give you new abilities, but most of them are quite useless, as the game is balanced for Sly with no abilites at all. You simply don't need them (except water and bottomless pit protection) when enemies die so easily. They're cool in concept, but don't get properly realized until the next game.

A good chunk of the levels are taken up by minigames. A few levels (like the twinstick shooting ones) are fun, but others are pretty frustrating. The racing in particular, which can get obnoxious as hell when the RNG physics of other racers puts them way ahead of you.

I can see the need of these, since a whole game with Sly's simple mechanics would probably be boring, but they needed a bit more time to cook. Thankfully, they don't overshadow the platforming, since the minigame levels are pretty short.