Resistance: Fall of Man is a first-person shooter developed by Insomniac Games and published by Sony for the PS3 in 2006-2007. Following in alien invasion in Russia, creatures known as the Chimera begin conquering all of Europe. It goes poorly for the human forces, so in 1951, the English and US government strike a deal to exchange support troops for a special weapon belonging to England. Among the American soldiers sent to help is Nathan Hale, a gruff man of few words who joins a counter-attack in York and ends up being the sole survivor. 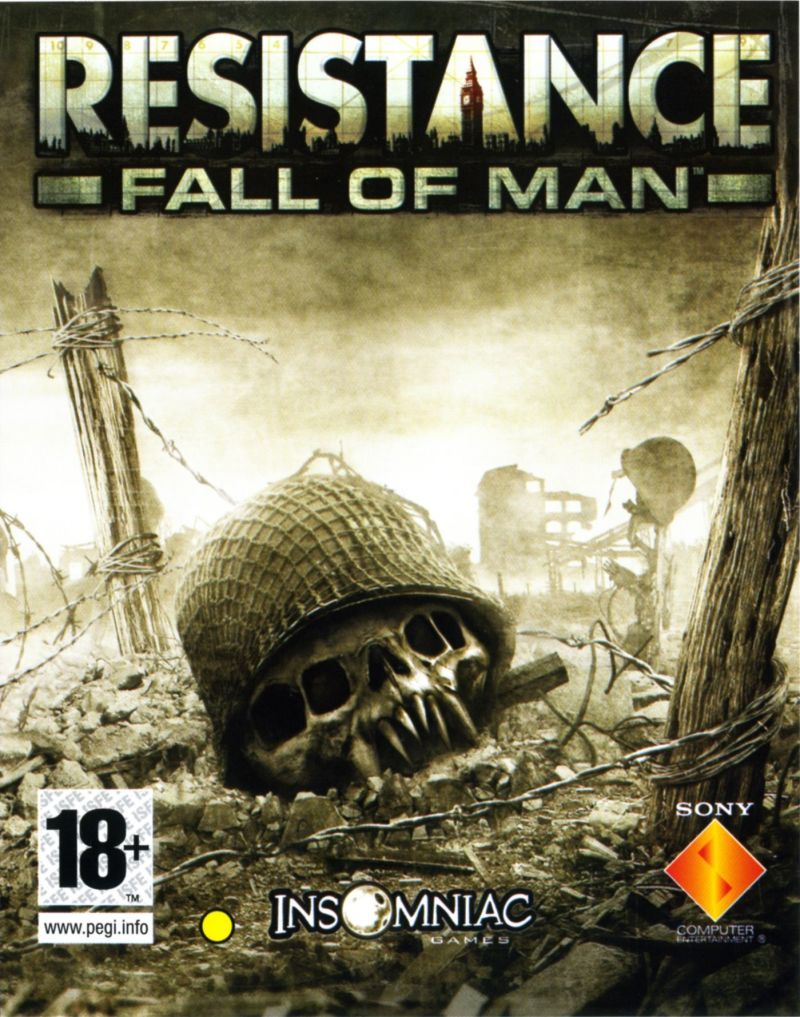 The narrative of Resistence is held together solely by the world-building and narration provided by the supporting character Captain Parker before and after every level. The gravitas she puts into each and every mission and lore dump is nothing short of extraordinary. By using her narration, dramatic music, maps of England and photo filters, Insomniac manages to turn what should be a pile of gravel and concrete into a really sick statue of an alien monster.

The Chimera are a really interesting alien threat, as they infect humans in order to convert them into footsoldiers, making them a bit zombie-like. A lot of work has gone into the inner workings of the Chimera, like how they propogate, how they change with time and how they fight. And the reason Nathan manages to stand against them is because he manages to resist the infection (hence the title) and aquires their regenerative abilities.

He has no character aside from an unending determination to kill as many Chimera as possible, but he still manages to serve the story well as a pure avatar of the player. His story isn't interesting at all, but it anchors you to the larger conflict between mankind and the Chimera, which ends in a really satisfying way.

Something that really helps offset the almost violent amount of gray-scale colours present are the game's guns, which take a page from Insomniac's Ratchet & Clank franchise. Aside from a few standard human weapons (the normal rifle, shotgun, sniper rifle and rocket launcher), you have access to quite the exotic array of weaponry. Not only do you get to use most Chimera weapons, but also some really weird human weapons based on Chimeran tech.

You can shoot through walls, throw reflect grenades, lay down goopy mines and assert aerial control over rockets like in Half-Life. Even the boring weapons have their fun aspects, as every weapon has a secondary function that either offers you finer control over the main fire or lets you burn a lot of ammo for a special attack.

The rifle has an awesome grenade launcher, the sniper rifle lets you slow down time, and the alien Auger allows you to set up a temporary shield that only it can shoot through. But my favorite secondary fire belongs to the basic Chimeran Bullseye, which lets you tag an enemy so that shots home in afterwards. You have to make a properly aimed shot with your limited tags, but if you hit, you're rewarded by not needing to aim until the tag runs out. Still, it's a shame that a few of the weapons are locked behind NG+. I don't understand why this was done, since the bonus guns aren't really stronger than the standard ones, only different. I suppose it was to incentivize replayability, though I still find the campaign plenty long as-is.

But yeah, the shooting mechanics are pretty grand, but there are some things that sour things for me. The first is how unforgiving the game can be. Lethality is high, enemies are plentiful and checkpoints are pretty lacking. I found myself cursing the game designer every time they dashed my hopes of a new checkpoint, especially whenever a Chimera ran up to me and took out half my health with a melée attack. Now, Nathan's rifle butting is about as strong, so you can usually manage, but I still could never properly internalize just how screwed you are when a normal Chimera gets close to you. You kinda expect the bullets to hurt more than a hammer fist, but maybe the Chimera are just that strong.

I think the reason the game is so harsh is to balance out Nathan's health regeneration and the power of his arsenal when used properly. Your health bar is divided into 4 segments, each of which can be regenerated up to the next dividing line by waiting a few seconds. To restore more, you need to find a health kit. So the game often strikes this nice balance of making it possible to hold your ground, while still incentivizing mobility across the battlefield.

I say "often", as it is still very possible to find yourself up against enemies you simply do not have the health to take down easily. You could probably manage through extreme sharp-shooting skills and proper use of the game's plentiful amount of explosives, but I still found it pretty harrowing from start to finish. That made things pretty exciting at times, but I still recommend playing on easy.

There are also some fun, albeit short vehicle sections to brake up the actions. Unlike the on-foot fighting, vehicles basically make you invincible, so they are quite relaxing when compared to normal combat, which is probably the intended effect.