Ratchet & Clank: Going Commando (AKA Ratchet & Clank: Locked & Loaded or Ratchet & Clank 2) is a third-person shooter with platforming elements developed by Insomniac Games and published by Sony for the PS2 in 2003. It was also shoddily ported to PS3 and Vita through the Ratchet and Clank HD Trilogy in 2012 (by Idol Minds) and in 2014 (by Mass Media Inc), respectively.

After saving the Solana Galaxy in the first game, the titular duo find themselves just taking it easy at home, thinking that no one needs a hero anymore. This belief is quickly shattered as the two heroes get teleported to the Bogon Galaxy by the CEO of MegaCorp. In exchange for special commando training and a job for Clank, he wants Ratchet to help him recover a stolen biological experiment from a mysterious thief. 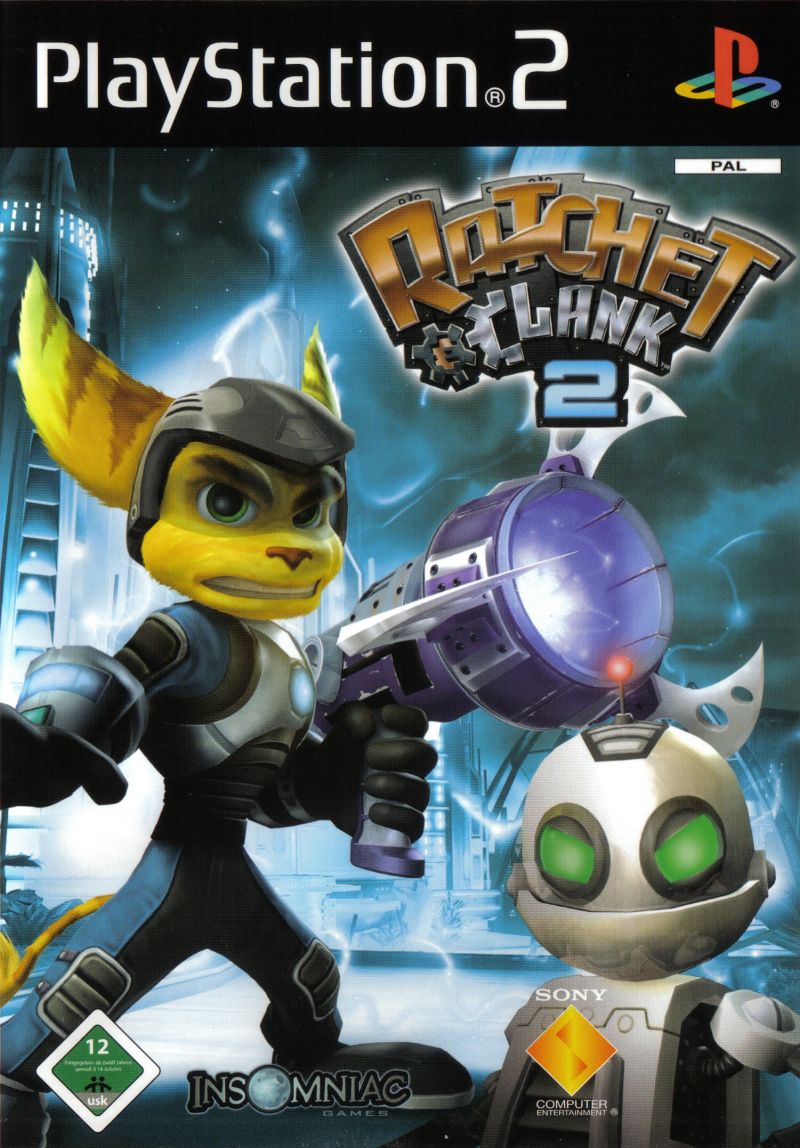 The story explores the same theme of rampant futuristic capitalism as last time, but this time almost exclusively focused on the impact MegaCorp has had on the Bogon Galaxy. They serve basically the same role in the backstory of the levels as Chairman Drek and Gadgetron from the first game combined. You explore a wide variety of their facilities while fighting their automatic defenses or the Thugs-4-Less mercenaries hired by the thief.

Cutscenes are funny and well-written (save for a few character's whose gimmicks fall a bit flat), but I found that many cutscenes ended very abruptly. Given the game's incredibly short dev cycle, I don't find this surprising, but the game would be better off if didn't transition to gameplay so harshly so often.

So, with the theming being so similar, what's actually new here? Not a lot, really. With Ratchet's relationship with Clank already established and his somewhat angry demeanour toned down (helped by the change to his now current voice actor, James Arnold Taylor), there really isn't any character development at play here. Ratchet and Clank are just that, Ratchet and Clank, a duo with good chemistry that keep the story rolling.

They do add a love interest of sorts for Ratchet, though calling Angela that is a bit wrong. The two are very "business-first" (trying to save the galaxy and all), so there really isn't much romantic tension there. Given the choice between shoddily glued together romance that eats up all the screentime and a more simplistic platonic relationship that works, I'll take the second option any day. You could easily see the two develop some feelings for eachother later on. But seeing as Angela got exorcised from the franchise after this game, that didn't happen.

Even with all that in mind, the game still leverages its setting to the fullest. It's still as conceptually nightmarish as the first game is, but given that it's all played for laughs makes it easy to forget that and just enjoy the interplay between the characters and all the kooky in-universe videos that introduce new planets to explore.

Going Commando And Beyond

Thanks to his MegaCorp-funded training regime, Ratchet has learned two new abilities that shifts the game from a slow-paced third-person shooter with platforming elements to a fast-paced third-person shooter with platforming elements. They aren't really major changes mechanically, but they are important enough to lay the groundwork for the rest of the franchise going forward.

The first change is that the weapon quick-select wheel now stops time, letting you swap weapons in the middle of battle without having to be at risk like in the first game. The second and much more important addition is the strafe button. Now, it was technically possible to strafe in the first game, but it was basically a hidden mechanic that was too awkward to make use of even if you found out about it. Not so here, as making Ratchet strafe, shoot and jump all at the same time is the key to combat. You can even strafe on walls while using the replacement for the first game's Magneboots!

It's amazing how much easier it is to fight your way through a level at a decent pace with this new ability. It isn't all that different, as I said, but it's like all the small misaligned pieces of the combat system from the first game have been slotted into their proper place here. Enemies now losing pieces of armor as you destroy them also adds to the feeling of carnage.

The weapons are also better this time around. The game makes a point of giving you access to a few weapons from the first game just to show you how much better the new ones are. Not only are they stronger and feature more more complex abilities (sniping, a charge shot, shielding), they can also be upgraded and customized.

By using a weapon enough, it'll upgrade to it's second form, which is almost always stronger with an extra secondary ability to boot. Except for the poor Lava Gun, which is a real downgrade, no matter what the damage numbers say. Platinum Bolts found in the levels are spent to add a few generic upgrades to weapons which do help, but don't feel that special when used. It would be better if you could influence the mechanics of the weapons further to pick between shot power and firing speed for example. 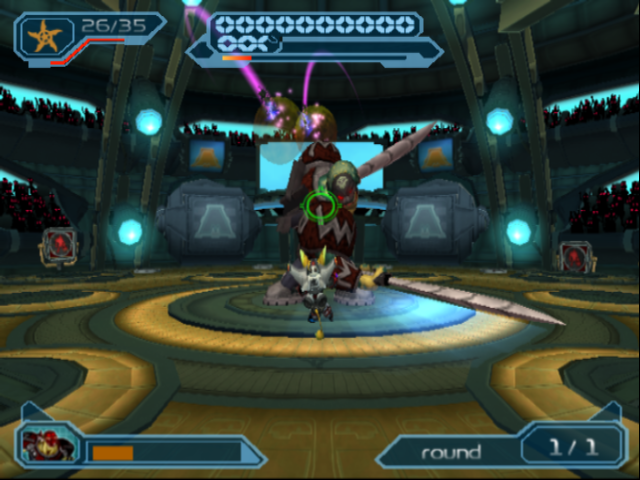 Ratchet himself can level up as well by defeating enemies. Doing so enough causes a violent explosion of Nanotech that kills everything on screen, refills your health to max and increases your health by one point. Suffice to say, it's a real kick when it happens. This solution to increasing health is much more pleasant than having to spend a large amount of bolts on it like in the first game.

Now, there are armor sets you can buy to achieve a similar effect as well, but I don't find them as vital as the health upgrades in the first game, since the automatic health increases are enough to finish the game with. And even if you should buy some armor, the game is kind enough with bolt payout that you can buy most of the weapons without grinding.

Bolts For Nuthin' And Minigames For Free

A large part of the improved bolt economy revolves around the various minigames available. They provide short distractions every few levels for very good pay. The best one of these is also the simplest, namely the battle arena. Here, you can fight to grind a small bit of experience, fight a few extra bosses and test out newly purchased weapons. It's a good time.

The vehicle-based minigames aren't as good, but still worth your time. Ship combat is more developed this time around and features its own upgrade system. Enemies are more aggressive as well, giving you less dead air while dog-fighting. MegaCorp racing is much faster than the Hoverboarding from the first game, though slightly less technical. But I prefer high-octane Mario Kart lite over the half-clunky reskinned Spyro skateboarding from the first game. A shame there isn't a split-screen multiplayer mode.

As part of the story, Clank is playable yet again for certain sections, as well as for two bosses as Giant Clank. The bosses are better than the Giant Clank sections in the first game, though somewhat monotonous due to their giant health bars. The standard Clank sections feel a bit inconsequential. They're shorter than the ones in the first game and introduce new robots to order around. These are good changes, but the result isn't that exciting. You'd think it'd be more cerebral to traverse areas by ordering various types of bots around to solve puzzles, but it's really just a matter of using whatever you have right now and moving forward. Hell, one of the new bots is only used once! 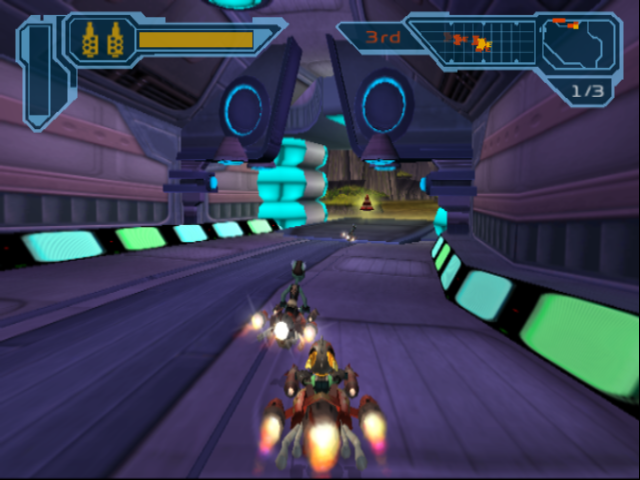 I know the first game introduced a bunch of minigames and unique gameplay sections that set the standard for the sequel, but I think at least one of them should have been cut to make room for the others to grow. Or maybe give the game a sane dev cycle that's not just a year long.

Gizmos, Gadgets & Planets To Use Them On

Being a Ratchet & Clank game, there are of course a wide selection of gadgets to use when exploring each planet for the way forward and optional goodies. Almost too many, since just like with the mini-games, they aren't all used to their fullest potential. Some things are used more than others, and as a result of this, you can count the amount of times you use some gadgets on one hand. The game really goes for variety over depth, which helps with the pacing and makes it exciting to get more gadgets, but some gadgets feel superfluous or under-used.

It baffles me that there are two door-opening gadgets for example, one built on perception and reaction speed while the other tests your memory and willingness to endure trial-and-error gameplay. One of these should suffice, and yet there are two. I think this is to reinforce the slightly larger focus on backtracking and exploration in this game, since you get them at different points in the game.

While you can rush through the game, I found it really rewarding to explore each level properly. Beyond the Platinum Bolts, there are some nifty side gadgets and a few health upgrades to find. Of special note are the the two sandbox levels, which contain gigantic deserts filled with crystals you can trade for bolts.

These levels are somewhat hard to navigate due to how similar it all looks, but for casual play to earn bolts, they're excellent. Finding all the crystals for Skill Points (for unlocking extras) is much harder unless you are really careful when filling out the map. But the game offers quick transportation at the very least, so it isn't completely tedious, just somewhat tedious if you're unlucky.