Oddworld: Stranger's Wrath is a first-person shooter with 3d platforming elements developed by Oddworld Inhabitants and published by EA on Xbox in 2005. It has since been re-released on PC, PS3, Vita and OnLive (why?) in 2010-2012, iOS & Android in 2014, Ouya in 2015 (also why?) and Switch (through Microids) in 2020. It stars the titular Stranger, a bounty hunter who spends his days chasing outlaws for money in Western Mudo so he can pay for a special operation he needs to live. 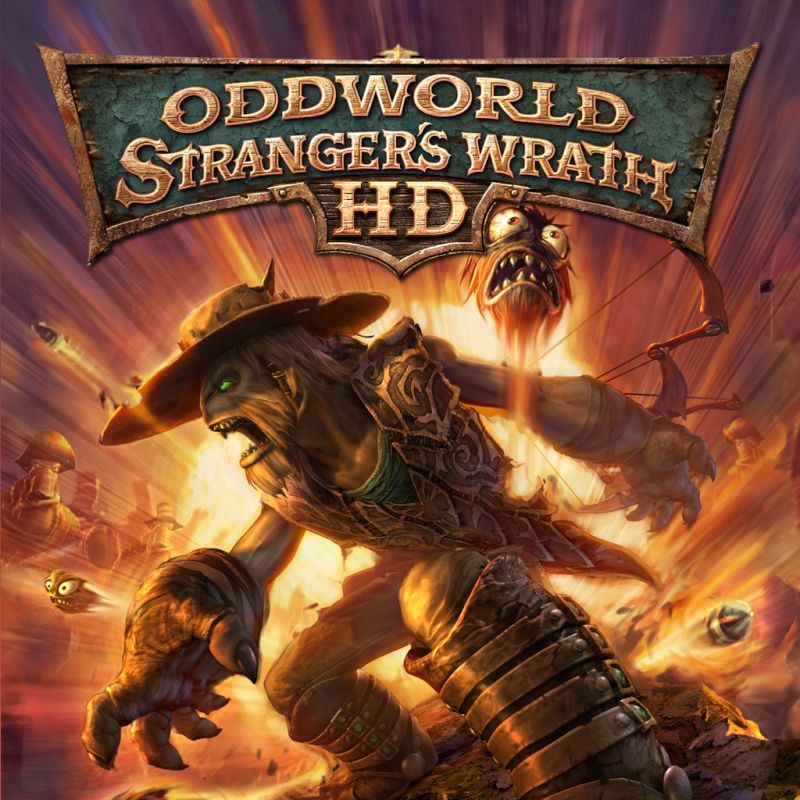 Who Are You, Stranger?

The story of Stranger's Wrath is a bit out of focus, but the central premise is rock solid. Stranger's plight to put himself in danger chasing outlaws to pay for a vital operation is very easy to empathize with. And the game does a lot with this premise, which leads into the overarching environmental themes of the series, not to mention the game's own themes of heritage and identity, which are pretty strong.

But I found the story difficult to focus on, as cutscenes have no subtitles, are pretty poorly directed and the voice acting leaves much to be desired. Stranger and the game's main villain, Secto, are voiced by the same person and sound very similar to eachother. Not to mention that most of the NPCs use the same sound-modulated voice as well. It feels like this is a concession made due to a severe lack of actors for the project. Wouldn't surprise me if there were only 3 or 4 listed in the credits.

Outside of the pre-rendered cutscenes (which are well done), the game's cutscenes are rather sloppy, which is weird, as there aren't very many, so I don't know why they didn't get more attention. Some better camera work and character animations would do wonders for these in-engine cutscenes. Still, it's a nice story due to how well it plays into its unique strengths.

Stranger's Wrath is a shooter unlike any other. Not only can you switch between third person for some light platforming and first person for shooting, the actual shooting mechanics are a lot more indirect than what is common for the genre. Stranger is a bounty hunter, so he needs to capture outlaws dead or alive, with a live catch being more difficult than a dead one. But catching criminals alive pays a lot better, incentivizing a more careful approach.

Your approach is dictated by the ammo you use for Stranger's crossbow, which are various kinds of critters that you need to stun and collect in order to use them as ammo. Each "living ammo" type serves different purposes and deals differing amounts of stuning damage and lasting damage. Most enemies can be stunned easily, but will recover quickly and take longer to bag while still alive. Killing enemies takes more ammo and effort, but this makes them much easier to catch as long as you remember to bag them before they fade away.

It's an interesting dynamic, reinforced by the light stealth mechanics. There isn't really a good way of being quiet when dealing with outlaws, but there is a critter designed for separating outlaws who haven't seen you and there's also some grass to hide in, which helps with thinning out groups. It won't take long for hell to break loose though, at which point the mechanics really shine.

While hiding and waiting for everyone to reset is often possible, I found it more interesting to engage in some back-and-forth guerilla tactics. Running in and out of enemy sightlines, keeping on the move and stopping to bag knocked out outlaws and slowly thinning out their numbers through various lethal and non-lethal means is very satisfying. I'd call it "high-octane stealth", as in-the-moment risk assessment versus potential pay is always on the player's mind.

Sadly, that's not all the game throws at you, as there are quite a few battles and bosses that outright require you to kill enemies as fast as possible just to keep yourself safe. Stranger restores health by standing still and shaking off the damage, but doing so takes stamina, which only recovers at a decent rate if you stand still or bag an outlaw.

As such, if you don't make the most of the stamina you start a fight with, you're gonna have a bad time once it runs low, since standing still to recover or bag an enemy is harder the more hostiles are trying to kill you. I think a lot of the strife I endured playing was due to me wanting to catch more criminals alive than is necessary (upgrades aren't very expensive, especially if you capture bosses alive) and because I forgot to use the game's quicksave feature to make my own mid-battle checkpoints.

If you learn from my mistakes, it's not so bad until the endgame, where the game really goes off the rails with the amount of danger present. Especially when it comes to an escape sequence full of enemies you don't have time to fight while you run. There's also a miniboss in the endgame that is immune to stun ammo and is built around stunlocking you until it kills you. I really like the mechanics, but if I'm ever replaying the game, I'm bumping it down to easy mode.

Western Mudo is obviously modeled after the Wild West, but it manages to create its own dry (and later not-so-dry) atmosphere. A good chunk of the game consists of cramped canyons and run-down cities populated by humanoid chicken people. In each city, you pick a bounty, do some light investigation to learn where to go and then you go through a linear level that ends in a boss and quickly takes you back to town afterwards through handy shortcuts. It's fun gameplay loop to play a level, tally up your pay and then spend it on some upgrades before moving on to the next bounty.

Thankfully, that's not all the game has to offer, as the further you move from the starting town, the more the environments change to offer more greenery and water. It's not a complex game world, but there was still some effort put into making it diverse, sorta weird and be more than a bunch canyons where you shoot criminals with exploding bats in.