Traveller In Playtime – Harry Potter and the Prizoner of Azkaban

Harry Potter & the Prizoner of Azkaban (for PC & PS2/GC/Xbox, the GBA version has been excluded from this review) are a pair of game adaptions of the movie and consequently the book of the same name. They're made by EA and were published in 2004. The story concerns Harry Potter and his encounters with the titular prizoner, as one would expect.

Seeing as these games are adaptations, I see little value in talking about the actual story. The games are condensed versions of the movie, for the most part. But I am interested in comparing these two distinct versions of the same game to see which one presents the plot (and the world of magical Britain) the best.

The PC version naturally looks and animates better, but the console version has some fun little touches to the animations, even if you can see how strained the whole thing is. For whatever reason, the console version features a gigantic seamless rendition of the outside grounds of Hogwarts (used for some potion ingredients and two minigames), while the PC version's outside area is highly restricted in size.

That area chugs the console version something fierce, as one would expect, but the biggest annoyance with that version is how often you're thrust into medium-length loading screens. If you stay the intended path, they're not too bad, but if you play like me and run through the floors of Hogwarts after every new spell claimed, it gets on your nerves. 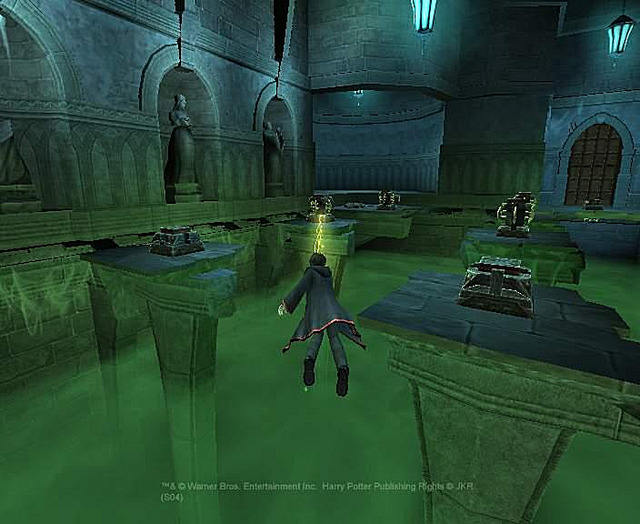 Which is a shame, as exploring Hogwarts is one of the reasons why the Harry Potter games have achieved their small success. The setting is basically cheating when it comes to making a game and it's always cool to see game developers put in magical creatures or invent new spells.

As a last thing, I feel like the console version ends much too quickly. The narration goes through so many plot points that it almost trips over itself. And between the two scenes at the lake, the PC version adds a small final level to give some breathing room between all the drama, which is appreciated. The console version has some unique story elements though.

Neville gets stuck with a ghoul, Malfoy tricks the team into the dungeons and Snape sends you on crazy quests for potion material. It's moments like these that showcase how much potential a whole school year leaves a game designer. If anything, I'd want to see a non-canonical/pre-book game where they don't have to pay lipserice to story beats and can just focus on new characters and some lore.

I bet it'd be better than the warcrime the property has indulged in as of late.

Might as well get to the highlight, which is exploring a sort-of fully realized Hogwarts. Let's start with the PC version.

Yes, this is the Gamecube version. Sue me, why don'tcha?

It's the simpler experience, requiring little beyond the ability look around. You just go through the current area and aim your wand at anything that looks suspicious. The game will cast the correct spell for you and either progress or goodies are soon to follow. There is a small amount of platforming, but it isn't complex at all.

In spite of all this, I find the exploration really fun. It's not challenging, but it's cool to see the enviroment react when you cast spells. Some of the secret areas are pretty cleverly woven into the main path, even if they aren't well hidden.

The console version (and all the previous sixth-generation games) apes after Zelda, making for some more meaty exploration. The big thing is that you have free access to Harry, Ron and Hermione, unlike the automatic switching done in the PC version.

Each one of them have their own spells and ”special” ability. Harry can jump, Ron can open secret doors and Hermione can crawl. This means that you have to constantly switch between them to progress. And wouldn't you know it, there are some actual puzzles! 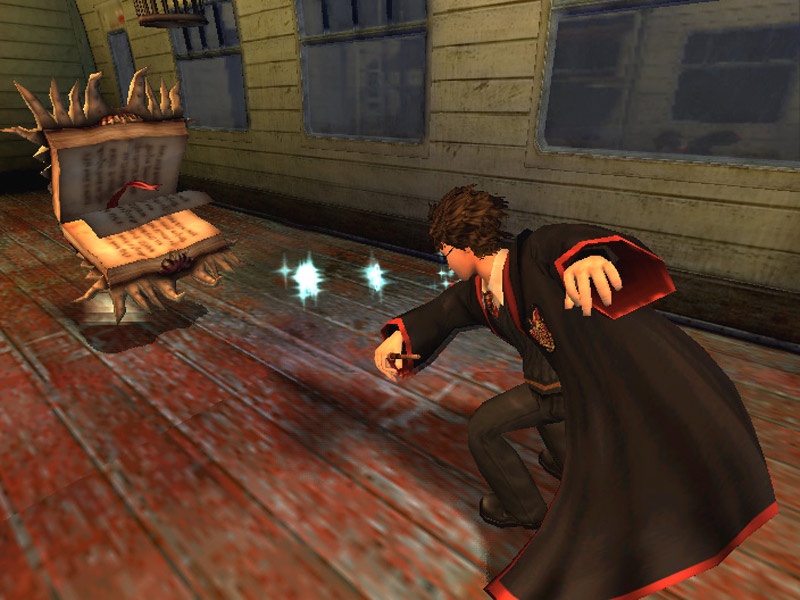 The characters speak up to give hints, but even so, there is enough to keep your brain occupied for a little while. There are a few puzzles I really like and none of them were confusing, save for one potion ingredient.

Sadly, the game is too short to really live up to the potential on offer. You don't really have to combine what few spells you get and a some of them are rather boring. And the character swapping doesn't ever go beyond what you do at the start of the game. The basic idea of the game has merit and deserves further exploration.

There's also some simplistic stealth sections, which are ok. They're only difficult if you're dumb and try to go for shinies when there are teachers on patrol. The controls for standing up against walls and looking around corners could use some work, but you don't really have to do that. Hell, it feels like a feature built only for taking spiffy screenshots to put on the back of the box.

Staying with the console version, there are a few distinct collectibles to be found. The first one are the famous Bertie Botts beans. They're a mainstay in the games and kinda annoying in this one.

Just like in Zelda, you have a wallet limiting your capacity to incentivize constant spending. But to even fill said wallet, you need to play as Ron and rummage through bookcases and get beans one at a time. It's rather tedious and silly, since the game could've lessed the amount of things that give you beans and just increased the amount you find. Making it easier to hit things that drop beans would also be nice. 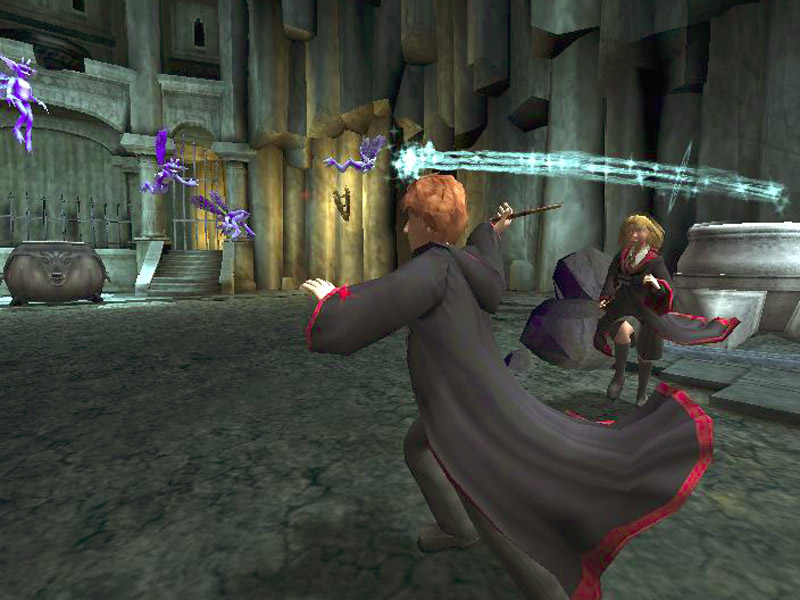 You mainly use them to purchase wizard cards. These can also be found all over Hogwarts and completing a set increases health for one character. Very standard stuff.

Each character also has a challenge collectible to focus on, but I'm pretty sure that Hermione's is the only one worth caring about, since it gives everyone major spell upgrades.

The collectibles in the PC version match that game's manic pace, as it loves just showering you with goodies of multiple kinds. Those kinds being beans, pumpkin pasties and cauldron cakes. These are used to buy cards which don't really accomplish much beyond giving you a line of lore.

It's very much a game of collecting for collection's sake, kinda like DK64, except not as crazy. It's engaging to a point (especially the super ultra beans bonus room awarded for 100%), but the game doesn't really care if you collect anything until you reach 100%.

The combat in the PC version is exactly like the exploration, as you use the same spellcasting system. It's just a matter of strafing and ABSOLUTELY MURDERING anything in your path almost as fast as you can press the mouse button. You can also engage imps in mortal wizard cracker throwing. It's flashy and sorta fun, but not challenging in the slightest, save for the dementor battles, which actually take timing and planning, something the rest of the fights lack. 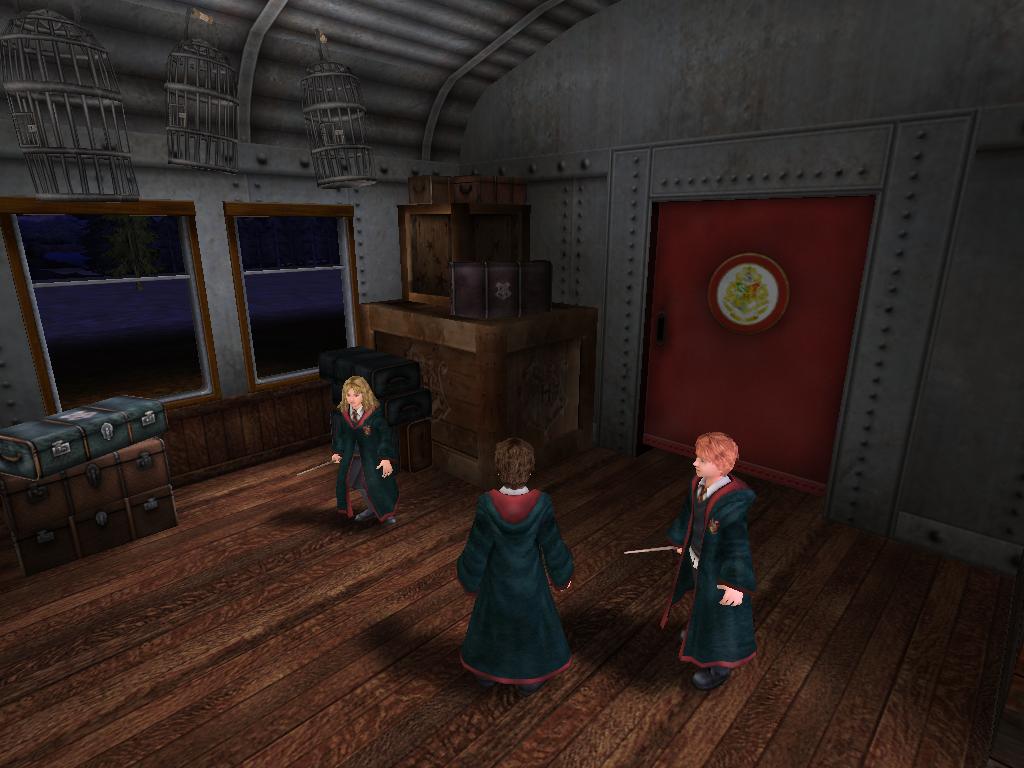 The console combat goes down the Zelda route, but doesn't quite nail it. The lock-on is janky and doesn't switch to new targets when the old ones go poof, which is slightly disorienting. And to balance out the fact that you often have three people, some enemies have stupid amounts of health.

But I have to commend it for asking the player to use spells to weaken enemies, even if it's often just a one-step process to make them vulnerable. The bosses are a bit janky, but they manage to be somewhat memorable, as they put your newest spell to the test.

There's also a spell that parries magic and deflects it back at the caster. You only use this spell against Malfoy & his goons and in the wizard duel minigame, which is a crying shame. The animation is pretty dope and requiring it in the rest of the fights would make it much more interesting.

I feel like these were the last of the acceptable Harry Potter games and you can see some ideas that have grown over the entries in here. But alas, they just aren't well-made enough, in spite of all the fun ideas.

And just for kicks (and due to nostalgia) I'm gonna call the PC version the winner here, since it flows and runs better, even if the console version has more interesting ideas that weren't given the focus needed. 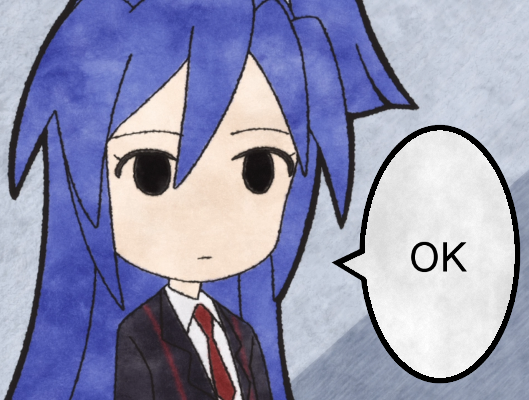