Traveler In Playtime - Tales of Symphonia: Dawn of the New World

Tales of Symphonia: Dawn of the New World is a JRPG developed and published by Namco Bandai in 2008-2009 for the Wii. It was later ported to PS3 in 2013-2014 alongside its prequel in the Tales of Symphonia Chronicles collection. Following the conclusion of Symphonia's story, Dawn picks up a few years later and centers around the new protagonist Emil. He lays witness to the previous protagonist Lloyd killing his parents, dooming him to a life of abuse at the hands of his aunt and uncle. In a chance encounter, he meets a girl named Marta who claims to have been saved by him during the massacre that killed Emil's parents. They team up, and Emil gets bound to the power of the lord of monsters, Ratatosk, who sleeps within Marta. Now a knight of Ratatosk, Emil together with Marta embark on a journey to avenge Emil's parents and revive Ratatosk to remedy all the monster-based catastrophies plaguing the world. 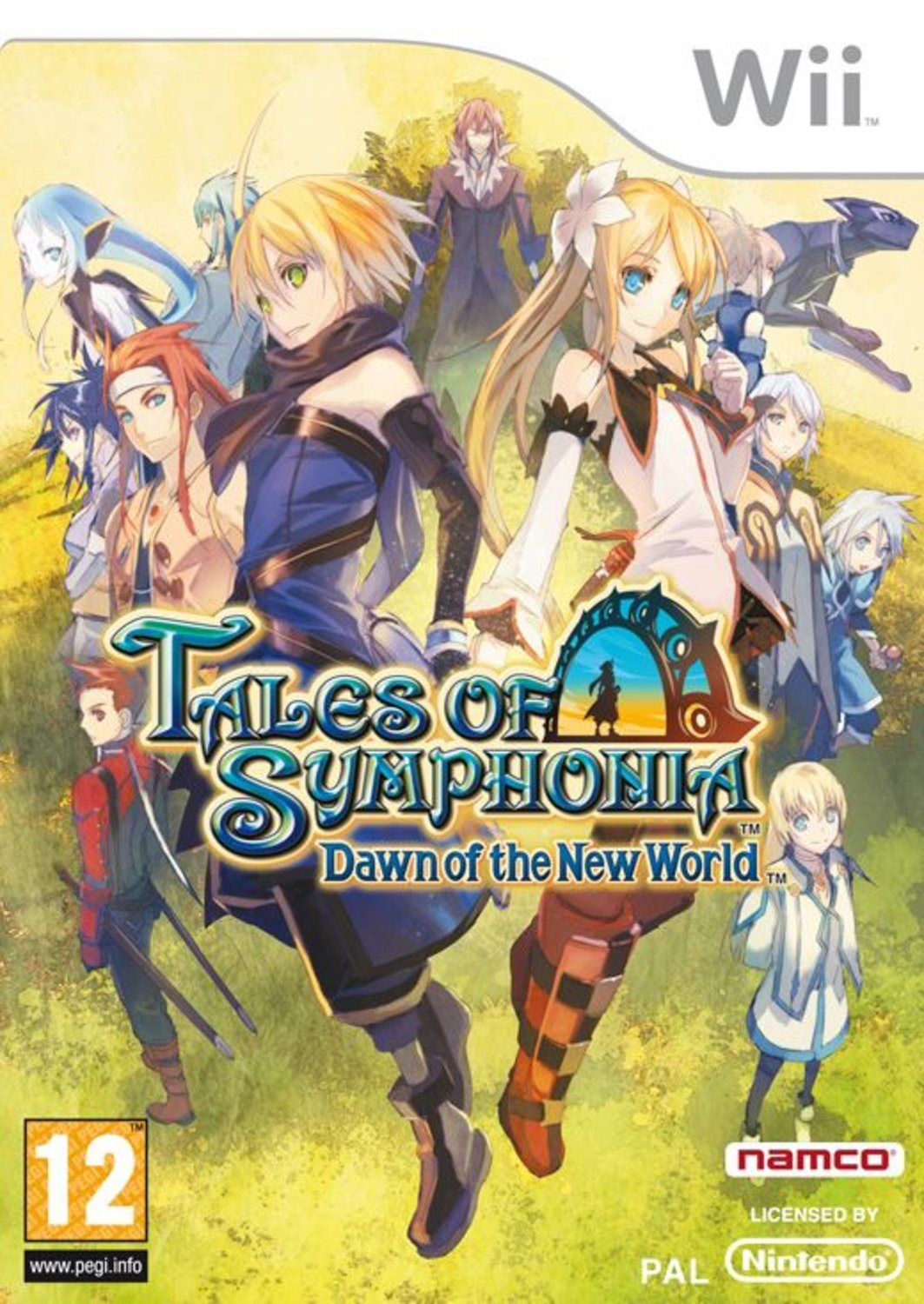 The Doormat Of Symphonia

Emil is an interesting protagonist for a JRPG. Simply put, he is as timid as can be and apologetic for just about everything he does, probably as a result of his terrible adoptive family. What spurs him on is his freshly made relationship with his very own red-headed swordsman, somehow unconnected to the one Lloyd befriended in the first game.

Richter tells Emil the game's (overused) arc words, "Courage is the magic that turns dreams into reality.", to sort of get him to be less pathetic. From there on out, they form a weird relationship that develops alongside Emil himself. Emil's other big relationship is with his galpal Marta. She's in the ballpark of being a manic pixie dream girl, since she's so upbeat and love-dovey towards someone she barely knows.

But the game manages to save her through the connection of her character arc and Emil's. Emil spends the game trying to live up to the ideal Marta has convinced herself is the real Emil, to limited success. Marta then starts to see what he's really like and begins to accept his actual qualities as a person. Making this a bit more interesting is the addition of Emil's secondary personality, which is only supposed to appear in combat as an effect of the pact. Johnny Yong Bosch does a great (if hammy) job of jumping between timid Emil and giant edgelord Emil. The interplay between them over who is better plays well into Marta's struggle over who Emil is to her. Through the two Emils, the game also explores what masculinity entails, which gets a thumbs up from me.

But somewhat tight interplay between two characters comes at a cost. The setup for the game is a compromise I haven't seen before in a sequel, and I quite respect it. With Symphonia's story being done, you can't really do a standard sequel story without stretching the setting and characters. So instead of giving us a whole new cast or shoving everyone from before back into the limelight, Emil and Marta take point, while the old cast shows up as guest party members. So outside of the main plot, you basically get an extended epilogue for the old cast showing what they're up to after the first game.

Not everyone is up to anything special (further showing how done their story is), but it's still nice to run into people every other chapter or so. I do wish at least some of them were given a bit more agency in the story, outside of just Lloyd. I have to commend them on giving Genis a slightly deeper voice and making him less than an inch taller though. Shows they cared.

I'm torn on some other parts of the story. The tone is a few degrees goofier, some villains especially so. It isn't unreasonable to make this change, but it doesn't gel with the serious tone of the original game as well as it could. Also, the racism from the first game has been replaced with xenophobia, which drives the story's two major factions. It isn't a terrible change, but it's strange to see a whole world shift gears so quickly. Then again, the point might just be to showcase how easy hatred endures and how important it is to show forgiveness. Overall, it's an entertaining little tale, though less ambitious than its prequel.

A lot has been done to remove the rough edges of Symphonia here in Dawn. With the elimination of a nearly useless traverseable overworld in favour of a map screen, the pacing has improved a bit, shaving off an hour or two worth of travelling. All of the returning locations have been redone as well, looking just a bit prettier than in the Chronicles remaster. They even made new models for the returning cast, which I welcome.

But they went so far as to recycle dungeons as well. A lot of dungeons. And while the puzzles are mostly new, you still have to redo the majority of the last game's dungeons with only minor twists to keep things interesting. The pacing is good, so you won't be stuck in them for long, but it's still dissapointing. At least they put in the budget to fully voice the skits this time. Always a treat.

Kneel Before The Lord Of Monsters

As a consequence of only having two proper party members, another compromise was made to the game. To fill out your party roster, you have to catch the monsters you fight. But if you try to threat this mechanic as a Pokémon game, you're gonna have a bad time. Let's start with how it works.

To catch a monster, you need to change the element of the battlefield by charging it with an element through attacks using the same element. Monsters defeated at that point are spellbound, and only one of them can be caught. Then it's a crapshoot if you can get it or not, even if you influence the chance of capture by using their element and getting help from a strong enough monster of the correct type. Stronger monsters are harder to catch, so you can only really catch the basic ones without going crazy.

And once you do that...the mechanic becomes useless. For you see, there really isn't much of a reason to use a varied team of monsters. Their abilites are very similar in effectiveness and you can shove a healing ability onto every monster you keep for very low cost. Not only that, but monsters evolve into the next form every 20 or so levels, so you can just keep the same ones through the whole game and not suffer one bit. I recommend a party of nothing but bears, if only for the novelty.

To Battle, My Minions

Combat is an extension of what was done in Symphonia, with some nice tweaks here and there. Just like the first game, there's only one fun character to control, namely Emil. It's a shame Martha isn't better to control, since this is their game to share. Emil is even faster than Lloyd and with the small changes to gravity, slightly more fun to play as in my eyes. Almost to a fault really, since air juggling is so easy and solves most of your problems.

The aforementioned elemental grid doesn't really matter outside of capturing monsters, as even when a boss has their element active on the grid, the small health regen it gives them barely matters. Same goes for your monster minions, since you can't control them and most of them are rather inactive. To balance things out, Dawn isn't as lethal, so you don't have to force your healer to spam multi-target healing every second, so that's nice.

Something else that's nice is the simplification of the skill acquisition system. Or rather, the elimination of it. Instead of faffing about with EX gems and the character's skill type, you just get stuff as you level. Some might think that boring, but it sure beats having mutually exclusive skills that are tedious to pick between. Another welcome change is the buff to the Unison gauge. It now fills faster and is split into two halves. Spending half a bar lets you use a weak unison attack that combines Emil's attack with a party member's for a bit of extra damage. But you can also burn the whole bar (plus 50 TP) to trigger Emil's Mystic Arte for a good chunk of damage. These changes adress my complaints about Symphonia's super attack, since it's much easier to make good use of and with the bar filling faster, it's even viable to use the unison attack defensively to cancel boss attacks.

Just like in Symphonia, there are a bunch of story-based quests to partake in. They usually deal with some side plots and are generally pretty ok. The ones with Richter and Emil are my favorite, since it gives the game more room to flesh out their relationship. But to actually do them, you have to be extremely manic. All the questlines are dependant on you finding easily missed scenes all over the world with close to no indication on where they are or if you have done everything for the chapter. It's an absolutely aggravating setup, so I understand why there are no direct gameplay rewards for doing them.

To fill that niche, the Katz people have set up a quest system. This is where you'll find new dungeons and somewhere to grind should the need arise. While it's a neat addition, it falls apart after a while. The few new dungeons exclusive to these quests are simply reused far too many times. Hell, they even recycle the miniscule story excuse for doing them too, making it seem even lazier. You can only run the same cave dungeon to give monsters weird medicine before it gets boring, you know?