10 Things You Don't Know, Nor Care About, Kazooaloo

1. The nickname Kazoo came from work:

I was very tired at work, to the point where I would just laugh if you said "blue" funny. For some reason, I couldn't exhale laughs, but when I inhaled I squeaked.... loud. And it wasn't once, more than 10 times. My friend Dan described it as a "kazoo getting kicked in the nuts." That night I told the story to one of my friends over AIM, to which she went "So you're a Kazooaloo." Wait, what? Well it's original. Better than GM_Link, I'll say.

2. That same friend, Dan, recently got my hooked on Warship Gunner 2,

Okay, seriously. Has anyone played this game? You wouldn't think naval warfare would be fun. But when you get to create your own battleships and decimate everything in your path? Come on. I've got a battleship with 11 28.7cm 50-cal Double Barrel Cannons on the front of my battleship, and I'm only 5 hours into the game and there's still another good 20 hours left. Most ships run when they see me. ^_^

3. Canderous Ordo is my default character when I have no ideas.

Ever have that moment where you want to create a character or what not, but you can't think of anything? Well, for some reason Canderous Ordo from KotOR is my default character. He's the guitarist in Rock Band, he's roaming the fields in Fallout 3, hell even my Japanese Xbox Live account is named Candalore (mix of Canderous and Madalore, who he was in the second game) with the avatar looking as close as I could get it.

4. I won an all Servbot match on Marvel vs. Capcom 2

My default team is Wolverine, Mega Man, and Jill, though everytime she goes "I'm a member of S.T.A.R.S." everyone in the room shouts "SHUT UP!" at the TV. Though at my last game party, once again, Dan and I decided to do an all Servbot match. It lasted about 10 minutes, with the majority just going into the other room to play Halo 3.

5. I owe all my laziness to Tech Theater in high school.

The first year I was lighting crew, then lighting director, then technical director. Sure, I constructed sets, painted, ran lumber runs. But in all honesty, as part of the lighting crew, you don't really do anything. You just sit there, waiting for time to run down so that you can do something. Usually all lighting stuff is done last minute when all the sets are constructed. So, the majority of my days were going up into the lighting booth, lying down on our couch, and playing video games.

I used to own it on just Xbox 360 and Wii. I bought it on Wii just because when I go to Otakon, I'm the one that usually brings the Wii to the hotel rooms. So if I don't have Mega Man 9 in a room with all kinds of Mega Man fans, I'll be skinned alive. Though I did buy it on PS3 when I was on campus, UMBC, and was bored in the gameroom. So I ended up buying it and putting it on the PS3 so I could play something.

My sister has the Mass Effect stand they put up in GameStop's when they were promoting the game. For the holidays, she put a santa hat on him. The result: 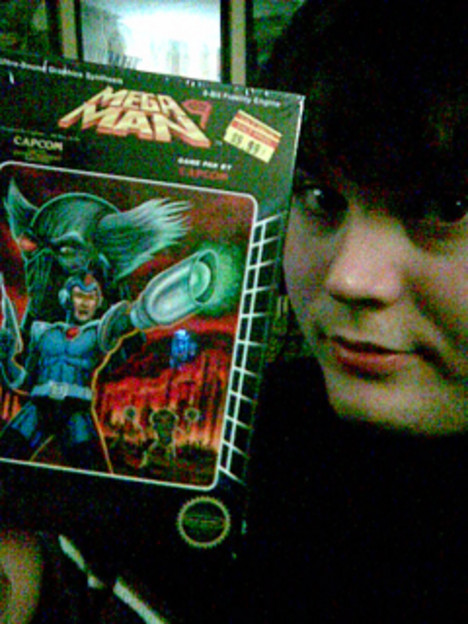 -Kazoo
#Community
Login to vote this up!