Doom: To Switch or not to Switch 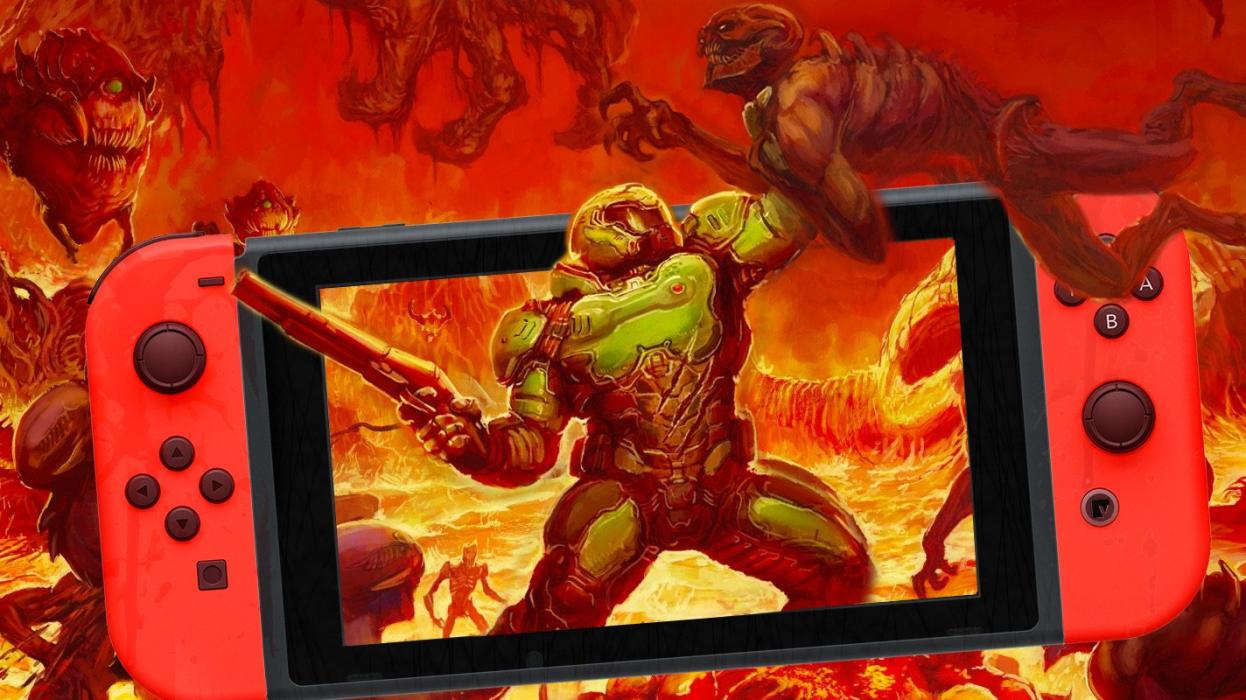 So as many of you know, Bethesda and id Software's hit first person shooter Doom (2016) has successfully been ported over to the Nintendo Switch. From an outsider's perspective, this feels like an incredible feat, one that most certainly took a lot of time and effort (thanks to Panic Button Studio). The question lingers though - was this an incredibly bold, revolutionary move...or was it a risk to try and cram such a hefty shooter onto Nintendo's gaming tablet?

I make it no real secret that I'm a big Nintendo fan. In fact, I'm quite the fan of the Nintendo Switch, which in my opinion has soared ever since it's launch (knock on wood right now). I'm also an avid Doom fan - when I was but a wee lad, I used to sneak back to the Electronics section of Wal-Mart to play the original Doom on a display pc (which I'm pretty sure wasn't supposed to have it installed). It terrified me...but more importantly, it made me fall in love with the first person shooter genre.

I've spent many hours already grinding it out in multiplayer, and squashing my way through hoardes of demons on the Nintendo Switch. While my general impressions are pretty positive, there are some very serious draw backs to this version of Doom. 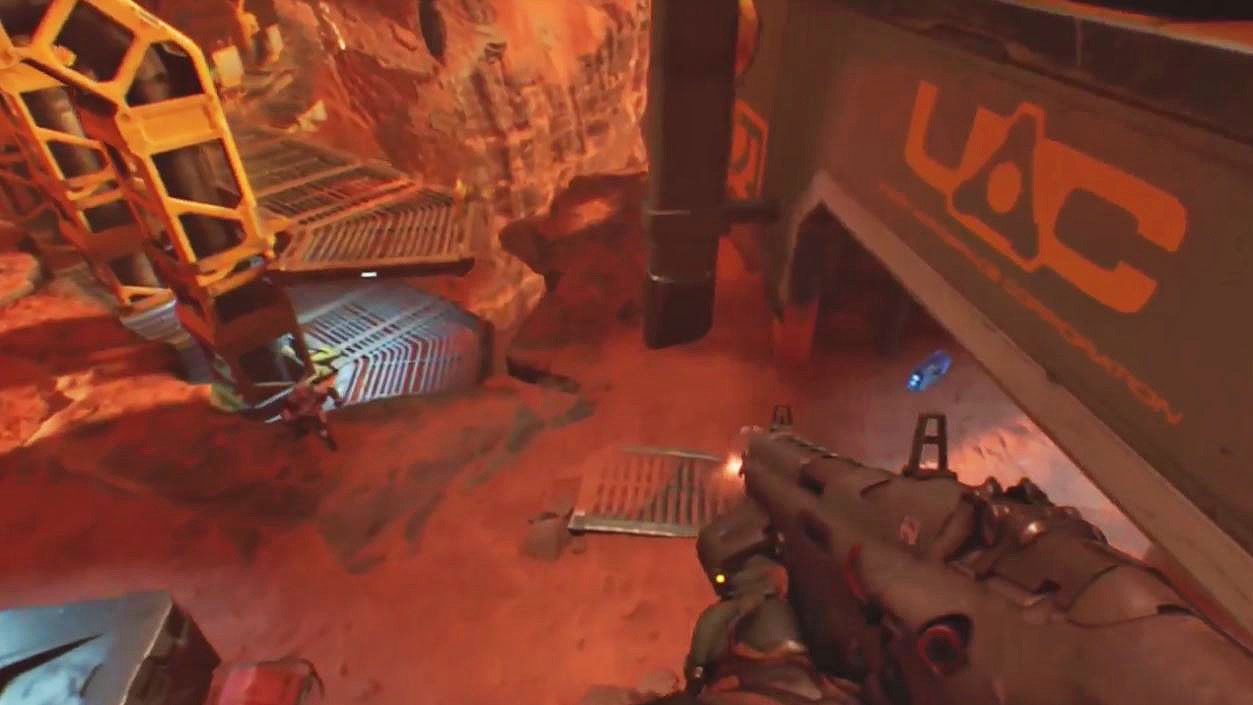 I'm going to try to just keep it real and share the obvious impression that, yes, Doom indeed does not look as good on the Nintendo tablet as it does on a PS4/Xbox One/PC. That much should have been obvious from the moment it was announced. I will warn you that it does make gameplay a bit more straining on the ol' eyes (especially in handheld mode), as visuals are generally more muddy, and a bit less crisp in detail. The fast paced, frantic action of Doom, however, is going to keep you engaged, and the lack of visual detail is nothing to fret over here -- in other words, don't let the watered down visuals scare you away; this is Doom in all of it's glory, and it still looks great, especially when in action.

The more concerning drawback is the lack of a consistent frame rate. Yes, Doom generally strives to hit 30fps on the Switch, and that would be totally fine if it could hit this mark consistently, however the poor Switch struggles to pull this off. In light combat and when roaming around, you'll have no issues adjusting to the the steady 30fps. That being said, when the action gets heavy, you're going to find your gameplay experience slowing down quite a bit (sub 20fps in extremely packed arenas). For the record, this is not an issue throughout the majority of the game, but it certainly will factor into your experience in both the campaign and in multiplayer -- bottom line is this is going to effect everyone differently. Some gamers don't get overly worked up over the dropping of frame rate, others will be foaming at the mouth. Personally, I find it a bit disappointing, however it hasn't slowed down my momentum yet.

Essentially, you are getting the full Doom experience on the Nintendo Switch, with the exception of the SnapMap mode. The campaign remains fully intact, with all of the same thrills and hurdles that you'd expect on the PS4/Xbox One/PC. As a bonus, levels and rune challenges load up a few seconds faster than they even do on the PS4, so that's a neat little factoid (though the One X and/or a high end PC will certainly cut the load time down even further). Multiplayer pacing will ultimately depend on your connection, and the connection of your opponents. This will vary greatly, especially for those who are playing on the go.

Mario Odyssey and now Doom are the first games on the Switch to actually make me take advantage of my pro controller (even though Nintendo makes it very clear which method they'd prefer you to use for Mario). I have to say, as someone who has played Doom with an Xbox One and PS4 controller, this game feels fantastic in using a pro controller. I'd dare say it's my controller of choice when playing Doom now. The joy cons on the other hand, are simply not built for this game. Don't get me wrong, I've had a lot of fun playing Doom in handheld mode - portability is one of the biggest selling points for the Switch after all - however, I can't say I'd recommend playing long sessions using the joy cons. Trust me, the pro controller does a fantastic service to this game.

Ultimately, Doom on the Switch is...pretty much exactly what you would think it is. It's easily the greatest looking handheld first person shooter game on the market, despite all it's cutbacks. That being said, it's also the weakest port of the title to date -- if you are willing to accept the graphical sacrifices and part with the SnapMap feature in favor of a portable Doom experience (or really, the only current first person shooter at all on your Switch), then Doom is going to be a great addition to your Nintendo library.

What excites me the most about this game? It could be revolutionary for the gaming industry. You see, Nintendo has long missed out on third party support from game developers, simply because it has always favored quality games with significant graphical limitations compared to the rest of the competition. Doom, however, could very well be the start of something terrific...or something terrifying.

Panic Button has now proven that with the right amount of time and effort, major AAA game titles can indeed be ported down to weaker gaming hardware. This feat will also be featured with Wolfenstein II, and I can't wait to see the end result. I think this both spurs optimism in developers, but also fear. The big question, is how far will developers go to port games onto hardware like the Nintendo Switch, and just how much quality are they willing to bend in order to achieve these goals? These questions ultimately come down to one factor - the consumer. The success of games like Doom and Wolfenstein could very well catapult the Nintendo Switch into an even greater level of competition...however, poor reception and greater backlash could drive developers away, putting it right back at square one in regards to AAA titles.

No matter how you look at it, Doom is here...on a pop-tart tablet. That's really something neat. Even if it ultimately ends up as one of the few titles to achieve this feat, I'm pretty happy to have been a part of the experience. We'll see just where things go from here. It's an exciting time to be a gamer!