Am I Gettin’ Too Old For This Sh^T: Getting Old With Games

Let’s be clear about one thing: I’m 24 years old. But if you think I’m actually 24 years old, you’re wrong. If I am 24 in Earth years, that means I’m 37 in Gaming years. 37! Let’s face it, gamers follow the same development trajectory tennis players do. We learn we like to game at an early age, and we do it lot, but we aren't particularly good at it. Then we become teens, where technique and reflexes are honed and perfected. Then the 20s come. For some gamers it’s when they hit their prime. But for others, it’s when reality, life, and age catch up with us. And by the time we’re in our early to mid-30s, the best of our years are nothing more than a distant memory.

Recently, I was playing Injustice: Gods Among Us for review, more specifically I was playing some S.T.A.R. Labs missions. Very early on in one of the Superman missions, I got stuck. For those of you wondering, it was mission 6… or maybe it was 7… see, old age. It catches up with you fast. What was I talking about again? Oh, right. So, I played this mission 46 times before I finally beat it. 46 godforsaken, fucking-bloody-puss, hissing-snakes-and-slimy-eels times! After I beat it I sat there, stunned into silence and near paralysis by a sudden feeling of inadequacy. Then I went into the online multiplayer lobbies and tried my hand at a few online matches. 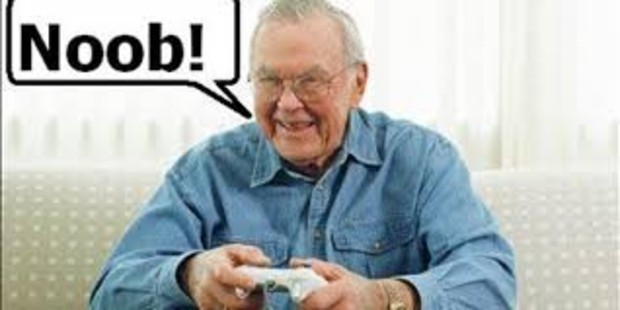 And I thought more, and as I thought more terrible truths made themselves known to me. I realized that the only games I tend to be “good at” anymore are ones with a single-player focus. Racing games, RPGs, Action/Adventure and turned-based strategy games… I can run gangbusters in those types of games. No! No! This can’t be! How is this possible? Am I done?! Is this my life now?! And then the world went dark.

24-year-old me didn't want to believe what 37-year-old me had discovered. He fought it hard and very long for about 3 minutes and 27 seconds. Somewhere between getting up and walking to the fridge to make a sandwich and sitting back down again, I had made my peace. I was done for… I was now the gaming equivalent of Sylvester Stallone. My avatar is probably wondering around Xbox Live as we speak, mumbling incoherently and pooping in his adult diaper. The best of my multiplayer days are behind me, and with all the multiplayer features being worked into traditionally single-player games, well… let’s just say that I sucked at SimCity too. The simple fact of the matter is that I’m going to be a noob at everything I play for the rest of my life.
Login to vote this up!

Recently graduated university with a degree in Chinese. Of course, I'm doing absolutely nothing with that degree and writing about videogames instead. I come from a journalism background and have always written, and I have a passion for games. My interests are tied up in game music, industry issues, and how games continue to exist in the public sphere long after they come out... their legacy, if you will.

I live in the always-exciting San Francisco Bay Area where there is certainly no shortage of freelance competition.

I'm an avid player of RPGs, racers, fighting games, and have been known to enjoy an occasional shooter.