6:38 PM on 03.29.2011 (server time)    0
I have to say, before you play this game you need to do this step by step procedure
1) go rent The Self Destruction of the Ultimate Warrior and view it
2) Eat your Vitamins, say your prayers, stay in school, don't do drugs (all at the same time)
3) Grab an American Flag or 2X4 and Wave it in your neighbors yard, hopefully of a foreign ethnicity or at the Drive thru at McDonalds shouting "USA USA"
4) Get on the edge of your couch/loveseat/folding chair, and do a flying elbow drop onto a angry wild horse, rabid homeless man/mailman/milkman/door to door salesman, or real doll that looks like Missy Elliot in her Garbage Bag outfit

"stole dis from Mark Henrys closet"
5) take all your other wrestling games(except Fire Pro Wrestling and N64 WWF games), shine those puppies up real nice, turn that son bitch sideways, and STICK IT STRAIGHT UP the Trade them ins Candy ASS!
if you don't have time to rent step 1 or run around like an idiot like I do, just watch this clip from it and then play the game.


When I first saw this game, it brought back memories of Hulk Hogan's Rock n' Wrestling cartoon 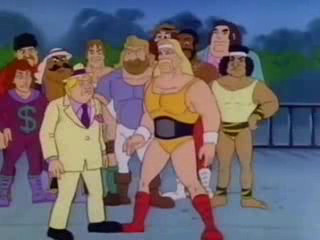 The glorious Saturday Morning adventure where the faces and heels (good guys and bad guys)...hell I never understood what was going on, it just had the Hulkster with a bad voice over

[sidenote: he was voiced by Brad Garrett, everyone loves raymond, but not your Hulk Hogan Voice]
and Roddy Piper sounding nothing like Piper, and some now deceased wrestlers in the cast. But I was a kid and looked up to wrestlers as heros so I watched it with a smile on my face, while playing with my large collection of WWF figures, beating the snot out of the random barn cats and wilderness creatures. Spring Action Ricky Steamboat is still champion of the Tobacco Field. But enough about me, on to the game.

For those who care to read further into the dephs of detail of things about this title continue on.

The best way to describe this game is take NBA Jam + WWF No Mercy ( I so was saying this before Nick Chester), put them in Bed Together, after an hour of cuddling, then some foreplay, then 3 minutes of intercourse with no protection, an awkward pregnancy call, 2 months of waiting to see if its actually yours, then 7 months of labor, you get WWE Allstars.

This game is a great breath of Fresh Air from the current uphill battle that the Smackdown Series has been having over the past few years. I felt as if I were back in the arcade playing WWF Wrestlefest.
I dumped tons of quarters into that game, and I have to say I've spent hours into this and will continue to do so.

There are a variety of matches you can participate in, as well as modes. Now, it's not like going to Sams Club, it's more like shopping at K-Mart. I was a little upset that there isn't a royal rumble (there is an 4 way elimination mode) but I'm still upset you can't climb out yet and eliminate yourself like in Royal Rumble on SNES. The Cage match is rad, as well as no tagging, just Tornado Tag.
Fantasy Warfare is cool, lots of what if you put this guy against this guy situations.
Path of Champions is your typical Ladder to the championship mode like in previous wrestling titles.
But the best part about this is you have 3 different options, Legends Path where you go after the (old)Taker who is the title holder, the WWE Championship (held by Orton), and the Tag Team Championship path - where DX hold it...or did until the MEGA POWERS ran wild on them. 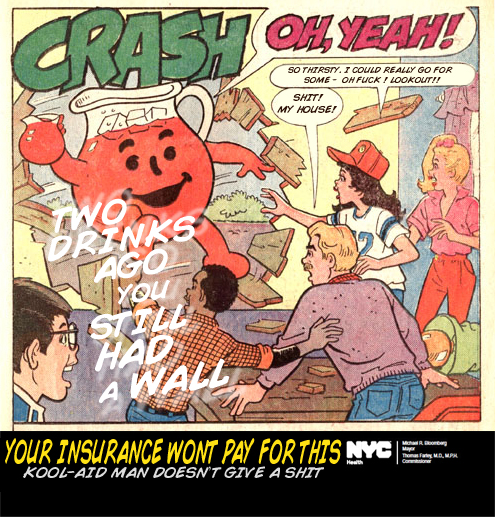 Mechanics: Stays a little true to the way we typically see our wrestling games, with grapples, punch, reversals, etc. However, it uses a que from fighters, giving you Strong Grapple, Quick Grapple Buttons, as well as strikes. This game is fast paced, you gotta go go go! If you try to play it slow, you'll be done quicker than Jake the Snake can snort a line of cocaine. The various classes give a new spin on things since now you have to actually play with your skill set. High Flyers are going to have trouble with Brawlers if they try to face them head on, Technicians are going to have a better reversal and submission ratio, etc. It felt totally different using Slaughter and Mr Perfect after previously flying around with Randy Savage and John Morrison. But this was all in a good way. It's like using Ryu, then switching to Zangief in the original SF2. The controls really are not hard to learn, after a few plays you'll be juggling bitches like Eddie Gordo in Tekken or Charlie Sheen with his porn star girlfriends. It plays like having Sylvester Stallone from Cobra kick down your ex's front door and punch them in the kidney.
I give the Mechanics: 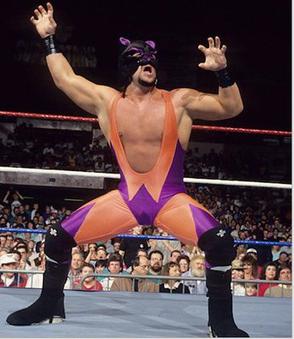 Graphics: Big Over the Top Cartoony, awesome. People were complaining saying, this isn't realistic enough, why are they all looking like they are on steroids? RAWRRR I'm mad. Lets be honest here, who cares. How many games do people buy with cartoon characters or animes(is that what you call that stuff or is that hentai, hell I miss Thundaar the Barbarian.) Think of it this way, be happy that we have a more light hearted approach towards these performers of Sports Entertainment. I do have to say this game could use more Ric Flair blading himself bleeding all over the place like a scene from a B Horror Flick.I felt the flashy animations and streams of light from Owen Hart in heaven give the game a much needed facelift it needed in the final build. You'll notice some imperfections here and there, but it's only because you can only tan so much and use so much baby oil to cover up the fact that you're a 40 year old man in spandex.
I give the Graphics:

Music: All your classic WWF Themes being blasted through the sound machine. The first chord of "Real American" makes you jump out of your chair and tear your shirt in half, only to then get yelled at by your significant other that you just ruined a shirt she bought you. But it's okay, it makes a better headband anyways. But even if you're not into hearing such brilliantly composed tracks like Jake the Snake Roberts, you can just make up your own song and play it over your boom box because the bastards at THQ decided in this game not to let you use your users playlist. Possibly due to the short intros your guy gets, but come on, even 10 seconds of Phil Collins Easy Lover or Rebecca Black Friday is enough to strike fear into my soon to be face down on the mat opposition.

I give the Music:


Multiplayer: Sorry I haven't played online, due to none of my friends currently own it. But We'll go out on a limb and say, connectivity is going to suck.
I give the Multiplayer: 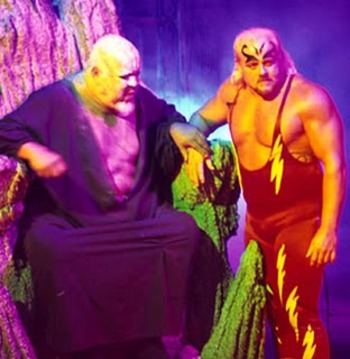 Creation: Seriously, why in the hell are the Hair Selections always terrible. I have been making the same character for the past 8 years, and not once have they included Salt and Pepper textured hair. Just how in the holy hell can I make an accurate Steve Keaton(Michael Gross) from Family Ties if I'm not given the proper materials. But this game actually lets you blend the color to make the hair color I want...without the hair style. However.....you can now adjust the width/length of your mustache and beards. That's right Conrad....Staches so amazing it looks like you have wings growing from your face.

Conrads Stache, not pictured Conrad
Creation is alot smaller than previous WWE creation modes, but hell this game is mainly about wrestling with the Legends. I wish you could edit your whole move set as well, but it's all good I enjoy the preset move sets. Either way I give the creation:

Final Verdict: If you like fast action, over the top, and a feel of old coin up arcade machines, get this. It'll bring you back to your youth with its pure funability - yea I made a word up. Go to your nearest gaming facility, run through the front door, grab the counter and shake it like you have the power of the Warrior in your veins, pick up the attendant, press slam him/her, grab the game, throw money on the counter, and run out. Then and only then can you be the WWE Champion.
This game gets:

note: I actually played this game...all the way through.. Yeah, like holy crap totally did it. And then I took a break to play some stupid Golf Masters Demo, where I got so upset with the controls that I threw the control and hit a man that was blind in the face only to make him unblind and go blind again by the abortion of a boring golf simulation.

"imma totally healed now and can reprogram your VCR"
#Community    #reviews
Login to vote this up!

The most ELECTRIFYING Man in Gaming Entertainment. The Innovator of Random, taking you to the Top of Space Mountain, and crashing down on you for the 1, 2,3. Host of the Rad Show: Get There!

I have worked in the music industry, the radio industry, the engineering industry, and the wrestling industry. I represent Dtoid Western Kentucky Division 404. I like to make video games more entertaining. I also like riding ponies while eating bags of gummy bears. I also assist with various other Programs on the Streams. You can find me weekdays assisting with Mash Tactics or generally throwing randomness.

I plan on entertaining, or at least trying to entertain as much as I can until I forget to post, which happens when you're a busy person who is busy.

So basically I'm gonna try, until I need a day off and forget to post, and then someone is like man that guy was really cool, I think he died or something like the ultimate warrior, cause that's what happens when someone disappears, everyone assumes they're dead...or well at least I do. I swear that I thought Danny Glover died like 3 years ago. But when he sent me a message on twitter after I commented about him dying in a river rafting fruit collecting contest in Utah, I was like, "holy crap, he's not dead."