The Game Boy is really awesome. I mean it! I got one for my birthday a little after launch and was, admittedly, not all that impressed. I mean it was great fun to have handheld games on the go, but even as a kid it was tough to look at that awful green blurry screen and it sort of made me sick to my stomach. By the time I was done with the Gameboy, I had a reasonable library of ten or so different games, but I parted with it easily. Even through the Color Game Boy craze (the big brick ones which had different color cases, not the actual Game Boy Color) my interest for the brick didn't come back. I was more interested in bigger and better stuff like the Game Gear.

But the Game Gear didn't stand the test of time. It was too unwieldy, too much of a battery hog. It wasn't remotely portable. Nintendo Power started showing off a new game called Pokemon in little spurts later on with a page here and there featuring the quirky new RPG. I was intrigued, but not enamored.

And then it came.

Watching it recently with the excuse that "Uh, my daughter turned it on on Netflix" I realize it wasn't a bad show. Not great, but not terrible. But as a kid, I was obsessed. I'd tape every episode that aired and watch them over and over again. It was a pretty miserable time in my life where my parents were going through a divorce and we were transitioning into a move to another province. So the idea of having a cute yellow rat friend who lived inside of a ball was a fantasy I engaged actively in.

When Pokemon finally came out, I knew I had to play it. So I asked for a Game Boy Pocket, and out of divorce guilt, had an extremely lavish and rewarding (and expensive) Christmas that year. I got my Game Boy Pocket, Xtreme Green edition which was later stolen sadly, and Pokemon Blue, as well as a couple of N64 and Playstation games. 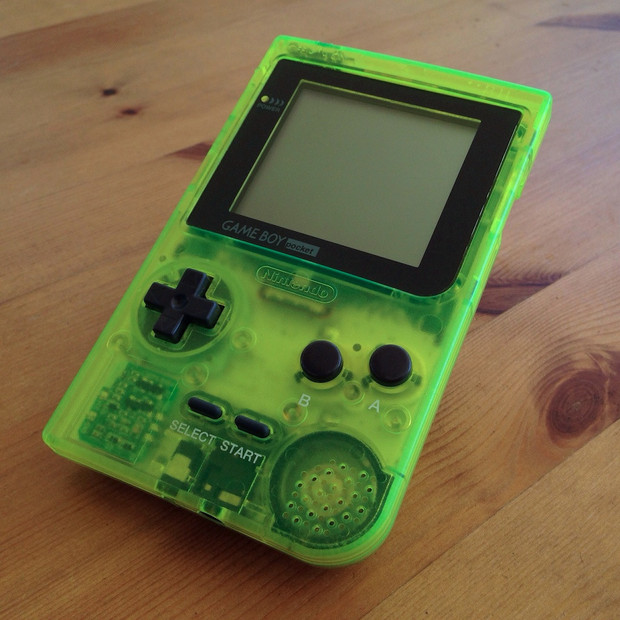 I got major into Pokemon, and while the screen on the Pocket had improved, it was still hard to see. I braved many a game on it until the GBA came out and had the same exact problem, forcing me to attach an unwieldy contraption of lights to the thing just to decipher what was going on.

When the GBA SP came out with it's front lit screen, I couldn't have been happier. And plugging my old library of games into it and playing them for the first time on a screen that didn't make my eyes bloodshot was amazing. It was around then that I started to develop a real appreciation for the Game Boy, but it wouldn't kick off until a couple of years ago when I started collecting for the NES.

The NES is perfect. I mean it has amazing technical shortcomings. A big chunk of the library is made of awful shit. But it was the first time home console video games felt representative of something other than raw mechanics and rudimentary shapes and beeps and bloops. The NES made games feel like worlds, with varied atmospheres. Games started to resonate with me on an emotional level. There were games I was afraid to play, games that made me happy, games that made me sad. If I were on a desert island and had to choose one system to play for the rest of my life, it would be the NES. 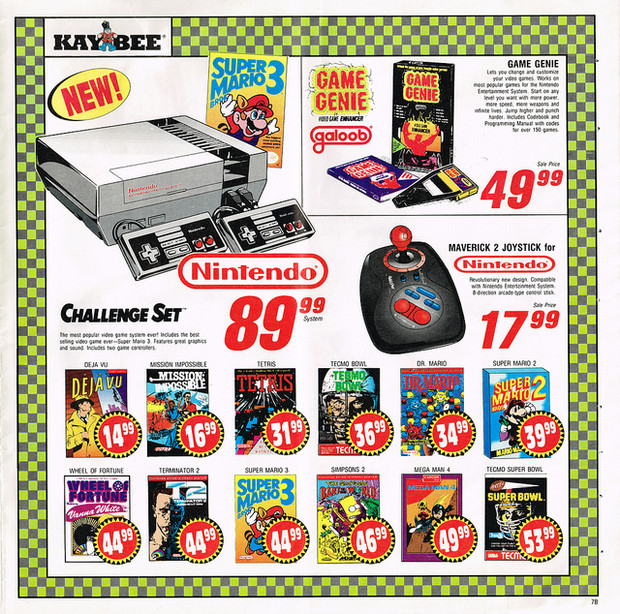 There are some games that are easily up to the quality level of the NES on the Game Boy, some ports that are such a close representation of their console brethren that they might as well be the same game. Take Duck Tales, for example. One of the best games on the NES is also one of the best on the Game Boy, amazing soundtrack, graphics and gameplay intact despite the limitations of the monochrome display. Links Awakening is more akin to a Super Nintendo game, and by many accounts is the best top down Zelda in existence. Donkey Kong is a masterpiece that takes a classic and turns it on its head, adding depth and a puzzle like complexity as well as dozens of original levels. And the Contra and Castlevania games even have a presence on the system, and though dumbed down from their console counterparts, and pretty solid games in their own right.

The Game Boy is consistently overlooked by collectors. When trying to turn over my collection, I was amazed at how easy it was to get rid of NES, while everything else was like pulling teeth to move, the Game Boy included. Most people collect for it as a passing fancy if anything, or to complete some wider, global collection of Nintendo products. But very few collect it as a system they actually want to play, and I think there are a couple of reasons why.

For one thing, there is definitely a preconception about the Game Boy being an inferior quality system with sub standard ports of better games. I don't think this is entirely true. The Game Boy has a lot of "watered down" ports, but in my opinion they are not always made this way due to the limitations of the hardware, but more due to the handheld nature of the system. In playing through Bonk's Adventure the other day, I noticed the slimmer feel from console to handheld, but also saw a lot of verticality and complexity in the later levels which proved that it probably would have been possible to create a closter to 1:1 representation of the game, but that it just felt better on a handheld to cut out the fat and leave the meat of the experience intact. This is the case with a lot of Game Boy games where it just isn't practical to have a game spanning multiple hours of play on a handheld you are meant to pick up and play for an hour at a time.

The Game Boy is a bite sized brownie; meant to give you a taste of saturated goodness before you put it down. The games, especially today, are comparatively cheap to other consoles. And because it isn't some ridiculous constant bidding war between savage scalpers and rabid collectors like the NES and SNES generations, it's a lot easier to build a substantial, fun collection of games. 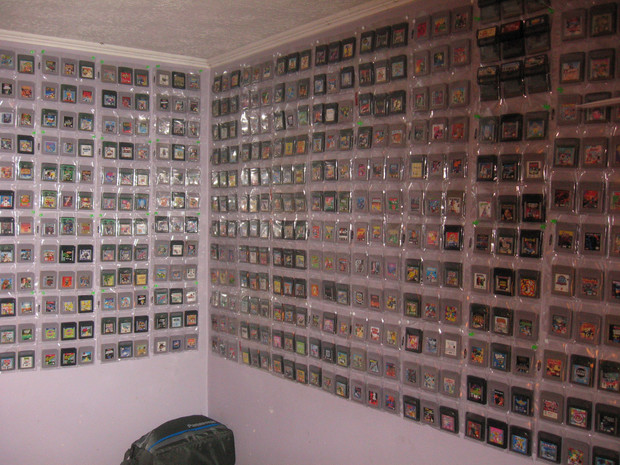 The other reason I think Game Boy has a bit of a bad rap is because it's unpleasant to look at. Purists will tell you it's best to play on the "brick", the original release of the system due to better sound quality. But everything else about that experience is worse. The Super Game Boy has a few problems in terms of accuracy, though it is pretty faithful, but the biggest drawback there is that you are stuck playing on a television which defeats the point of collecting for a portable system. Also you have the added drawback of no access to Game Boy Color titles, which are some of the best in the library, and are certainly home to some of the best ports.

The best way to play is to get yourself a Game Boy SP. Not the original front lit model, but the later backlit one. There are some sellers on Ebay who specialize in refurbishing and reselling SP systems with backlights. They run a pretty penny at about 75 bucks, but if you are planning to play Game Boy games, this is the best solution around.

You may not get the full NES experience, but you get a good taste for a fraction of the price. Plus, you can fit an entire collection in a shoebox, and who doesn't like that? 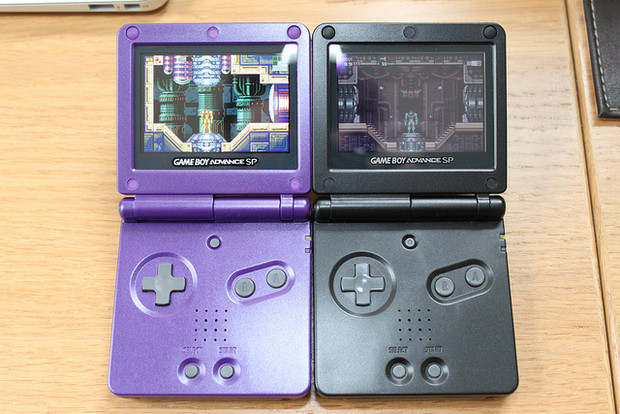 The Game Boy is my favorite console these days due to time constraints, space constraints, and a tight budget. And it is the one collection I have held on to despite liquidating nearly everything else. A few of my personal favorite Game Boy Games include Parodius Da!, which is even more faithful a port than the NES version in terms of mechanics, Shanghai, a simple but fun solitaire Mahjong game with a great little soundtrack, Tetris, because Tetris, and Crayon Shin Chan 4, a painfully short but fantastic little platformer with suits ala Mario 3 that Shin Chan can wear to obtain different powers.

Just wanted to take the time to gush about one of the best, most overlooked video game systems out there while sharing the reasons why you should collect for it.

Now don't go and collect for it. Because it might jack up the price of the games if you do, and I won't be able to afford to anymore.