The Games That Broke Me

There is a corner in all of our minds where the most unpleasant memories are preserved, waiting to rear their ugly heads at seemingly random times to make us cringe. For example, I can never forget the embarrassment I felt when, in a poorly thought out attempt to deflect the blame for my misbehaviour in school, I told my year 8 form tutor that it was my father’s fault. My teacher asked why; was my father absent? Run off with a younger woman? In the army? No, I replied, he just worked long hours (to advance his career and support his family). I’ll never forget the look on Mr Martin’s confused face as he awkwardly attempted to humour the oblivious spoiled brat sitting before him. Shudder. Shame. Not my finest hour. Why is it that these memories stick with us and torment us, to be recalled involuntarily in 4K HD levels of detail, whilst our most cherished memories can be hazy, almost polygonal, the detail cruelly eroded by the flow of time?

In the gaming portion of my mind there also exists a little niggling pile of shame– the games that broke me. A little collection of failures that, for one reason or another, my dogged gamer’s determination to “git gud” could not conquer. This article is about those little blemishes. Those affronts to my pride, long suppressed, shall be brought out into the light; a cleansing, if you will. So, without further ado… 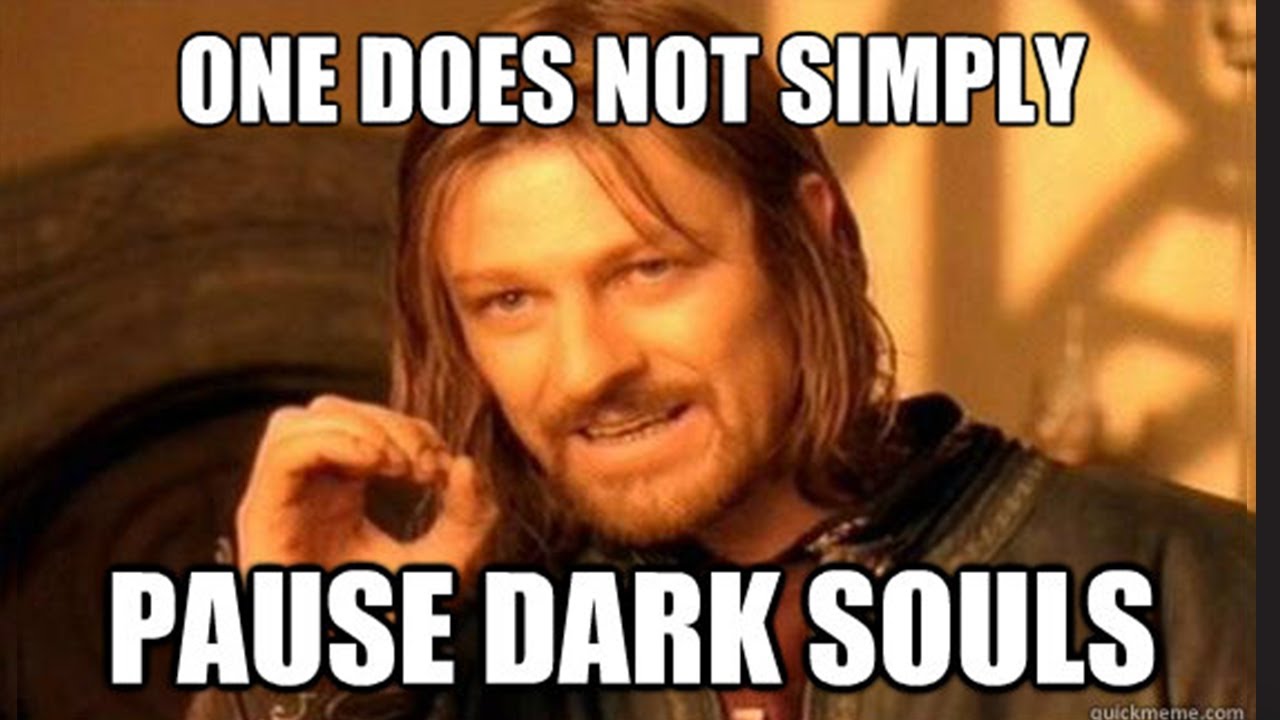 I, like many other masochistic gamers, love the Soulsborne series. I’ve beaten Demon’s Souls, Dark Souls 2, Dark Souls 3 (twice) and Bloodborne (twice). It is to my shame that I admit that I have never beaten the original Dark Souls. The reason? The Gaping Dragon! Placed cruelly smack bang in the middle of the game (just too far down the line to consider restarting and respeccing with this nightmare in mind, as I did with Vicar Amelia in Bloodborne, but more on that below), this gigantic, toothy, acid-spitting bastard killed me so many times that it borders on comedy. It would be funny too, if I’d ever gotten past it. As it happens, I never did. Concerned for my blood pressure and the effect on my hairline I decided that, after one rage-quit too many, it simply wasn’t worth it. My Dark Souls adventure ended in an expletive-laden tirade that would make a sailor blush. I am still considering my options for legal action against From Software to recover the cost of the hair transplant that I will need in no small part due to this fucking game.

Note: I was going to put a picture of the naked disk still residing on my desk here but the site doesn't seem to like iPhone pictures...

Unpopular opinion: Sekiro is a game I never had even a shred of fun with. I love the other From Software games because the RPG elements allow for creative builds to game the system somewhat and make life just that little bit easier. For example, a first playthrough of Bloodborne is made considerably easier by focussing on the arcane stat. After multiple defeats by Vicar Amelia, I restarted, respecced and returned with a flamethrower to send that bitch straight to hell. Arcane pays off again and again once you get access to Ludwig’s greatsword and the more powerful late game spells, which can do significant damage at a safe distance from many of the game’s tougher bosses. Sekiro dispenses with the notion of player choice and forces the player to play it one way: From’s way. Unfortunately, that way is not fun. Sweating bullets over every mini-boss, heart pounding, knowing that one mistake means instant death, the game is punishing beyond belief. Even a mini boss usually has two to three health bars that must be taken down, a task made extremely difficult by the fact that the katana I am swinging might as well be a tea-towel for all the damage it does. Conversely, being so much as grazed by whatever WMD the enemy is wielding will necessitate frantic emergency healing as a best-case outcome. I’ve just beaten Gyudo in a tooth-and-nail battle for the ages and now I’ve got this pain in the ass flaming boar thing to deal with IMMEDIATELY after? I’m exhausted and need a lie down… From Software have a lot to answer for. The final straw? Genichiro Asina. Couldn’t even hit him. He just fucked me up. Over and over and over again. I ripped the game from the disk tray in disgust. It never even made its way back into its case.

Every Call of Duty Game Ever 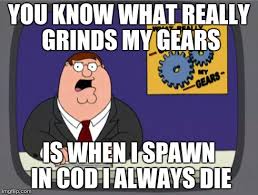 Good God the Call of Duty community are committed, I’ll give them that. The sheer dedication it must take to master this game could, I feel, be better utilised somewhere else. World peace? The climate crisis? Ending famine? I’m sure that if the CoD community channelled all those man-hours into solving any of these problems, something truly miraculous could be accomplished. I’ve put days of my life into the last two games and never managed to top anything more than a barely respectable 0.86 KDR, at which point the game’s skill-based matching system takes me out of games with 12 year-olds playing “Cotton-Eye Joe” on repeat into their microphone in a (successful) attempt to piss me off so badly that I’ll make poor decisions. Once I hit that coveted 0.86 mark the game instead sees fit to drop me into games with what must be hardened special-ops soldiers trying to keep their skills sharp between missions. I become cannon fodder for unseen assassins. Spawn die spawn die spawn die (why is the game still spawning me here?!) I’ll stay still then. I can’t beat these guys on the draw. Then the abuse comes. “Camping” is anathema to the CoD purist, a red rag to a bull. They pour in in twos and threes, smoking me out of my pathetic little bolt hole. Flashbang, wallop, repeat. You win CoD. Give me back my 200GB of space and I’ll fill it with something that doesn’t make me feel woefully inadequate. 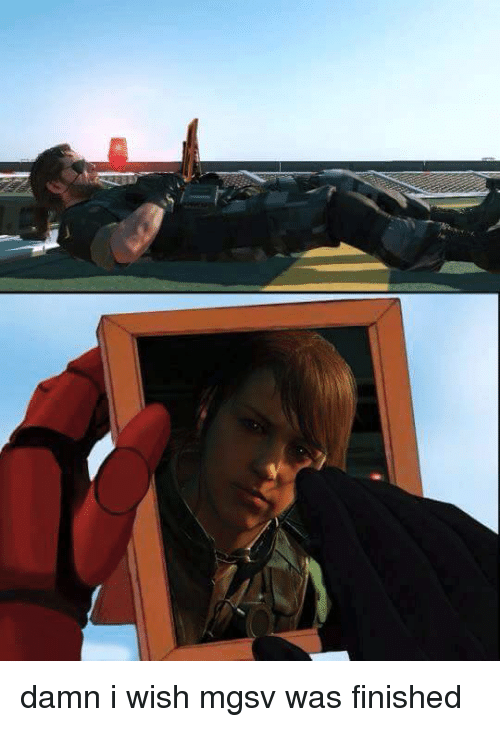 MGSV: The Phantom Pain is a fantastic game, up to and including the end of “Part 1”, mission 30. When the game reveals that this is merely “Part 1” of the adventure, excitement quickly gives way to dismay as the requirements to see the ending are made clear: replay the same missions you’ve already sweated over for an S-rank,  made harder now in extremely uninspiring ways. “Subsistence” re-hashes of earlier missions are both boring and annoying. On my first playthrough I threw in the towel at this juncture, infuriated by the laziness of it all. My second playthrough, just a few weeks ago, was considerably more successful. I saw the “true” ending, which was satisfying to a point, but there were still three more missions left… Confused, I asked my cousin if there was any point or pay-off to completing these (I knew I’d seen the ending, which had been spoiled for me many moons ago). The answer, an emphatic “no”, prompted me to put the game down a second time. I’ll never finish those last three missions. 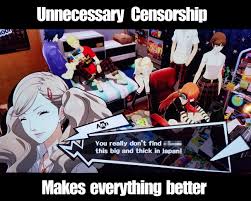 Persona 5 is one of my favourite JRPG experiences of recent years. Immensely complex (thematically and systemically) and dripping with anime charm, I lost myself in its world for 50 plus hours. Unfortunately, I fell down at the final hurdle, never to get back up again. The final dungeon consists of a gruelling gauntlet of bosses, each more dangerous than the last. I never made it through and wished I had made the obviously sinister, self-serving deal with the nefarious God of Control. Probably my most shameful gaming failure, I did the unthinkable: I Googled the ending scenes and watched them on Youtube. Probably for the best as I’d tried to date everyone (I don’t know why I did that; Anne was the clear choice) and was marching toward a painful Valentine’s Day reckoning. Forgive me Father, for I have sinned…

So, there we have it – the games that broke me laid bare. It feels good to get these off my chest. Which games make up your little pile of shame? Unburden yourself in the comments!

- Thank God for Jim Sterling I'm off to return some videotapes...

Tifa is my waifu

My imaginary French bulldog's name is Señor Blueberson, Master of the Sea

What's with all the Neymar hate?

If you like my stuff buy me back in Warzone

In '87, Huey released this, Fore, their most accomplished album. I think their undisputed masterpiece is "Hip to be Square", a song so catchy, most people probably don't listen to the lyrics. But they should, because it's not just about the pleasures of conformity, and the importance of trends, it's also a personal statement about the band itself.