Some Written Word on Game Design: The Craft of Crafting

This image terrifies me. 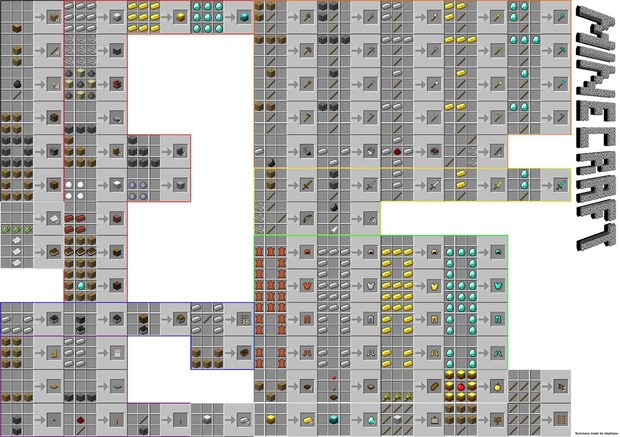 Ah, crafting: the process of taking some bits and pieces, chucking them on a workbench, and turning them into one bigger bit. Note that this is not an analysis of building mechanics – though I can direct you to some great reading on that. This is about workbench crafting, and how that slots into the game as a whole. Crafting is an important part of most RPGs and MMOs, and in the latter crafting is often the powerhouse of the in-game economy. For many MMOs like WoW and SWTOR, that’s largely where the importance of crafting ends (Though WoW incorporates it into a character’s role). For the most part, crafting keeps the economy trundling along so that new players can buy gear easily or so that the Dragonborn can buy more soul gems. It is wasted potential.

Sometimes crafting takes on a beautiful simplicity – or becomes mind-blowingly complex, spawning an economy that could rival a nation’s for intricacy. Let’s take a look at examples of both, they are both Star Wars games so if that’s not your thing… *shrugs*. 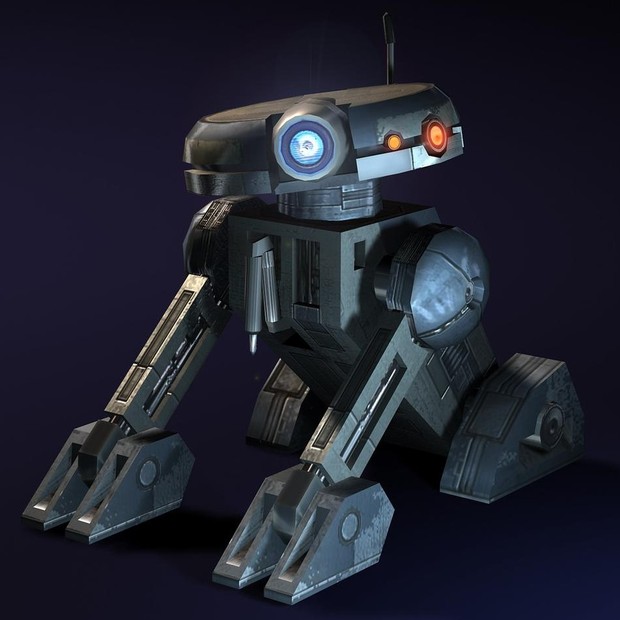 When making the crafting system for KotOR 2 Obsidian appears to have sat down and gone ‘what bits does a lightsaber have?’ - answered the question, and then turned it into their crafting system. Everything is built from components – bits and bobs that can be turned into other stuff. 160 components might let me craft a Pontite Lens for my lightsaber or a MK-IV Targeting Scope for HK’s rifle. Often crafting systems struggle with where its base unit of stuff comes from. Most games, like Skyrim, ditch it for a sensible but complicated arrangement of materials. You can’t break things back down to their constituent parts so once an iron ingot becomes a sword it’s a sword for good. KotOR 2 opts for simplicity. Once I’ve got my lens I can take it apart again, and get most of the components back. There is something to be said for just how simple that is – and it is a little surprising how often that aspect of crafting is overlooked.

There is also something else KotOR 2 gets right, and it is the main reason I’m using it as an example: it is one of very few games where you can get others to craft things for you. If my character doesn’t have the skills, I can always get the plucky little trash compactor T3-M4 to take a look at it. In most other games that feature companions that appears to have never even occurred to the designers. I’ll bet that after being a vampire for a few centuries, Serana probably knows a thing or two about enchanting – but I cannot utilise that. Nor can I pay someone to improve my weapons, even though that would be perfectly logical. KotOR 2 does not do that either, which is a shame. But I can understand why that doesn’t happen, it makes a lot of sense from a design perspective, and most games do a good enough job of immersion that I didn’t even notice how strange that omission was until I started writing this. 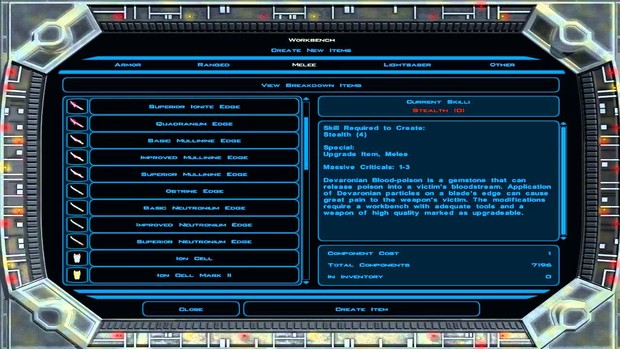 KotOR 2 does crafting simply, and it comes off well. The system is easy to understand, has decent depth to it, and most importantly it allows a sense of progress as you are able to craft more advanced parts using your companions; crafting was used as a means to make companions – even the useless ones – valuable. It’s such a small thing, but one that makes a difference and is often not utilised, for some unfathomable reason.

Oh lordy lord. SWG is a game that is both simultaneously adored and hated. Mostly because Sony Entertainment ruined it by taking it from something original to a WoW clone. And I mean ruined. Wrecked. Annihilated. I started playing shortly before the change, and I saw progression systems with promise – well suited to the MMO environment. Then Sony squirted out a generic stinking shit onto it (or so says community consensus) and buggered the whole thing up so much that they lost a boatload of subscribers and essentially had to go into maintenance mode within a year. Thank the Force they didn’t mess too much with crafting. It was glorious right up until closure. I still remember the Mos Eisley flypast in the game’s final hours… my memories of that game are fond indeed. 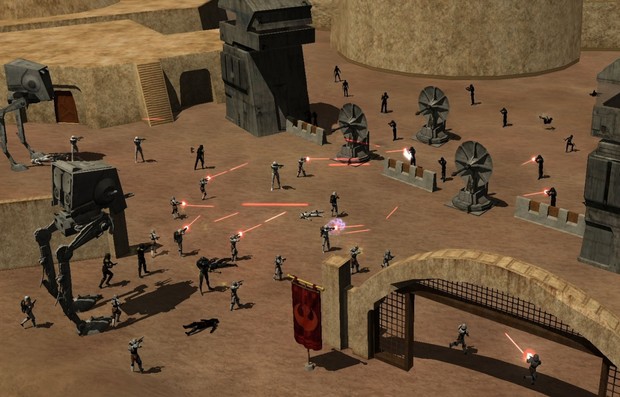 Anyway, I’ll nostalgia another day - back to crafting. Every ship was made of its component parts. Its guns, its engines, its shields, its missiles, its hull plating, even its chassis. All of it taken together with a set of blueprints made your ship. Every corporate entity in the galaxy made ship parts of varying quality. I recall spending 3 hours trying to find a very specific Sienar Fleet Systems engine. It had the stats of a 1 million credit engine, but cost a measly 120k because it could only be fitted into one specific ship - which just so happened to be mine. Crafting exists on a scale of simple to downright mind blowing. Most games sit in the middle, but SWG set the upper limit. Some parts could only be fitted into certain ships, like my engine. Some crystals only worked with certain lightsaber designs. Repulsorlift engines could only support a certain mass, so building big speeders was tricky as you had to hunt down a repulsorlift powerful enough. It was meticulous down to the last. 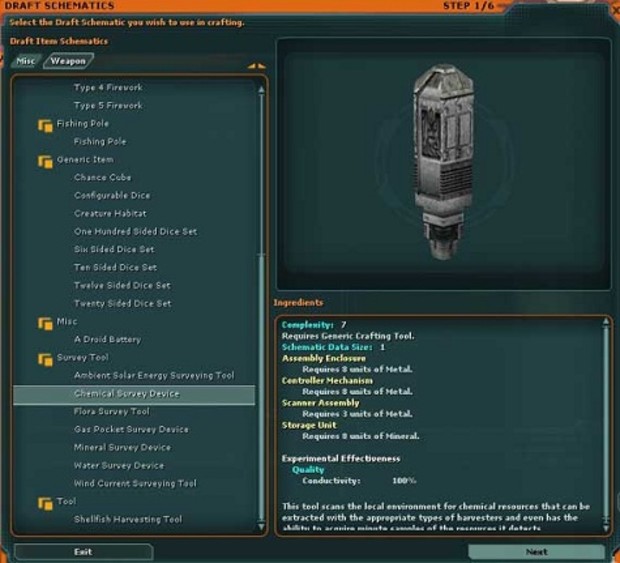 And it got even more complicated at the next level. To craft these components required raw resources. Some of which were rare indeed, specific to certain areas of certain planets. I cannot remember the metal I used to mine, but it fetched a good price. It was really rather ludicrous that I was one of about 20 people on the entire server who could produce meaningful quantities of that metal. And it was in high demand – required for making high-grade multimillion credit parts. There were dozens of metals, any combination of which could be required per part. Any combination of parts could be combined to make thousands of bigger parts. If there was a blueprint of it, it could be made – and there were thousands of blueprints. I would not be surprised if there were billions of possibilities with SWG’s crafting system. When taken in its entirety, there is something rather magnificent in its scale; in its intricacy. It rivaled EVE Online for spreadsheets, though. 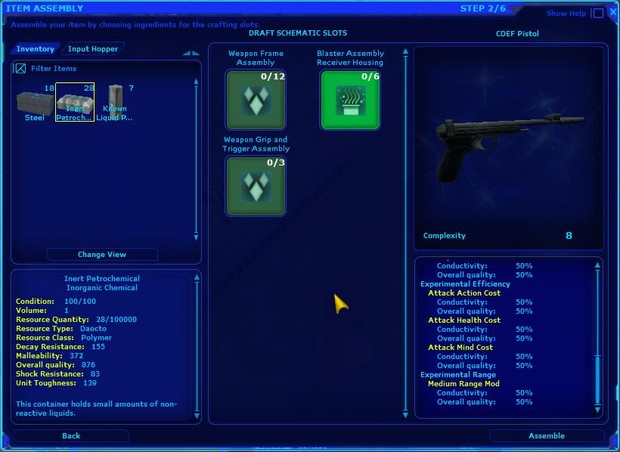 As an aside, I’m turning this sort of thing into a series called ‘Some Written Word on Game Design’ (more catchy title pending) – so if there’s anything in particular you’d like me to write about, feel free to ask.