Ok, so, this didn’t “just” happen; I played it about 5/6 months ago. But I really want to talk about it and it hasn’t been that long, so let’s get to it!

I found out about this game a couple of years ago, mainly because of it featuring Kazuma Kaneko’s art (of SMT fame) but didn’t pay much attention at the time. It was recently, with it becoming available on the EU PSN Store that I rediscovered it and, during my usual pre-buying research, noticed it was actually developed by Atlus – and not just published by them, as I originally thought. “A 3rd person action game by Atlus? Gotta try that”, I thought. Well, it seems there was something else to it.

You see, Maken X was released for the Dreamcast back in 1999 as a 1st-person action game. Demon Sword, however, was a remake of sorts, changing the perspective to the 3rd person, among other things. This version was released for the PS2 in Japan 2001, and 2003 in Europe. Unlike the first one, this didn’t come out in America. As such, a small contextualization may be in order. According to Wikipedia “The game's story is based on Maken X, a genetic creation that can cure mental illnesses. This genetic device has its own mind, and can take control of a person’s body through their weapons.” Yup, seems accurate. 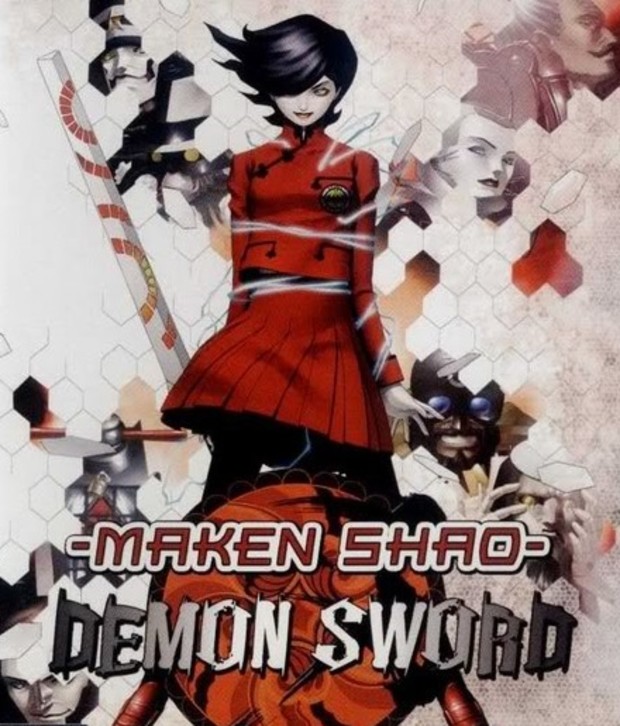 Ok, my first expectation when going into this game was along the lines of “Character Action Game”. Nope, not the case. Since it’s basically a first-person game played in third person, it is indeed a bit as clunky as it sounds – both visually and mechanically. I mean, they had to make a bunch of animations for the different characters you play as (will get back to this later) and that clearly shows. Also, the combat is very timing-based: you don’t usually have a ton of enemies surrounding you, with this happening only when that quantity/variety is exactly the thing you need to juggle. This is due to the game being originally played in the first person and, from watching videos of Maken X, it does seem that the Dreamcast version may be smoother in places. It also mixes in some platforming elements (there’re not that many, thankfully).

But you know what? After a while I was really digging it! The soundtrack is great – which, being Atlus, it would be merely “good” at worst – and I generally had fun replaying stages to level up each character’s “Image”, with a pretty nice variety both in terms of characters and places. And if the “an Atlus game being released in Europe and not in NA” irony wasn’t enough, most of the game is spent travelling the world, which includes European countries. And then, one of the places you travel to and is actually a relevant turning point in the story is Lisbon, right here in Portugal. And it’s not too shabby a representation, either. Accounting for obvious limitations, I feel that each place gives a pretty cool vibe, with some of them being very reminiscent of their real life counterpart.

On to the story. Two things I was unaware before playing this game: (1) you actually play with the girl featured on the cover during the first level and (2) there are multiple endings based on your choices. So, as I shamelessly copied from Wikipedia’s description in this game you play as Maken, a being artificially created to enter a person’s Image (a.k.a. Soul) and capable of “rewriting” it. Due to a variety of circumstances, which I’ll try not to spoil, you are tasked with travelling the world in order to face a being known as Mr. Meteor – Maken’s predecessor, sort of. Along the way you meet two opposing factions and this is one of the elements that contribute to what ending you get. Upon meeting said characters, you’re given an option of answering their questions and requests with Yes or No, which then may lead to you fighting them, or not.

The way it is set up may make it seem like you don’t really have a “choice” per se, because most of the time you end up entering that person’s image, but you do in terms of how you get access to other stages, accessible by certain characters, which in turn house more characters. They each play differently, mainly in terms of range and timing (which, once again, are probably the main aspects of the gameplay), with the funniest situation coming from you “possessing” a pilot, which then becomes a playable character; and who sucks for the first half of his level up scheme, and then just owns everyone.

Also, quick side note on the enemies. The bosses have very cool and distinct designs, but some of the regular enemies were capable of making me go “What in the fuckest of fucks am I looking at?” – namely those damn iron maidens in Athens. And that usually doesn’t happen. 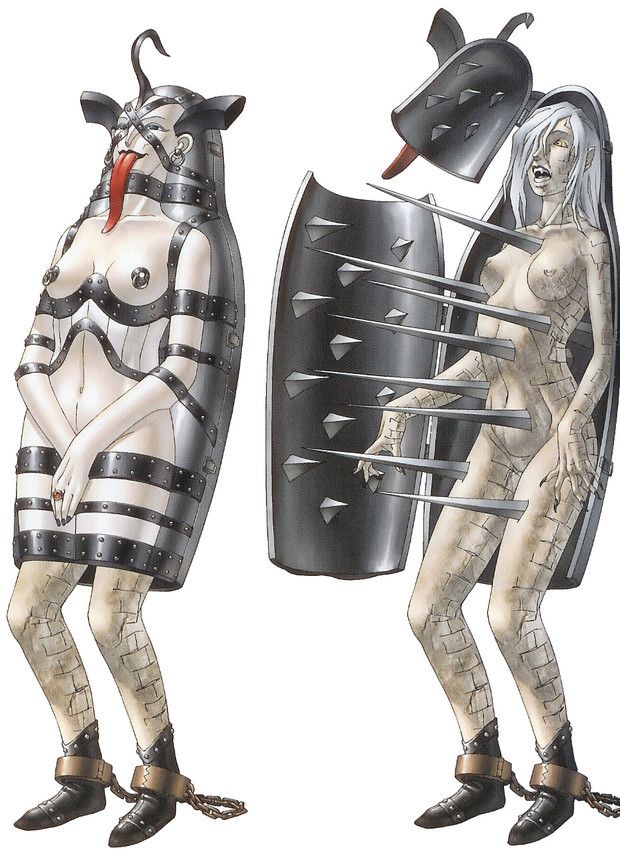 So, the other thing that contributes to the different endings are moments between the major fights in which you, as Maken, talk to girl I mentioned before, Kei. She may ask you some things, or state other things, which you then answer with, once again, Yes or No. This has to do with Kei’s consciousness being merged with Maken’s, which is also a major plot point.

Let me tell you, I was immensely intrigued by the story. Apart from the characters’ dialogue, there’s a database which houses more info on the both the characters and the events surrounding these events. It seemed primed to be a story I would be totally on board with. And I say “seemed” because this game has one major, *major* issue hanging over it: its localization. I wrote about the value of quality localization before, and this was one of the games I also wanted to include back then, but it ultimately got cut. Well, it’ll be getting what’s coming to it now!

When Maken X came out, people crapped all over its English localization, both in terms of writing and dialogue. So, when Maken Shao came out one of things it boasted was a “new and improved translation”, with the voice overs only being in Japanese. Well, I don’t know what they did with the first version but they sure shit the bed with this one. At first you don’t really notice it that much, it seeming just awkwardly written stuff, but then I got to a point where, with my limited knowledge of Japanese, I knew that what the character was saying had nothing to do with the text.

Picture this: you’re talking to Kei, and then you get to a point where she asks you something. You can clearly tell she wants to avenge a specific family member, and the text boxes that encompass that entire rant it reads “..." and "Eh…?”. And then the choice: Yes or No? 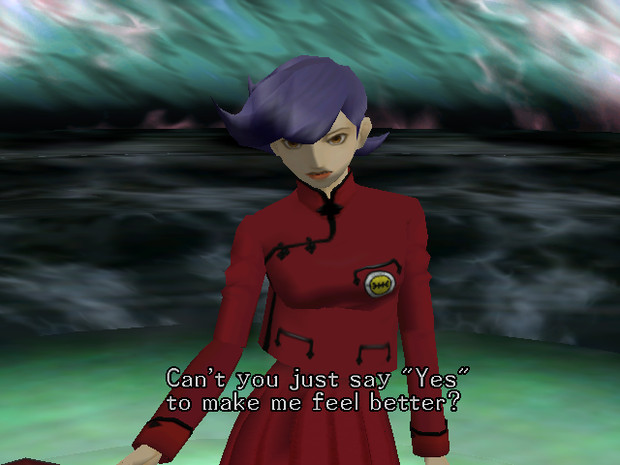 I'm not so much a "meh" guy myself, so I went with yes. But seriously, this is what happens. Some other stuff like the database being written in broken English and with misinterpreted information also doesn’t help. And believe me, it’s a damn shame. I was getting so much into it, into the characters, their backstories and relations to each other, and then it’s just awful. Put a choice-driven mechanic in there, and the result is…disappointing to say the least.

I played this just before Lux-Pain (another game with atrocious localization) which is interesting as, like with that one, if not for the localization this had the potential to be one of my favorite games. I enjoyed the gameplay, the scenarios and settings were varied and considerably interesting, the designs were superb – especially in Kaneko’s style – and I’m sure everything related with the story is so much better than what I got to see. But that’s how it is.

Also, there’s a 3-volume manga written and drawn by Q Hayashida, whose best known series Dorohedoro I have yet to read but intend to, someday. But I did read this one and it was much more grim and violent than the actual game, with some plot points interpreted and executed differently. It had some neat ideas but, overall, I was not a fan.

What about you, have you ever heard of either of these games? Did you get to play them? Please share your thoughts, your complaints, why roofs are the best part of a building and whatever else you feel like. Have a [insert time of day you're in when reading this] and enjoy life. Yours, preferably.