So that just happened: Jake Hunter - Memories of the Past

You know what I love? Detective stories and Noir settings. You know what else? Impeccably written visual novels. And what gets this all together in an outstanding package? Hotel Dusk.

But it’s not about that pearl of a game that I’ll be talking about today. Today’s musings are going to be about another Nintendo DS game, which I believe may have flied right under a lot of people’s radars – mine included until a couple of months back – and it is called Jake Hunter Detective Story: Memories of the Past . 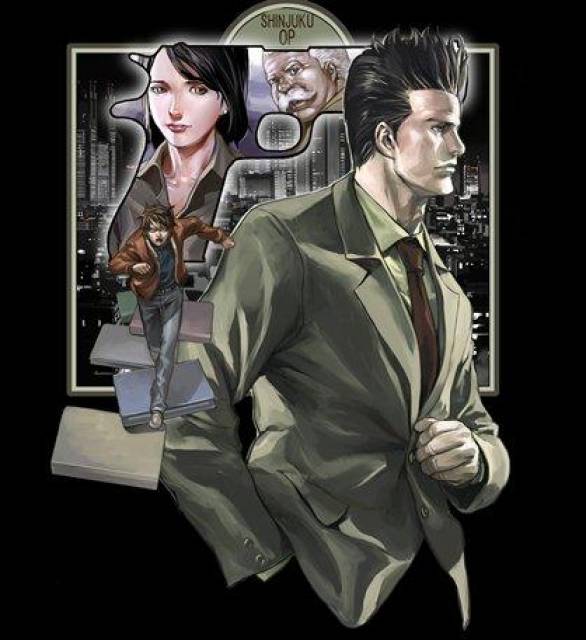 I’ve recently been much more prone to indulging in my videogame-related “morbid curiosity”; which relates to those games that I don’t expect that much from, that I wouldn’t generally give the time of day because there’s so much to play and so little time/money. It’s a gamble, considering I’m pretty sure I’ll either really enjoy them, or wish feel like I just threw my money away. Some turned out well, like Senran Kagura and Tokyo Beatdown, while others…not so much *cough*Yaiba*cough*.

JH: Memories of the Past is one such game, that popped into my consciousness during one of my expeditions through online sales. The cover art really interested me and I went online to find out more. As it so happens this series has existed for quite some time in Japan, with this being the only entry localized for the west. Twice even! You see, Aksys originally localized the game as Jake Hunter: Detective Chronicles , with only three of the 6 cases and with a big chunk of the extra content removed. Then, a year later, they released it again but now much closer to the original version, including pretty much all of the content and a new translation to boot. And that is the version I played, since Europe never got any of this and I had to import it. Oh well. 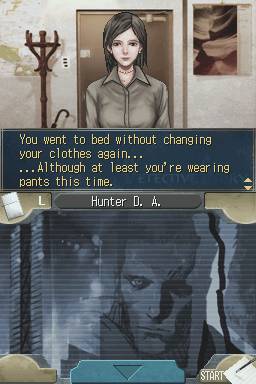 And that is actually a great place to start – the localization. It’s been a hot topic to discuss these last few days, especially concerning some titles on Nintendo consoles. As those who have played the Ace Attorney series are aware of, some drastic decisions can be made during this process, in an effort to keep the game’s essence while making it more…approachable.

In that sense, our titular character and his lovely assistant live in a place called Aspicio, somewhere on the United States that looks pretty similar to the Kabuki-cho district in Shinjuku. Funny thing that I played Yakuza 4 right before this and then something along the lines of “that unmistakable arc that marks the entrance to the district” pops up. Interesting how Kamuro-cho also has a distinctive entrance exactly just like this one!

But like with Phoenix Wright’s adventures I won’t hold that against it, since it is all pretty well done, despite a couple of missing letters in the text here and there (which is acceptable) and they seem to manage to keep the core of it. Despite the Don of what is supposed to be an Italian mafia family living in a traditional Japanese house and there being bar hostesses everywhere, that is. 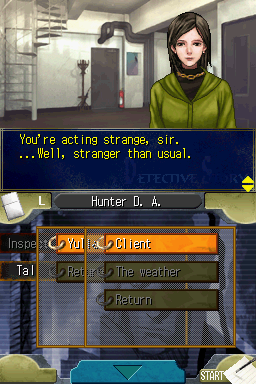 Moving on, the game is divided into 6 cases, with the last one sharing its name with the game’s title. The other five are essentially remakes of the first games released in the series. In that sense, and seeing as every story is unlocked from the start, I thought I should obviously start with the first one (despite the game highlighting the Memories of the Past chapter when you’re in the case selection menu). As it turns out, while you play through the last chapter – which is about revisiting some of Jake’s older cases – you get the opportunity to play through them right there. So there was actually a reason for that one to be highlighted! Oh well.

So, for me (and many others, I assume) the strength of the writing is crucial in games like this. Narrative-wise I must say that Jake’s cases didn’t really catch me by surprise nor had some incredible twist that really shook things up – for most of them I figured out pretty early who murdered who, how the characters related to each other, and so on. Even so, this doesn’t mean the game didn’t grab me. The cases may have been typical and predictable, more so due to my interest in the genre, and the characters may at first glance seem stereotypical, but everything seems to be done very passionately. Like the development team just want to take a detective archetype and tell these stories that they enjoy. Which is something I totally don’t fault them for because I had a lot of fun meeting Jake Hunter, his assistant Yulia Marks, Inspector Scott Kingsley and following their adventures.

The sixth chapter does something that also puts things in an interesting perspective. For most of it you play with some good-for-nothing dude who really doesn’t know what to do with his life. During the course of this chapter he gets to read Jake’s files and comes to really admire the guy. I’m pretty sure the intention was for his perspective to reflect the player's, which I kind of crapped on since I played this one last; even so, I find it pretty neat how controlling such a screw-up got me to like Jake even more. Well done game! 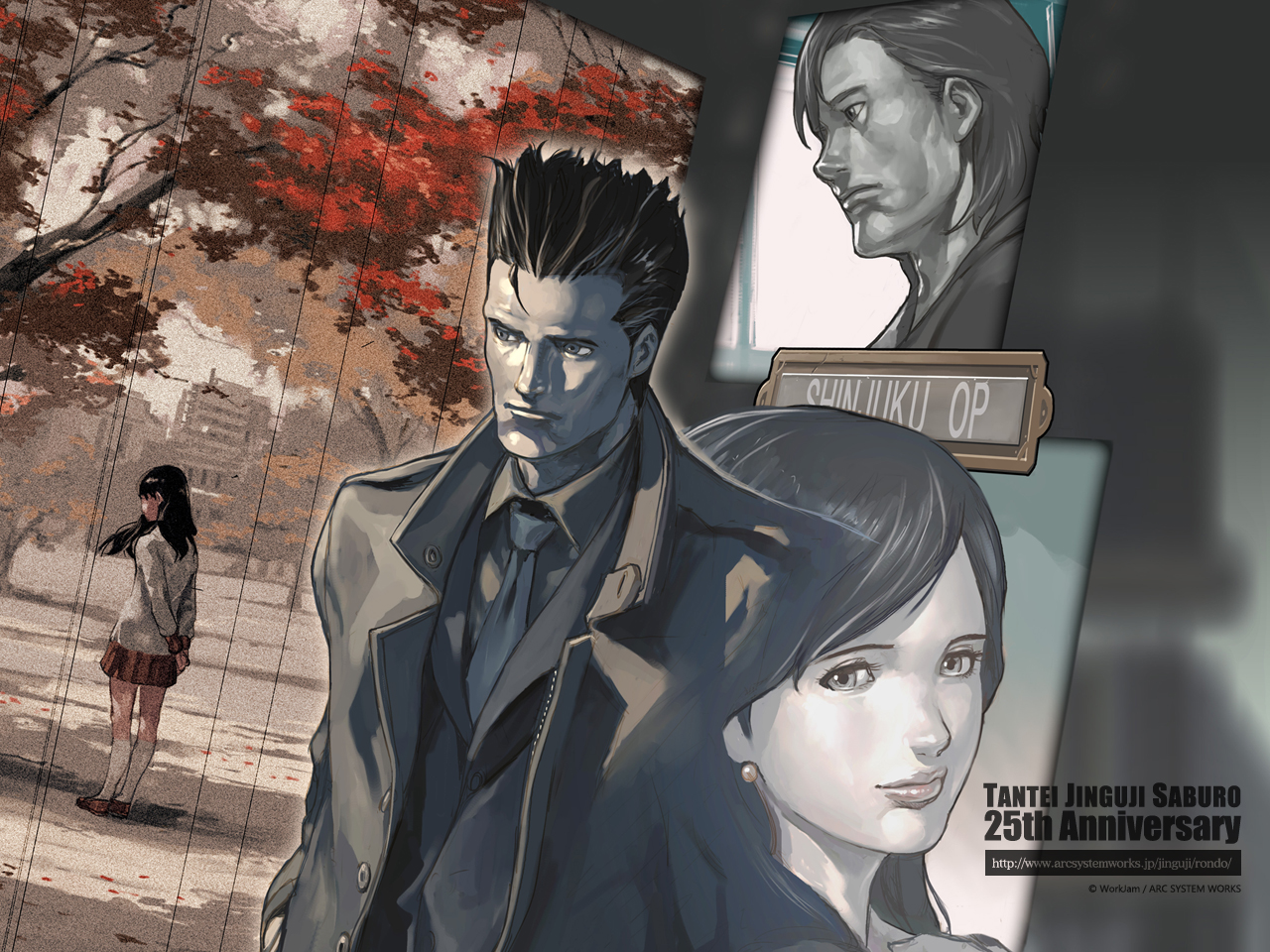 All of this could easily pass for generic crap, but in my opinion it would be a disservice as the writing does do wonders. The interactions between Hunter and Yulia are especially funny, with the latter having a moment that had me laughing out loud. This happens when the usually calm and sarcastic secretary loses her temper and begins berating a police officer; we don’t read the interaction itself, but are rather presented a recollection of the situation by Yulia herself, who tells us that “…I may have questioned the legitimacy of his parenthood, as well as implied that he had a very intimate relationship with his mother.”

The game is rather streamlined as one might expect, not having many options or mechanics to speak of. You get a many dialogue options, with some being available only after choosing certain others, and a Think prompt to collect your thoughts (I’m now realizing how that’s such a common thing in visual novels featuring detectives). You also get to move around with other characters during specific sections, giving you access to their thoughts regarding certain elements or events. And, once again, its strength here lies in how they try to mix these limited mechanics around in each chapter. Some have you only use the Think option after every section, in others you’d do well to use it regularly, as the amount of information piles up fast. 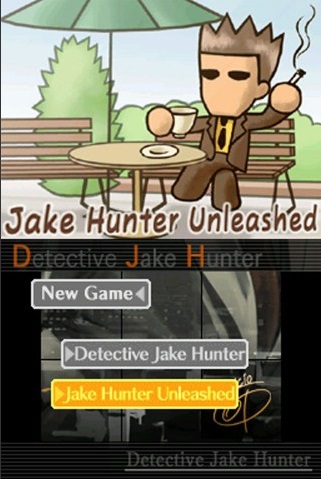 Now, the other strong point of this game lies in its extras. Besides all of the main cases, you also get access to this spin-off called Jake Hunter Unleashed, where the characters are portrayed in a much more cartoonish fashion and their personalities are parodies of their usual selves. This mode presents you with another 5 cases for you to tackle, but these are situational and much shorter – they do present a nice challenge, though. Also, during the course of the episodes, doing certain actions in a certain order at a certain time will lead the characters to mention four-letter words that seem out of place. You can then use those 20 passwords to unlock character art, extra scenarios for Unleashed, etc. It’s actually packed full of stuff, this game is.

The series continues in Japan,being available on the PSP and the 3DS. Sadly, I don’t think we’ll ever see more of these games localized, which is a shame. I had such a good time with this one that it made me really want to play the other ones. Maybe when my Japanese is good enough I’ll get another 3DS and get to them. One day…


#OpinionJakeHunterNintendoDS
Login to vote this up!