So, the Metal Gear Rising demo has been in the hands of those who bought the ZOE Collection for quite some time now, and seeing as it’ll soon be in the hands of you handsome people via standalone demo I figured I would share my impractions (repressions?) now rather than rub it in your face two weeks ago. 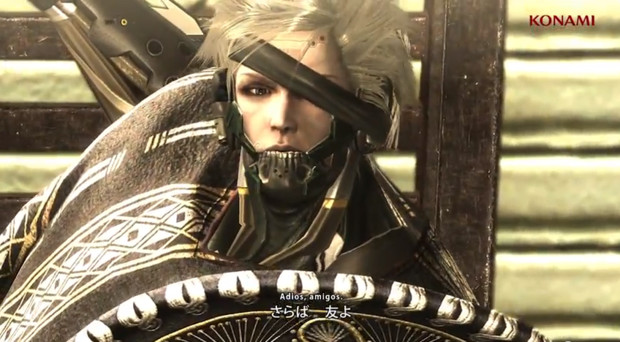 Rai-Rai’ goin’ Cray-cray
I won’t get too heavy into spoilers, really there’s not that much to spoil anyway, but there’s definite foreshadowing that Raiden’s starting to go off the deep end, maybe not MGS2 ending level crazy, but he’s definitely enjoying himself a bit too much. There’s been a lot of “guilty-pleasure guilt-trip” games lately, games that have you do something fun and violent but then turn you around and say “look what you just did”, I’d love to see Kojima take a stab at it, he might have even been the first one to do it with the whole Sorrow thing in the first place.


Codec Moments
Optional codec conversations, a personal favourite of mine, are back after being woefully underwhelming in MGS4. There’s actually a bit more banter reminiscent of Snake Eater, from conversations about life after SOP to support members making fun of Raiden’s unwanted nickname - “Mr. Thunderbolt”. It’s just a nice touch I’ve always liked about the series and I’m glad to see it back.


Can love bloom, even on the battlefield?
Metal Gear games have always been cheesier than Liquid Snake at a fondue party, and Rising embraces that and takes it to a whole new level. There’s a certain self awareness to it now, groan worthy lyrics kick in at the end of boss fights, characters sarcastically ask each other the meaning of life, and beyond the demo there’s apparently Ninja Turtle references and awful mariachi disguises that Raiden thinks are impenetrable.


Overall, Metal Gear Rising looks to combine the strengths of Platinum with the more “out there” elements of Metal Gear, so long as you don’t come in with any misconceptions of a focus on stealth or pacifist runs and just embrace the cheese then good times will be had. Really the main problem with the demo is it looks like it was built for the show floor, with a Konami person shoutsplaining the finer points as you play.
#ShareonCommunityBlogs
Login to vote this up!