6:20 PM on 08.13.2012 (server time)    0
(Back to blogging! It�s been far too long, after another stint in the hospital and some minor surgery I�m finally feeling well enough to start writing again, if all goes well I can keep it up semi-regularly again.)


Hey games industry, how ya been? It�s been a while, haven�t seen you around lately, the summer lull I guess. Listen there�s something I wanted to talk to you about, the way you�ve been acting lately is kind of...concerning. I hear you�ve been coming home later and later these nights, you�re covered in cuts and bruises, you�re starting random fights, in the face of violence you don�t seem scared or aggressive anymore, you�re just nonchalant about it, it�s getting kind of creepy. Also, I�m going to stop talking to you like you�re a person now, because that�s also getting kind of creepy, and this is starting to sound like an abusive relationship break up blog.

So yeah, violence, arguably a cornerstone of gaming, after all most games are about overcoming obstacles to achieve a goal, and killing things is a really fun obstacle to overcome, so what�s the problem? Well, in my humble-as-a-cottage-with-self-esteem-issues opinion, the depiction of violence has gotten way out of hand as of late, to the point of stupidity actually, half the trailers out there seem to follow the same distinct and disappointing pattern. We start with a slow build up, setting the tone, building tension and interest, probably lots of CG, things are going well, then the gameplay footage kicks in, and heads start exploding, and people get impaled in slow motion, and tomahawks meet faces, I�m not really sure what happens after that because my eyes tend to roll back so far I can actually see my brain cells dying, but all I can recall before I pass out is the faint whisper of dubstep in my ear. The point is, ultraviolence has become a scarily commonplace thing in gaming. 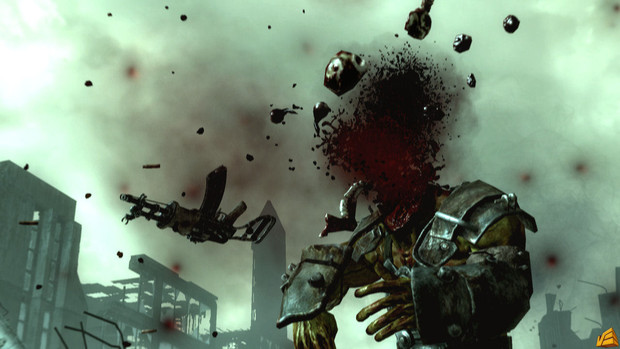 So please Games Industry, stop treating me like a psychopath, I enjoy a good power fantasy as much as the next guy, but stop making me feel like a total bastard. You�re embarrassing yourself, all the blood and guts comes across as desperate pandering, the videogame equivalent of a backwards cap and sunglasses, you�re better than this, we�re better than this, give us and yourself a little credit, show some class and tone it down a bit.

Except for the Tomb Raider reboot, because I like to imagine that all the knocks Lara gets in the prequel is setting up why she hates nature so much and spent the last ten games shooting endangered species.
Login to vote this up!