Start of the affair: Gex: enter the gecko 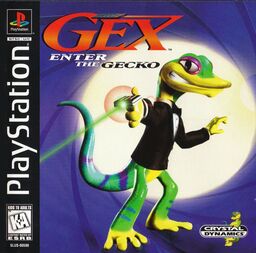 Gex is a nice multicoloured platformer developed by crystal dynamics (Who also make MediEvil) in which a posh well spoken gecko (voiced by Leslie Phillips) needs to save TV land from the evil Rez who for some reason hates Gex’s favourite media. What more do you need?
Gex was by no means the first game I played. I owned a Sega Megadrive (genesis to you Americans) for many years prior on which I enjoyed the likes of Sonic and golden axe and several of those multi-combinations. And I had other games on the Playstation before Gex. But I didn’t think of those as worth finishing (never finished Rayman!). Gex was the first game that I played with a level hub, an overworld from which you could select each level from separately and unlock new sections to by completing levels whereas all the previous games I had played didn’t even save (or at least make it obvious to my simple childs mind that I could) I remember getting a memory card specifically for it. The overworld itself had many secret area and collectables that you could reach by using Gex’s ability to stick to surfaces and crawling around the map geometry. The individual level names are inspired by popular culture films and TV inkeeping with the theme of that levels hub area, for instance the levels Smellraiser, Frankensteinfeld and Poltergex from the horror area.

Writing this has brought back some fond memories of the cartoon level and dodging giant bowling balls mallet wielding flowers and stop signs that crush you if you get too close. And my favourite level of all time was easily the Godzilla parody, in which our hero became giant and had to fight a mechanised version of Godzilla.

The game also has a totally original and epic ending in which Rez confesses that he is Gex’s father and that he didn’t always look like that but in fact was mangled when he fell into a scrap heap while trying to steal cable. But this doesn’t phase Gex as he shuts him down without remorse so he can then go back to his lifestyle of watching supermarket sweep hour after hour.

I stopped playing the game when my parents had the ps1 ‘chipped’ by some less than respectable characters. It stopped working for some reason but we did manage to get bucket loads of snides for a fiver each. Though it was a gamble whether they would actually run or not.

I would have put more screenshots in but it’s surprising how little of it seems to be on the internet.
#Community
Login to vote this up!

You know who I am.