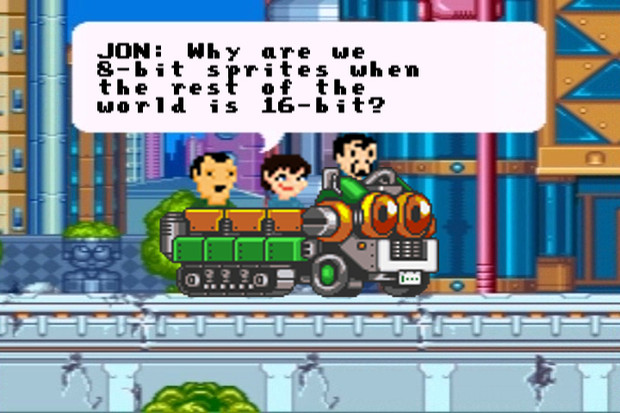 For the Bit Transmission Sprite Pack contest on the forums, I decided to flex my creative muscles and make a video instead of just an image. The "level" should be recognizable to anyone who's played Megaman 7:

- This is the first time I've ever done any form of computer animation. Things might be a bit wonky (I used only two different frames for each animation). It must be noted, though, that all the animation was actually done by myself.
- I modified some of the original sprites to do the mouth movements, and Topher's "Wily eyebrow". I grabbed the Bit Transmission logo and Geraldo Beedog from the header images from earlier episodes.
- Getting the typewriter-style text to work in Sony Vegas (which I used to make the video) was surprisingly difficult, especially to get the text lined up with the speech bubbles. I had to use several workarounds to get things looking somewhat decent. At least I learned a bunch of new video editing tricks because of this!
- After finishing it, I realized I should have done more to match the cast sprites with the vehicles (which have different levels of sharpness). But I figured that if I kept on tweaking things, it would never have gotten finished.
- As is noted in the video, I am aware that I mixed 8-bit and 16-bit sprites. However, with that sprite of Holmes wearing the construction hat, the first and only thing I could think of was Mega Man 7.
- My apologies to Topher and Electric Hydra for making them the "villains" of the video. I tried to have him flying a 8/16-bit version of the Ikaruga, but that was beyond my artistic skills. Also, apologies to Dale for not including him.
#AboutDestructoid    #Community
Login to vote this up!