9:56 AM on 02.12.2008 (server time)    0
Ahh. The silent protagonist. One of gaming's most used devices. You all know the mute hero who somehow only communicates with the occasional yelp of pain, joy, or "..."'s. NihonTiger has already talked about this (and as I was blissfully unaware, made it to the front page) but I wanted to share my thoughts on the subject. Let's take a closer look at good examples and bad alike.

Prepare for an onslaught of ranting and profanity. 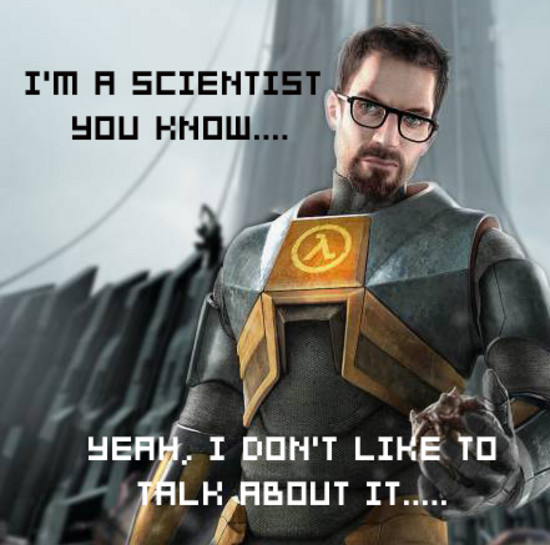 The other example I'm thinking of is Gordon Freeman of Half-Life. People tout this as the greatest example of the silent protagonist but I can only see the missed opportunity. People are fucking talking to you Freeman, say something! It annoys me to no end how he never says anything to anyone during his adventures. I'm not saying he needs to say something every 30 seconds or even say something profound, but at least acknowledge that someone is in the room with you you fucking mute! People say "But it immerses me in the world more" and I say fuck that. It takes me out personally. If I could customize my character's appearance, name, and dick size, that would immerse me, but no. Your character is already set. You are the scientist Gordon Freeman as played by the guy from House and him not talking isn't going to make me feel any more like him during the game. I just see all the potential for character development that's just lost because he never once asks "What's this awesome fucking thing in the lab over here" "You made a gun that controls gravity! How awesomely scientifically amazing fucktastic is that!?". Valve could do better that that, but you get my point. He's a scientist, but the only thing I know about him is that he's a great survivalist and he could beat your dad dead with a crowbar in 2 seconds flat. He should talk.

So what do you think? Fan the flames of War!
#Community
Login to vote this up!