Ask a Half Black Dude: My take on all this

8:42 PM on 04.10.2008 (server time)    0
Ok. There's been a lot of talk today about racism in games and I feel like I need to comment on some of the insane-o reactions to these stories. I originally was going to write this blog about a story on Kotaku that quoted Morgan Gray (the Senior Producer at Crystal Dynamics) about his feelings on black stereotypes in games, but then over here Gameboi posted about a quote from N'Gai (En-Guy) Croal pertaining to the Resident Evil 5 trailer. So I'm going to give you a 2-for-1 and talk about each separately. Strap yourselves in kids because this is going to be a long one.

First, a little background on me: 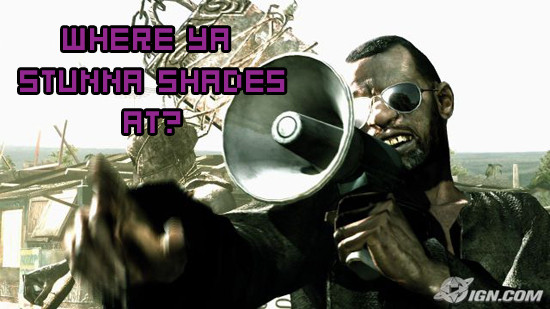 People keep saying “Well if you look for racism all the time, of course you'll find it.” or “If you keep pointing out racism, you're only perpetuating racism” which is not only retarded it's again, missing the point. If you read N'Gai's quote again, he keeps stressing the imagery and context in the trailer. That's because as a black person in America, you have this historical context of violence and oppression against blacks. For a lot of people, who grew up with this and were able to see it happen before their eyes, when this imagery of a white guy shooting up all these scary black people is presented to them with no context, they can't help but be reminded of those events. Again, N'Gai isn't saying RE5 is racist, he's only suggesting that the marketing team provide CONTEXT for the imagery when they present it to the uninformed, lest they want a shit-storm upon their doors.

This is ALL he's fucking saying.

There are some other points I'd like to make but this blog is already too long. Hopefully this will help some of you understand where these guys are coming from. I also recommend you watch or listen to Barack Obama's recent speech about racism. No matter what you're political affiliation is, he explains the issue we're talking about here pretty well. That's it. I'm out.

/longest blog ever
#Community
Login to vote this up!