"Protecting myself from your type gets expensive. And I'm on a budget."

A mining station carved into the structure of a massive asteroid. Landing lights, heavy metal plates and pressure doors. Duraplast domes provide glimpses of the sparse foot traffic inside, where exhausted miners and dock workers step aside to make way for powered carts hauling crates of imported goods to the commodities market.

Your ship sits on the landing pad. A boxy chunk of a spacecraft, as aerodynamic as a shipping crate. A single laser is bolted to the hood. The radar is older than you are- it'll tell you where the other ships are, but that's about it. There's no way to know friend from foe until they start shooting. You've got just enough cash to make one improvement, maybe some better armor or another gun. On your way to the equipment bay, you pass through the ship dealer and pass through the shadows of a  titanic cargo freighter, a boxy little tank perfect for a bounty hunter, and a sleek military-grade fighter. "I hate to break it to you..." The gaudily dressed salesman tells you cheerfully, but forcefully: the cheapest of these is way above your snack bracket.

Looking to make some scratch, you poke into the office of one of the Guilds: the lush, wood-panelled luxury of the Merchants Guild, or the gunmetal sparseness of the Mercenaries Guild. They won't take you without an upfront fee you just can't afford. So you browse the mission computer dumped into the concourse of the station and use its chunky buttons to browse through low-risk, low-pay patrols, cargo runs, and bounties. This one shouldn't be too bad, you think, not really knowing what "too bad" even means.

You head back to the landing pad. Glancing at your ship, hunk of junk that it is, you can't help but smile. It's garbage, but it's your garbage, and the universe of possibilities is yours. 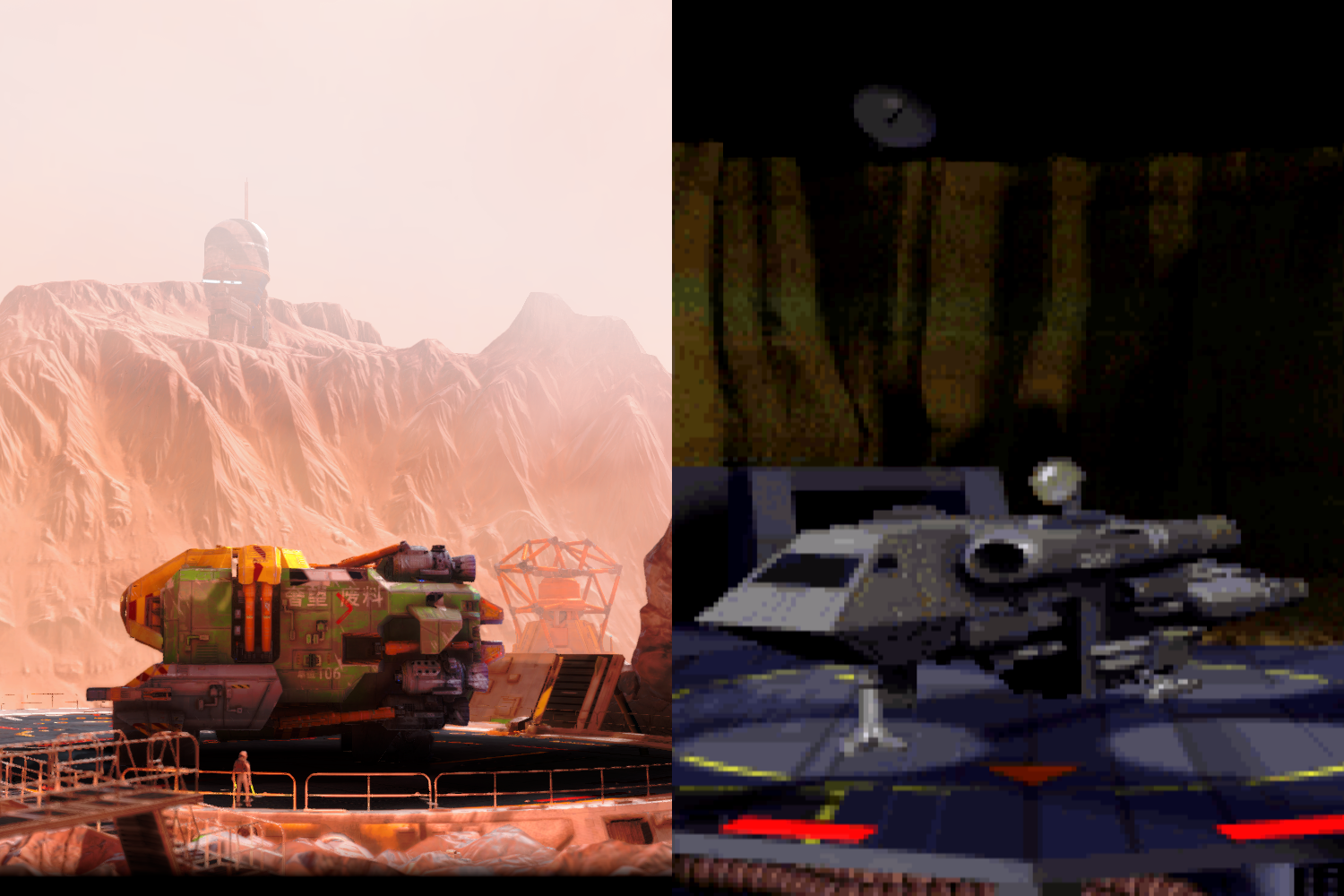 Rebel Galaxy on the left, Privateer on the right

This is the beginning of Wing Commander: Privateer, the most beloved spin-off of the blockbuster Wing Commander franchise that drove PC gaming in the 90s. It is also the beginning of Rebel Galaxy Outlaw, a brand new game by Double Damage that aims, in almost all respects, to bring that most elusive relic of 90s gaming, the space combat simulator, to modern times.

A quick perusal of the Rebel Galaxy subreddit shows why this revival has been so difficult. Gamers used to extended tutorials complain of the lack of onboarding, the complexities of space combat are reduced to complaints of "turning forever", one poster even muses what the point is of making a game so pretty only to cover it up with an ugly, chunky cockpit.

The point is immersion. In most modern games, players inhabit a character: Kratos, the Master Chief, Aloy. Conversely, many 90s PC game stories are transportive: you are the last surviving marine on Phobos; You are a traveller sucked into the world of Myst; You are a rag tag, down-on-your-luck space pirate at the edge of the frontier. Many of these games came with extensive manuals that often served as vessels for world building as well as teaching documents. This allows for player learning without breaking that all-important character immersion. In Privateer, nobody gives a fuck about Grayson Burroughs. He's a big boy, he can take care of himself. The same is true of Juno, the hero of Outlaw: She's in her 40s and was such a successful privateer that she actually retired. She doesn't need somebody talking her through how to target ships and divert power and shoot her guns. Nothing screams "classicPC game" more than having a manual in your lap. 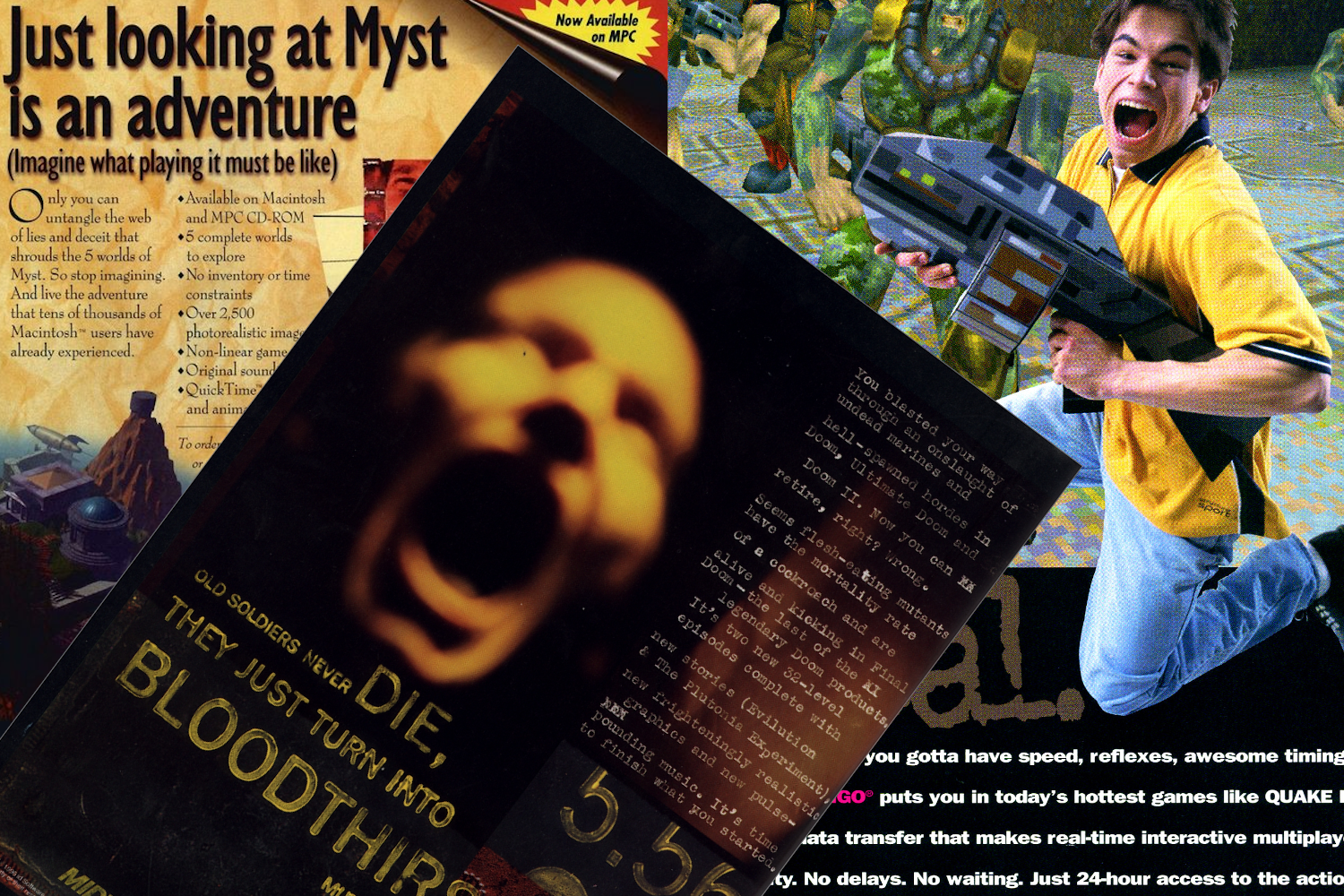 Both Outlaw and Privateer do something that few modern games dare: they just dump you into the world and expect you to figure it out on your own. The rules of both games make perfect sense, once you learn the controls. There are no hidden mechanics ticking away in the background. Everything you need to know is there on your dashboard or written down in your PDA. You aren't the Chosen One, or the Hero--in fact, you're kind of an asshole. Any of the thousands of other pilots zooming around in space could be the focus of the story. You don't matter.

Those first few trips out, either in the Troy or Texas systems, you might be completely lost, but soon the world starts to make sense. The big blue agriculture planet makes food, the mining station needs food; the mining station makes raw materials, the agriculture planet needs raw materials. Preying on the spacelanes are two types of hostiles: immoral pirates and overly moral religious fanatics. You accept missions to take them down by clearing out nav points or defending bases. Slowly, you start to bolt some better guns on your trashcan of a spaceship and other equipment: an afterburner, a missile launcher, a colour-coded radar.

You can only go so far. You join a Guild and notice many of the missions require you to travel to another star system, but you don't have a jumpdrive. The jumpdrive costs a lot of money, money you get by doing missions. It dawns on you: This is the tutorial. No, there hasn't been a checklist to follow or controller overlays showing you what buttons to push or impossibly patient NPCs talking to you like you're a baby. You've figured it out on your own. There's still a lot you don't know, and the sector is big & dangerous. You'll sort it out, make mistakes along the way, getting faster and stronger and smarter, until those days chugging back and forth stuck in one star system with an all-grey radar have become nostalgia once more.

- Not as smart as I think I am

Profesh storyteller with an interest in the unique way video games communicate with us through their writing, graphics, and mechanics.


I'm trying to play one game at a time but my attention span often won't allow that.


You can read more of my stuff at my website!