Hey! Grow Up is out so let's reflect on one of my favorite games from 2015, Grow Home!

There are few things in this world that are as adorable as a tiny cartoon robot stumbling around like he’s fresh off a 3 day bender while trying to grow plants and climb beanstalks. This little robot is the Botanical Utility Droid, or B.U.D. for short, and he is the star of Ubisoft Reflection’s open world adventure game, Grow Home. Now I know what you’re thinking, “Ubisoft makes titles that follow the same formula,” and I would normally agree with that. However, despite the track record Ubisoft has for playing it safe with franchises such as Assassin’s Creed or Watch Dogs, Grow Home delivers a unique and creative experience that you wouldn’t expect at face value.

Grow Home has a look and feel that immediately distinguishes itself from the crowd. The very first shot of the game demonstrates this very well as B.U.D. is activated from his spaceship and skydives past all of the floating islands and down to a simple beach. The reason this scenery pops so well as you fall past it is because Grow Home is presented in a beautiful and vibrant low-poly style. The simple structures and eye-catching color palette establish a lighthearted and endearing atmosphere. 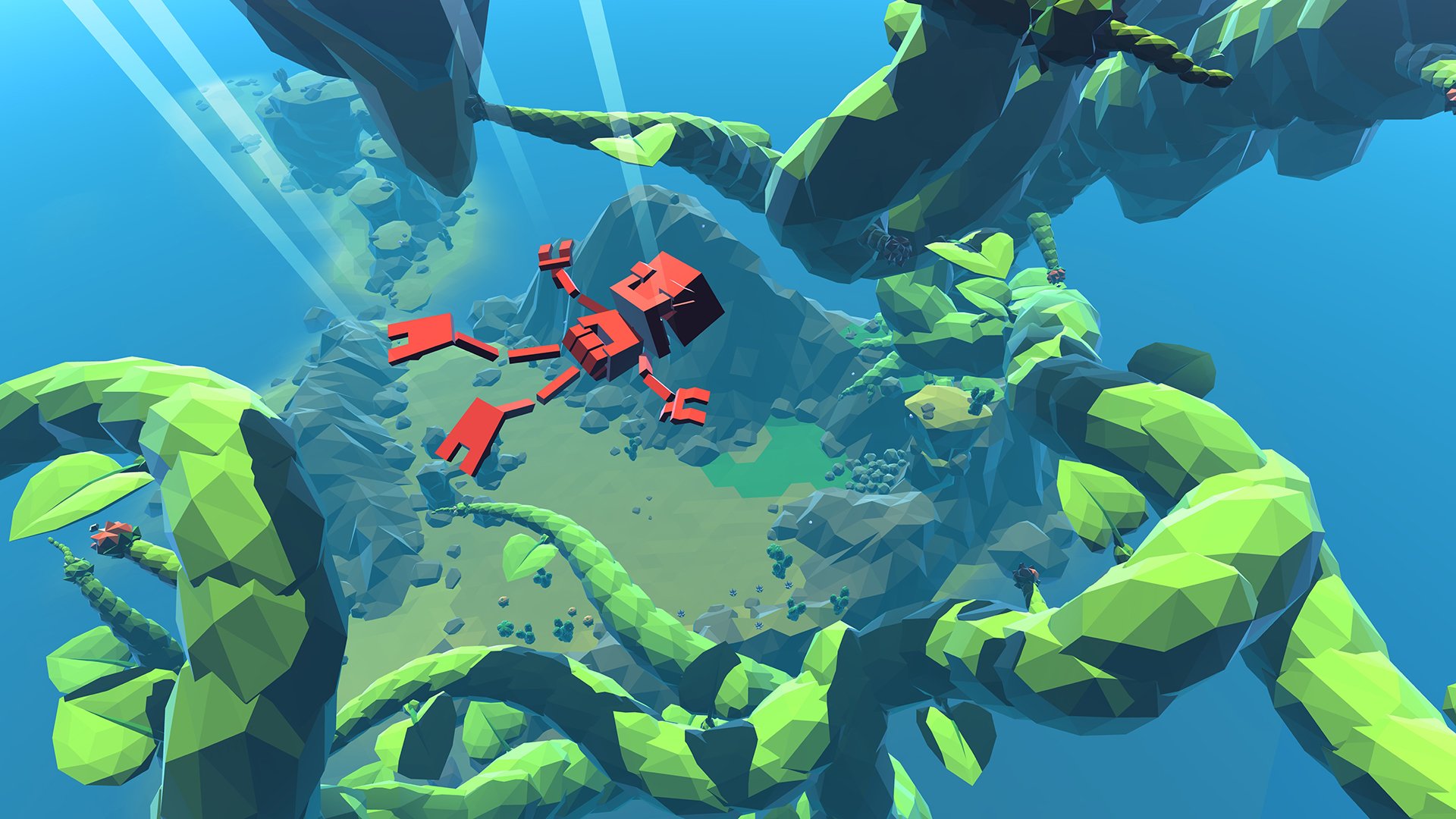 Along with the simplistic art direction, Grow Home takes advantage of procedural animation for many diverse actions. This procedural animation adds to the fluidity of Grow Home’s controls and this shows especially well when B.U.D. interacts with the world. When you change direction too fast he stumbles, when you run into obstacles he trips, when you climb and lose your handholds he will take a tumble. The lack of control is fully taken advantage of by game, much the same way it’s handled in a game like Octodad, to where it builds layers of humanity to an inhuman character. Essentially, B.U.D. stumbles and falls down more than the town drunk, but all of those little things build to the charm that B.U.D. is just swimming in. 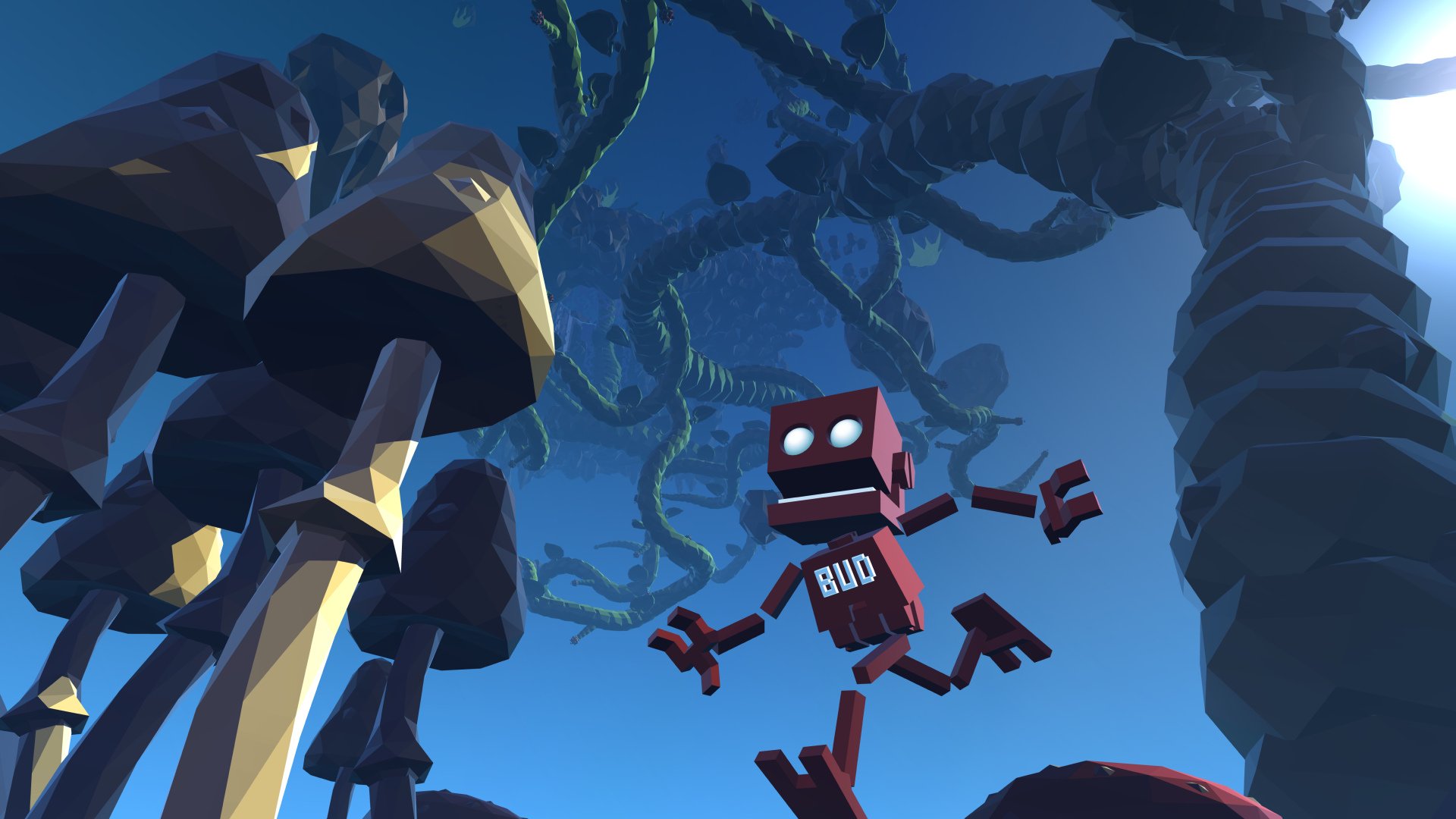 The mechanics that Grow Home presents you with are endearing and engaging at first, but they do seem to wear a little thin, even during the game’s short run time. Along with the standard movement stick and jump button that you would find in a platformer, there are also buttons that correspond with each of B.U.D.s hands enabling for some satisfying climbing mechanics. B.U.D. can clamber up beanstalks, monkey bar across the bottom of floating islands, and ride shooting vines like he’s the star of a rodeo. To assist B.U.D. with climbing, there are several powerups and upgrades that B.U.D. can collect. He can use a flower to fall gracefully, a leaf to glide like an airplane, and an un-lockable double jump and jetpack.

For the course of the 3-5 hour game you will be using all of these tools to grow your star plant as high as possible, but as you get higher up the climbing gets much more risky. It is entirely possible to fall from the very top of the plant all the way down back to the beach. In these moments your patience as a gamer will truly be tested and I myself came very close to uninstalling the game in a fit of rage when B.U.D. slipped from the top of the fully grown star plant all the way to the bottom. Luckily, in order to combat these small frustrations Grow Home has included teleporter stations on each island. While these are nice, the teleporters are still fairly far away and it is still annoying to redo your climb. Grow Home is a fantastically cute little romp. The intentionally wonky walking controls and sure handed climbing builds up character for B.U.D. despite his lack of voice. The powerups and upgrades are very beneficial, but too far and few between to keep the average player drawn for the long haul. This is an especially large problem considering the small scope of the title and one can only hope that this lack of variety will be addressed in a full-fledged sequel. However, don’t let these faults dissuade you from checking out this incredibly creative and lively entry from a triple-A developer known for taking the path of least resistance.

My name is Garett. I play a lot of video games and write a lot of stuff about video games. I try to play as many different games as I can and I enjoy a bit of everything, but some of my favorite series are Metal Gear, Resident Evil, Pokemon, and I guess Assassins Creed? I mean, I've played them all, I must be a fan.

Anyway, I'm a pretty rad dude and it would be pretty rad of you to read some of my stuff and give me some feedback.I also write over at thatvideogameblog.com
Also I have a YouTube channel and it would be swell of you to come check out some videos.: https://www.youtube.com/channel/UCYukWA_cU7sSWNuU2-NG_LQ