It is not a secret that this year has been terrible for pretty much everyone. The pandemic, the USA elections etc. Heck... the main reason I haven’t been posting here in a long time was because of me struggling with depression, anxiety and existential dread. So how about we finish this year off by throwing out the last bit of negativity to leave behind in this cursed year of 2020.

Let’s talk about the worst things in gaming 2020.

This award isn’t meant for a bad game, but rather something that was decent but a disappointment. For me that game was Taiko no Tatsujin: Rhythmic Adventure Pack, a remaster of two Taiko RPG games from the 3DS, now in English. On a technical level, it’s the same great adventures as the 3DS originals but the issue is that it feels like an extremely lazy remaster.

For starters: the English translation is poor. It feels very basic, there’s some really weird formatting in the dialogue boxes and it honestly almost feels like a fan patch you inject into a rom. Secondly: While a total of 140 songs between the two games is a lot on paper, that is still just the base games’ track list, with all of the originals’ DLC missing, which included many of my favorite songs from the series. It may just be me, but in my opinion every remake of games that are several years old should include all DLC, especially since it doesn’t seem like they even play to add it later. 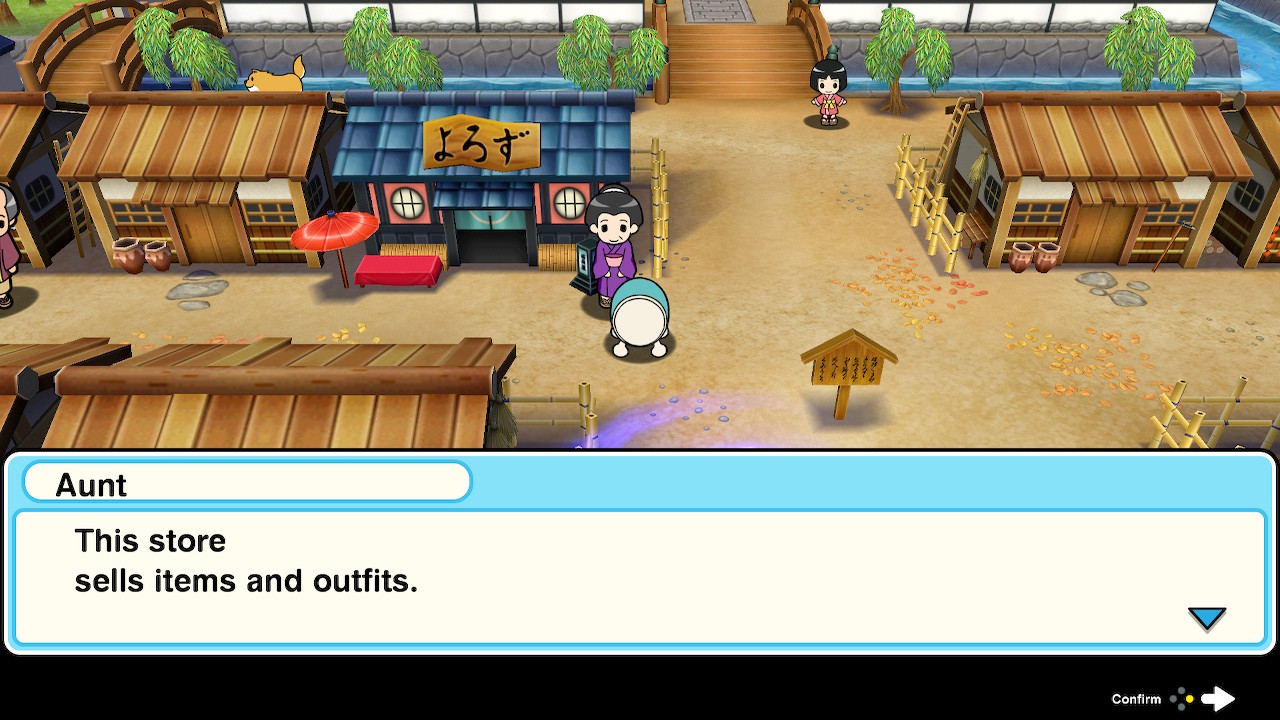 And finally, the most baffling issue... The game is entirely single-player, even in regular Taiko mode. The taiko games on DS and 3DS had 1-4 player multiplayer through local wireless and download play. The Wii and Wii U games had 1-4 local multiplayer. Taiko Drum & Fun has only 1-2 in normal mode and on top of that added an online mode. Then why on earth did they made this single-player only? Is it because they would need to make the effort to implement it because the originals didn’t have a single screen multiplayer mode? That could be it, but the game seems to run on the same engine as Drum & Fun (with motion controls and other Switch-specific  options). All of this sadly makes the game seem like a rushed throw away game, which is sad because the Taiko RPG games are in my opinion the peak of the series.

Yes, I am putting four studios here because they all deserve to be here for different reasons. CD Projekt Red wrote history with the fastest ruined reputation of all time. Pretty much everything they could do wrong, they did wrong. First and foremost, they forced their employees to months of intense crunch to pump out Cyberpunk 2077. Then when it finally came out it turned out to be a buggy, unfinished mess with both massive bug issues and some terrible programming in general. And then there was the console version, which was barely even running. And to make matters worse, they were fully aware of the problems and forbid the critics to show any new gameplay from the PC version and straight up forbid to even show the console version before release. And that after lying that it runs “suprisingly well”. And then there’s the transphobia in the game and in the marketing, the cringe-worthy stereotyping of Asian people in the game etc. I could go on and list everything but that would probably take forever.

Naughty Dog is a simpler case: intense crunch, forcing employees to watch realistic gore for reference and acting really badly to criticism. And it’s only my suspicion but it feels to me like all the praise and GOTY awards was paid for by them.

Nintendo has at the very least not done anything bad towards their employees. In fact, they are pretty strict about *preventing* crunch. Instead, they decided to do some kind of anti-consumer speedrun. Pretty much every second week we would hear about them throwing DMCAs around for things that didn’t deserve being taken down. They tried to tell everyone that the extremely common Joy-con drift is not a real issue and that it affects virtually nobody. And then there’s the whole mess with Mario’s 35th anniversary with several limited released, including Super Mario 3D All-Stars being limited in both physical and eShop releases, which is very clearly a (successful) attempt at FOMO. And to make matters worse... the game wasn’t great, but more on that later.

And finally there’s UbiSoft... which is a case so disgusting that I don’t even wanna talk about it and instead just link a video instead (cw for sexual abuse etc.)

So after many years the “triple-A” publishers finally decided to start raising prices of games to $70, saying that it’s necessarily because games are more expensive to make. This is nonsense for many reasons. Triple-A games haven’t really been $60 for quite a while now. Most of those games either have one of several special editions with more content for a higher price or have predatory microtransactions in them. $60 has more or less been just an entry price for an incomplete product, where quite often, features that were previously part of the base game were being added as paid DLC. Even Nintendo has been guilty of that with games like Breath of the Wild, where the first DLC pack included things like the Hero Mode and room-by-room trials, both of which have been part of the base game in previous titles.

As for the cost of making games... They are only more expensive as a choice. Most of that money vanishes into extensive marketing, celebrity roles and worst of all, into the pockets of overpaid execs and investors.

There were at least two worse games I can think of in 2020: Deadly Premonition 2 and Cyberpunk 2077 but I haven’t played neither of them so they are disqualified from this “award”. I bought Super Mario 3D All-Stars knowing full well that it’s just a rom collection but it’s the only official way to play Sunshine right now without spending a lot of money and also this game will likely be of good resell value eventually but I digress.

On paper, this collection is okay. The three games included are the same old classics, now playable on Switch. Why this game is my least favorite of the year lies in the details and it can be summed up in a few words: It’s effortless and soulless.

Let’s start with the basics. These games are emulated, which while not the best, isn’t bad in of itself. The problem is that the emulation is far from ideal. Super Mario 64 is 4:3 and 720p and it runs at 30 fps. Super Mario Sunshine is 16:9 and 1080p but runs at 30 fps and the controls are worse than the original due to the lack of analog triggers. Super Mario Galaxy is the best of the three, running at mostly 1080p60 (with dynamic resolution) and the only small issues come from emulating the pointer. Here’s the problem though: yes, these are all playable, but for the price of $60, they could at least go for 1080p60 on all of them. You’d think that’s hard but third-party emulators do it with ease and Sunshine can even run at 60 fps natively on Wii and Super Mario 64 has been ported to 3DS and now runs at 60 fps too. 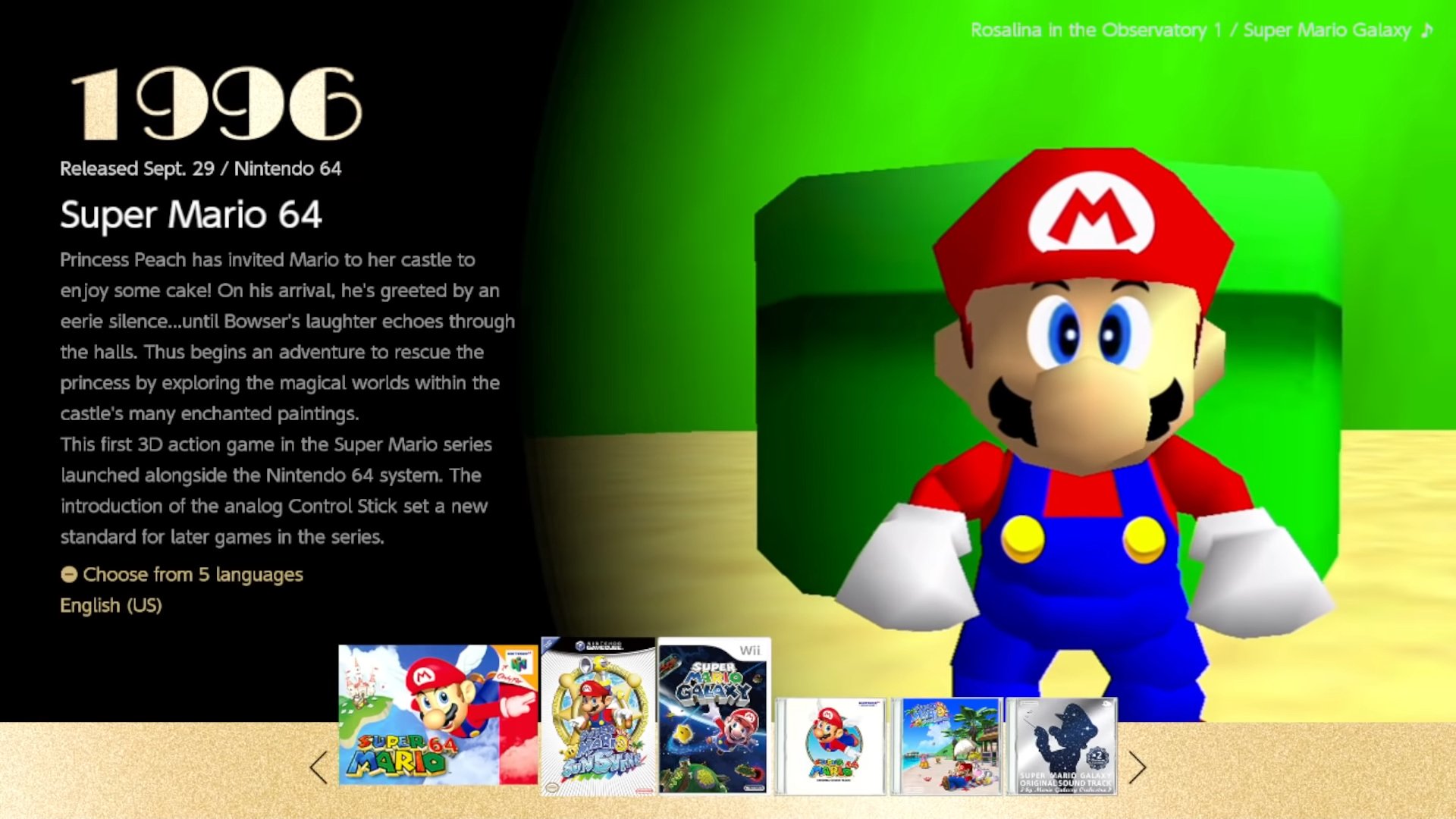 Nothing about this menu screams "Mario" but rather "unedited default template".

There’s also no changes to the roms whatsoever aside from the upscaled textures which seem to be a mix of
uncompressed textures and AI upslacing. You could say that making changes is hard in a rom, but fan-made ROM hacks prove it wrong.

On top of it all, Super Mario 3D All-Stars is... literally just a ROM collection for $60 with an added bonus of a soundtrack player. No extra content whatsoever and it is all wrapped with the most lifeless menu I’ve ever seen in a Nintendo game. It feels like it was made in PowerPoint.

Many say that it’s entitled to criticize these things, but I can’t help but compare this to other collections of this type. Even close to home, take Kirby as an example. The series got a wonderful collection of 6 classic Kirby games as well as new challenges in the Kirby Wii engine. And all of that was accompanied with a colorful menu with 3D backgrounds and characters as well as bonus features like a timeline and episodes of the anime. And all of that was cheaper than SM3D All-Stars. And if that isn’t enough, you can get the entire Kingdom Hearts series, where the old games were remastered from scratch, for less than $60 too.

Super Mario 3D All-Stars gets my Worst Game award both due to the mentioned quality of the product itself and the business decisions behind it. Oh yeah, and Galaxy 2 should be there too.

And that’s it for my Gaming Razzie Awards. Join me in the next post where I do a complete 180 and talk about all the positive things to come out in 2020. There’s quite a few of them and I still haven’t finished all the games I want to include on the Game of the Year list, so expect the second part to be published in a few weeks from now.

Welcome to the Gaming Sheepy gaming blog. My name is Sue and I'm a 25 year old trans gal who loves playing and discussing video games of all kinds. Some of my most played ones are Animal Crossing, Final Fantasy XIV, Fortnite and Destiny 2