Tokyo 42 tries to be a mix of old and new. A beautifully stylized world with old-school shooting taking place in a supposed peaceful future that is all about killing. However, not all elements work and creates a game that is gorgeous to look at, but can be frustrating to play.

Tokyo 42 takes place in the year 2042; where Nano-Meds provide immortality as long as you can pay for them. You play a nameless person who is framed for murder; leading you to become an assassin to find out who framed you.

Right off the bat, Tokyo 42 looks amazing. The city skyline and isometric perspective gives the game a stylized look to it. Massive buildings and unique architecture make Tokyo 42 stand out from anything else in the market. 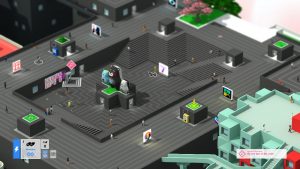 Exploring the world is the best part of Tokyo 42

The game is open-world, as you are free to explore each district of the city. Completing missions will give you reputation points used to unlock harder missions, and money that can be spent on new weapons. Despite trying to clear your murder charge, your missions will usually involve killing.

While range weapons will alert people, you can use melee to deliver silent kills. If you are spotted, you can use energy to change your disguise and slip away, along with other sneaky tactics.

The best parts of Tokyo 42 are the crazy sidequests and exploring the world for collectibles and hidden content. Unfortunately, the mission structure's focus on combat leads to the worst parts of the game.

Tokyo 42's combat draws from older isometric games like Syndicate, but it's also proof why this style doesn't go well with heavy combat.

Everybody in the game will die to one shot; making weapons about bullet speed, blast radius, and fire rate. The problem is that the isometric viewpoint makes it all but impossible sometimes to gauge depth when it comes to avoiding fire or hitting enemies. 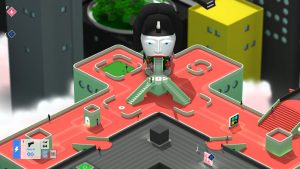 The aesthetic design is amazing

You can shift the camera by 25 degrees at any time, but this can lead to your character being obstructed by a building and then killed. The biggest offender and what arguably makes Tokyo 42 unplayable has to do with elevation.

While you are running around and firing on enemies, your character will not automatically adjust for elevation. In turn, this makes it impossible to hit anyone if they aren't at the same level as you. To adjust, you need to use manual aim; creating a targeting market that adjusts for elevation. Unfortunately, when you're aiming, it takes control of the camera.

This creates a cumbersome situation of you trying to adjust the marker, adjust the camera, while moving, while trying to dodge, and still hoping that you can hit enemies who don't have this problem. The best defense enemies have is running up and down stairs; allowing them to auto adjust their aim against you.

I also ran into problems where the perspective made it impossible to get the marker to properly target an enemy at a different height. Besides the ability to auto adjust, enemies can target and track you off screen; leading to a hail of bullets coming at you without warning. Tokyo 42 desperately needs a soft lock-on feature to adjust for elevation as long as the player is aiming at the enemy.

Tokyo 42 is a great game to look at, but a frustrating one to play. I had more fun exploring the streets than I did getting into gunfights. Whenever you're going for a unique aesthetic design, you have to be careful with how the gameplay will interact with it.

For more on Tokyo 42, you can watch my spotlight video below, with more footage over on my YouTube channel.