Forced by Betadwarf was an interesting attempt at co-op-based game design from the new studio. Following our interview last year, the team went to work on a completely different game design and the results are Forced: Showdown. Featuring a combination of ARPG and CCG design, this is an impressive idea from the studio.

On with the Show:

Forced: Showdown only has the word, "Forced" as the only relation to the previous game. Taking place in the far future, Forced: Showdown is a popular TV show where contestants fight for glory and prizes against insane odds. You'll start as one hero with the ability to unlock three more as the game goes on; the heroes have different abilities and card possibilities (more on those in a minute.) 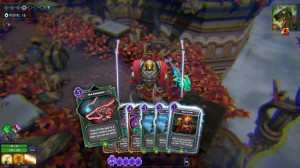 Playing the game is built around the following structure. You select a campaign to play, along with a champion and deck. Each campaign is broken up into several sections where you must play battles to unlock the boss fight to move on.

Each battle is made up of seven arenas that you have to fight through with different conditions. Play through two battles and then fight and win against the boss to complete the section and move on to the next.

While there isn't much of a story, Betadwarf has implemented a lot of ways to keep you playing and coming back for more, thanks to meta-game design and the CCG play.

Forced: Showdown is a great example of meta-game design used to elevate a game's design.  Beyond the four different characters, there are multiple ways of improving your characters and chances at survival. Let's start with the biggest one: your deck.

You can design a deck out of all the cards you have unlocked from the main menu. The cards you find are broken down by rarity, their type and if they are character exclusive. You can have a total of 30 cards in one deck, and as with any good CCG, you'll quickly have to make tough choices as to what to include.

The cards themselves don't change the characters in the sense of giving them new abilities, but they are used to modify them and the conditions of the arena fight. For instance, you can get a card for the squire of light that gives him an extra AOE attack when he uses his power. That card can also be stacked, allowing you to then triple the AOE blast if you get them both on at a time. 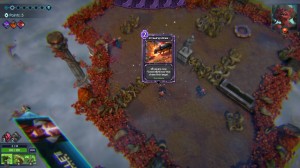 Cards are rated by their mana cost, and by default, you'll gain one additional mana point per arena over the set of levels. This prevents you from using your best stuff at the start and makes it so that you need to properly balance your deck costs. Unlocking new cards requires an in-game resource of gold.

With gold, you can spin the wheel of fortune to unlock new cards, or get shards that can be used to construct a random card of a given rarity. It's important to note that there are no microtransactions in the game; to get you more gold, you can only get it by playing.

You'll also find quests to do that are broken down by sets. Complete the set of quests and you'll get a permanent reward unlocked for your characters; usually in the form of stat increases and gold. In the campaign, you can pick up points that will be used to unlock boons which are another passive buff for your characters. These boons remain active for the length of the campaign, while the quest rewards stay active forever.

Besides the campaign, you can also run daily challenges with different conditions and get ranked on the Forced: Showdown leader board.

Forced: Showdown's embrace of CCG mechanics does a lot to elevate the gameplay, which is very important, because the base gameplay doesn't have long legs in my opinion.

Forced: Showdown shows both the benefits and limitations of a CCG-based system. While the game offers a lot of flexibility and personalization on the player's part, the actual gameplay is pretty limited. The game at the moment has four heroes with four unique moves each. The actual controlling of them is very simple; you can't perform any advanced moves like dodging out of the way or unlock new abilities to slot in.

Because of the limitations in the characters, the game becomes very repetitive from the player's standpoint. The developers were smart to randomly select what battle conditions and even the enemy cards that can get played in a campaign, but it's not enough to avoid the feeling of repetition or change the goal of each arena. As with other CCG-based games, it's going to take a very long time before you can unlock a wide variety of cards and quest bonuses, and I'm just not sure at this point if there is enough here to keep someone playing for the long run. 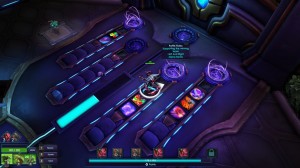 Battle modifiers can make or break your campaign attempt

One suggestion would be to give the player control of the campaign structure with cards that could increase or decrease the difficulty while impacting the rewards.

Something to mix things up after someone has down a campaign for the umpteenth time grinding for gold.

An issue that I ran into was how the game was skewed against melee heroes. Since there are no ways to actively dodge attacks, going melee puts you in range of enemies who can quickly attack you between swings, or bosses with strong attacks at close range.

Also, because of the random cards from the enemies and the modifiers chosen, the difficulty of a campaign can swing at the drop of a hat.

For instance, I lost an entire campaign run literally because of one modifier that completely went against my character. I would like to be able to see what the modifiers do ahead of time, instead of having to remember them.

Forced: Showdown may be a complete departure from the first game, but it's an amazing foot forward and a much stronger foundation for the series. There are many ways for Betadwarf to continue growing things if the game does well. For another look at Forced: Showdown, you can check out my video spotlight on the Game-Wisdom YouTube channel.