REVIEW: Warlock: Master of the Arcane 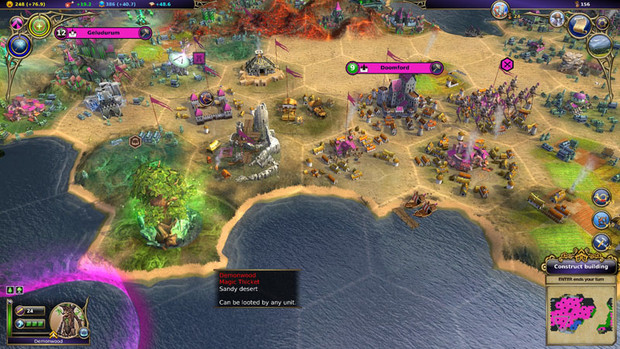 If you decide to attack a rival�s town, you should be sure that you are attacking with units that won�t be wiped out in one shot. This means that if you are attacking a town surrounded by magic towers, your character better have a strong resistance to magic or high melee resistance if the town is protected by soldiers. Once you have captured a town, you gain access to its race, so if you are playing as undead and capture humans, you then have access to human buildings and units.

Battles play out somewhat like Fire Emblem, with an estimated damage indicator for each side before you decide to attack. This is especially helpful since identical unit�s strengths can vary greatly due to buffs.

If at some point you find yourself in a difficult battle or short on food, money, or mana (the three economies in the game), you can simply cast a spell that will help you since you are a mage! All spells require mana. Spells (besides your default ones) must be researched before they can be cast. You can also randomly receive spells by looting monster lairs or by completing certain favors that gods ask you to do (build an altar, defeat their enemies, etc). Spells vary from giant firestorms, plagues of locusts, summoning ghost wolves, to spells that weaken or buff units. Each spell takes a different amount of time to research, depending on how strong it is and how many buildings you have dedicated to research. The thing you are going to either hate or love about the game is that you can only research one spell at a time, and the spells you can research are completely at random (starting with weaker spells). At first this annoyed me, but I believe that it is there for balance so that you can�t choose the spell that will lead to a giant fire spell right at the beginning of the game.

It should be noted that Gods play a significant role in the game. They can greatly help you if you do their bidding. However, if you piss them off, they might just come down and start destroying all of your towns.

Another huge part of the game (and a nod to Majesty) is the inclusion of lords. They are essentially very strong mercenary units that have a high upkeep cost. These units can also equip special items to enhance their abilities, which normal units can't do. Winning a battle can often come down to whether or not one of your lords is participating.

There are also some light diplomacy elements which allow you to negotiate with rival mages. You can declare peace, war, non-aggression, or trade. The diplomacy isn�t very detailed, but it does affect how rival mages perceive you, if they will allow you cross their land, and if they will attack you.

Technically speaking, the game gets the job done well enough. Sounds are great and satisfying; the clash of metal when soldiers attack and the sound of arrows hitting are spot on. Each lord has their own voice actor that helps give them their own personalities. Some of the units are also voiced, with the human units generally having comically over-done heroic lines. Graphically, the game is pretty and has its own style, but ultimately isn�t anything that�s going to blow you away. It�s nice that you can zoom right up into the action though and get a semi-detailed look at your units. There are lots of varied landscapes (snowy mountains, deserts, swamps, etc) and each of the races has their own structures that make them easily identifiable.

My first game on normal difficulty on a medium sized map, took me 15 hours.With the amount of content and beta multiplayer just starting, the game is a steal at $20! If you enjoy sending units off into unknown lands behind the fog, building up your army, and conquering anybody that dares stand against you, this game is a must buy! It�s definitely a �Just one more turn...� game that will keep you up later into the morning than you probably want.
#ShareonCommunityBlogs
Login to vote this up!