Xbox Game Trials Might Have Changed Gaming for the Better

The year was 2006, about six months after the launch of the Xbox 360. I had gotten mine just in time for summer and was looking for something to play. None of the launch games really caught my eye, though the newly-released Ovlivion was on my list of games to get. Before that, though, I hooked up my system, logged into Xbox Live, and checked out the new and improved Xbox Live Arcade. Microsoft had dabbled with downloadable arcade games on the original Xbox, even before Nintendo's Virtual Console was a thing. At this point, though, XBLA only had a few games including some of the arcade titles from the original Xbox, a free copy of Hexic, and Geometry Wars: Retro Evolved. I'd heard some good things about Geometry Wars leading up to the 360's launch and had a passing interest in it. When I navigated to the game page, I was met with a surprise: I could try the game for free. I could try all the games for free. 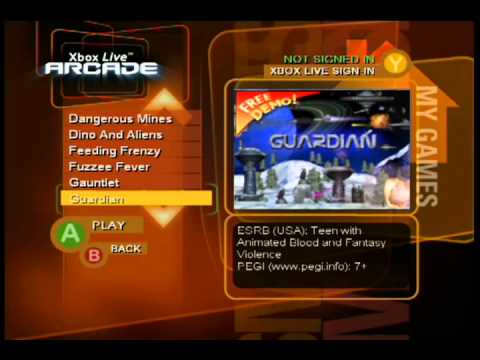 The landscape of gaming a decade ago was radically different. Back then, probably 90% of games still came on discs. You couldn't just preload the latest AAA games on your system and start playing them at 12:01am on release day. Microsoft took a gamble by allowing any new releases at all to be purchasable by download only. It was an idea that could have completely tanked, so they only supported smaller "pick up and play" games to be downloaded at low prices via their Arcade service. It really was like a virtual arcade (something they literally had years later, if anybody remembers that). Geometry Wars was mostly single-handedly responsible for the success of XBLA, just as Halo 2 is credited with the success of Xbox Live itself. But I believe it was the decision to give these downloadable games mandatory trials that was the real key to success. How many people do you think would have bought Geometry Wars if they couldn't try it first? Just owners of Project Gotham? Nobody?

The mandatory trial policy was something that sold me on a lot of games I wouldn't have normally even given a shot. I remember Super Meat Boy having a lot of hype and getting a lot of positive press, but everything I saw of the game had me convinced that it was just to difficult for me and I wouldn't enjoy it. When the game finally came out I thought "What the hell, I'll download the trial version and see." Super Meat Boy quickly became one of my favorite games ever. These weren't just demos either; this was a completely thought out an ingenious system. You would actually download the full game, but have all but a fraction of the content gated off. The game would even tell you stuff like "if you had the full game, you would have just unlocked this achievement" as incentive for you to buy. When you finished the trial, the game would then give you a prompt to pay and unlock the full version without having to stop playing. They got me so many times with this! If I liked the game, I'd be inclined to buy it right then and there to continue playing.

What Microsoft did here was basically adopt the "free to start" model before it was popular with mobile games. Of course, these weren't freemium games or games with microtransactions. You'd play through the beginning, pay once, and then own the full game forever. It encouraged me to try anything and everything because there was no risk involved, so it ended up expanding my taste in games. Plus, I'd imagine a lot of games probably made more sales this way than they otherwise would have. Today, I usually just wait until a game is really marked down if I'm not sure I'll like it, or I'll just wait for it to be given to me for free, as most of the good ones are eventually. I don't really even buy these types of games anymore because of this, and that's a real shame for the developers.

When the Xbox One launched in 2013, just about every new game released digitally. Microsoft decided to retire the Xbox Live Arcade and merge all available digital games into one Xbox Store rather than segregating them. This made sense, as it gave all games the same type of exposure. But they also got rid of the trial rule! Now to demo a game, you'd literally have to wait and see if an actual demo was released for it. I was bothered enough that I couldn't try games on WiiWare or PSN last gen, and this gen I can't even do that anywhere! The trial feature was, literally, a huge selling point of the Xbox 360 to me and I can't image why they'd abandon it. Microsoft had the opportunity to set a precedent here that others would be sure to follow, just as Sony did with offering free games. Can you imagine if they expanded the idea instead of getting rid of it? Instead of treating downloadable games like retail games and getting rid of trials, what if they treated retail games like downloadable games and gave every game a trail?

Imagine this: A big new release is coming out and it sounds cool but you're not completely sold. You download the full game on release day because it's free to start and play through the first level and maybe one of the multiplayer modes. You like it, purchase a key, and then keep playing. This seems like the logical next step in an age where we can't just go out and rent games any more (I know there's GameFly but they suck. Trust me, I used to use them.) and most games released don't have any kind of demo. Microsoft could have set the stage for a future like this, where any game could be started for free and fully unlocked with a button press. Instead, we've gone backwards. Even worse, now we can pay to play unfinished games! I mean, yeah, they probably get sales from people who were on the fence and bit the bullet anyway, but I can't image it would outnumber the sales they'd get from people who would completely ignore certain games because of a paywall. Quantum Break, for example, I think looks cool but I'm not going to buy the full game just to try it out. But if I could demo it first, and if I liked it, I'd probably buy it right there on the spot for full price.

In researching this subject, I discovered that the Xbox One does in fact now offer game trials as of late 2014. I didn't know this until just now, and you probably didn't know this either. The key word here being "offer", as it's now left up to the developer or publisher whether they want to have a trial mode for their game. Not surprisingly, this isn't a thing anybody makes use of because it's not a thing they're required to make use of. I searched through 20 pages of games on the Xbox One store to see how many games have a trial and found the following:

That's only 21 games out of 400. Not good! On the Xbox 360 every single XBLA game had a trail mode. I think I'll give some of these a try just out of principle! There was no way to filter which games have trials either, so they weren't even easy to find. Microsoft should have doubled down on trials from the beginning by making it a key aspect of the platform instead of half-assing it a year later. It's the kind of thing they should have been focusing on instead of DRM. They basically even had this feature with one of their launch titles, Killer Instinct, yet never utilized it again.

One of the best hardware features there ever was, destroyed in an instant. I'd love to hear the reason why it was removed in the first place. It better have been a damn good one.