A Compulsive Collector's Haul - Why I <3 The Trading Forum Edition!

1:32 PM on 02.02.2010 (server time)    0
Well folks, it’s the return of yet another edition of A Compulsive Collector’s Haul! Today’s haul is yet another plea from me to get the community more involved in the Trading Forums! I’m willing to bet that this is probably the biggest trade that has gone down in the thread, and probably will be for quite a long time. As regulars of the Trading Forums may know, Harry Hood was trading away his entire gaming collection, and boy did he have some REAL GEMS! With that said, he didn’t want any games in return for the trade, but electronics like a digital camera, memory cards, etc. So, my homeboy possumwrangler and I decided to price some things out and offer him a bunch of electronics in return for his goods. It didn’t come cheap, but I think all parties were pretty happy with the end result. With that said, on with the show . . . oh yeah . . . Okami . . . you know that game? It’s totally sweet . . . but has nothing on Ocarina of Time . . . hahaha! Hmmm . . . that last comment may have been pointless now, but I still felt the need to say it! ^_^ 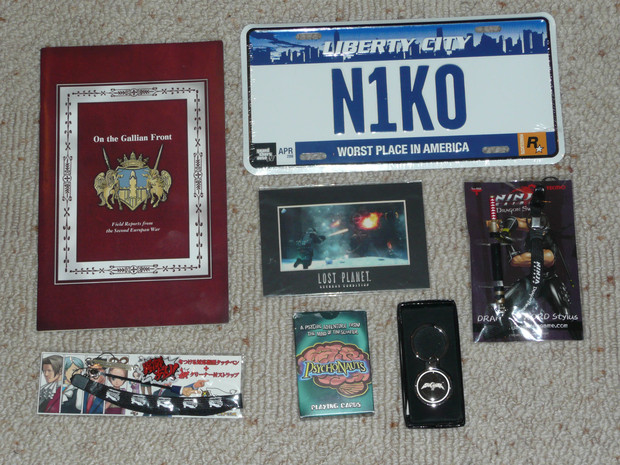 Oh shizz! Even more swag for me! I should really get around to playing Valkyria Chronicles, especially with how everyone says it’s super sweet, but I’ll do with my On the Gallian Front: Field Reports from the Second Europan War booklet. There’s also a Grand Theft Auto IV N1K0 License Plate, another Lost Planet: Extreme Condition Limited Edition Laser Cel, a Ninja Gaiden Dragon Sword Stylus (damn this thing is cool), a Phoenix Wright Stylus (this is a double so it may be free swag in a trade I do), Psychonauts Playing Cards, and a Soulcalibur IV Keychain.

That does it for yet another edition of A Compulsive Collector’s Haul. I’m thinking of making a mini-banner to put before all of my hauls, since it’s pretty much a series now. I’m trying to think of ideas and such of what to put into it, so any feedback or suggestions would be greatly appreciated, unless someone wants to make me one, hahaha! Once again, my JoeCamNet post will be delayed, as I’m getting yet another shipment from him, but I still have more goodies in the pipeline, so stay tuned. Also, get your asses to the Trading Forums!
#Community
Login to vote this up!