6:23 PM on 03.02.2010 (server time)    0
Dag yo! Welcome to yet another edition of A Compulsive Collector�s Haul. I tried to think of a better subheading for this edition, but it truly is just a bunch of random awesome stuff. I have my typical haul from my game finding haven of Cash Converters, stuff from miscellaneous other stores, the expected collector�s editions, and well, one fairly rare Atlus game in my continuing quest to catch �em all! Hahaha! Bad reference there. I�m still trying to stick to my resolution to have more updates to this series, and for the most part I�ve been keeping up, but I�ve got to pick up some slack, as I almost have another haul pretty much ready. I�d also like to give a shoutout to TheCleaningGuy for posting a completely unnecessary but duly appreciated blog about some stuff I sent him. Don�t worry about it mate, and I�m glad you enjoyed it. I have mentioned lately that I totally didn�t write an Okami fanfiction for what I thought the sequel should be like and that Okamiden is like totally going to be everything I thought the Okami sequel should be and that my life totally doesn�t revolve around Okami? Just thought I�d remind all of you out there. Hahaha! Regardless, on to the pictures and the games folks! 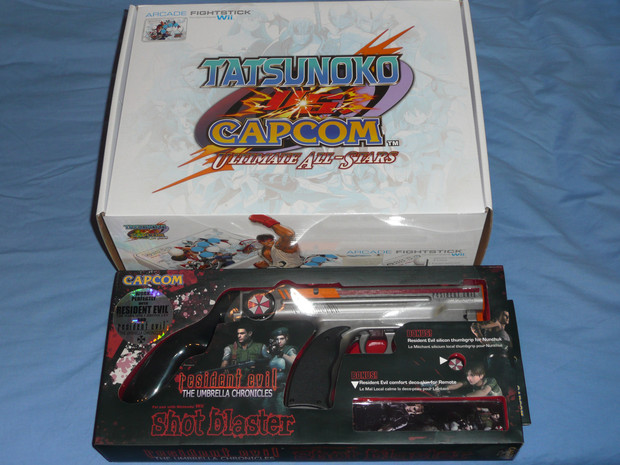 Last but not least, we have a Tatsunoko vs. Capcom Fightstick, which I�ll probably end up using eventually, when I get around to playing the game, and a Resident Evil: The Umbrella Chronicles Shot Blaster, which I got bundled with the game for a very reasonable price.

Well, that does it for another edition of A Compulsive Collector�s Haul. I hope you all enjoyed this one. Stay tuned still, for the forever coming soon JoeCamNet super haul, as well as a few imported special editions that will make some of you guys scream! Until next time, latez mates!
#Community
Login to vote this up!