2:26 PM on 02.27.2011 (server time)    0
Howdy mates! We’re back with yet another edition of A Compulsive Collector’s Haul! I’m finally on the second to last 5 month catch up blog, before I get to my “recent” catch up blog, then I’ll finally be caught up . . . for only a short time knowing me . . . >_< Well, those of you who are reading are in for a bit of a treat today. I’ve got some swag to show off today! The more I think about it, the more I think about how in terms of the rate I collect swag at, I didn’t really get that much over the past 5 months . . . -_-‘ Still, hopefully you guys enjoy seeing some of it. We’ve got stuff from Club Nintendo, EB Games pre-order bonuses, stuff from eBay friends, stuff from the super awesome kickass guys from Fangamer (which may I add, they will be at PAX East so I suggest anyone going to TOTALLY check them out and buy their awesome stuff! ^_^), and finally a couple standees of which I have absolutely no room for. O_O Due to certain things happening on the site, my “post bannism trolling that isn’t really true since said people are not banned” will be on hiatus for the next little while . . . hopefully you will no longer be confused BulletMagnet my homie! =P On with the show!

NOTE: Due to my absence at PAX East this year, but my undying obsession with any and all things swag related, anyone going to PAX East that is willing to pick up extra swag or swag from specific booths for me, PLEASE Private Message me, as I am VERY willing to compensate/trade you games or other merchandise for awesome swag! I WILL most definitely make it WORTHWHILE for you! 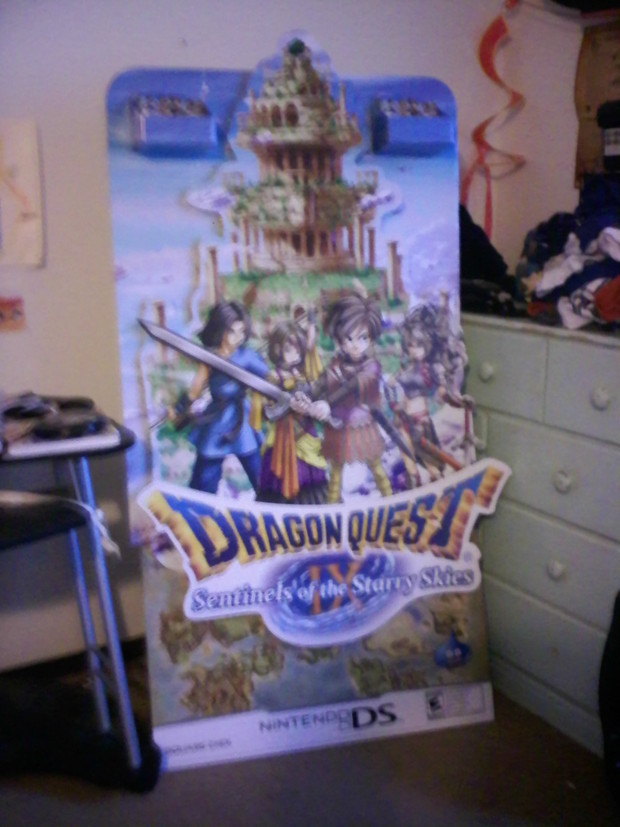 So, I’ve invested over 300 hours into Dragon Quest IX: Sentinels of the Starry Skies and it is ballin’ as hell. Once again, I don’t have room for this awesome standee, but the first picture just shows the title panel of the game, while the second shows a blurry picture I Google’d. It’s actually pretty cool since in the top corners it has some “shelves/holders” for promotional books they had for before the game was out. I got this one from awesomeness . . . that is all that needs to be said! =)

So, that does it for another edition of A Compulsive Collector’s Haul! Next week will be my final 5 Months catch up edition, then I can finally get caught up on my recent stuff! Next week will be the super cool “Hardware” edition my friends, so if you’re interested, please do look forward to that. I promise you’ll be pleasantly surprised with some of the stuff I managed to get, as it came from the best store in the world . . . Cash Converters! So, until next time, latez mates!
#Community
Login to vote this up!