Well holy tap dancing christ! It’s time for another edition of A Compulsive Collector’s Haul! I have a record 99 items of swag, promo, E3, and various other odds and doodads here to share with you. This stuff has been accumulated over the course of close to half a year, since I’m THAT far behind in updating/posting stuff. >_< We have stuff from the recent E3 convention and all with some highly sought after rarities, something that was limited to only 200 every produced, some Final Fantasy XIII stuff that’s been imported, a super kickass Club Nintendo Japan item, awesome promo stuff from the AMAZING SouthPeak Chupacaubrey, some EB Games and Gamestop pre-order bonuses and awesome promotional items, some Star Wars stuff thrown in for good measure, some Starcraft II items, and much much more. So, grab a drink, maybe make a sandwich, hell, have a full fricken meal . . . let’s take a look at what’ve I’ve gotten . . .

*NOTE* This stuff has been obtained though eBay, eBay friends, EB Games’/Gamestops as pre-order bonuses and just promo material they were looking to get rid of, friends, super awesome Product Marketing Managers, mini-conventions, etc. 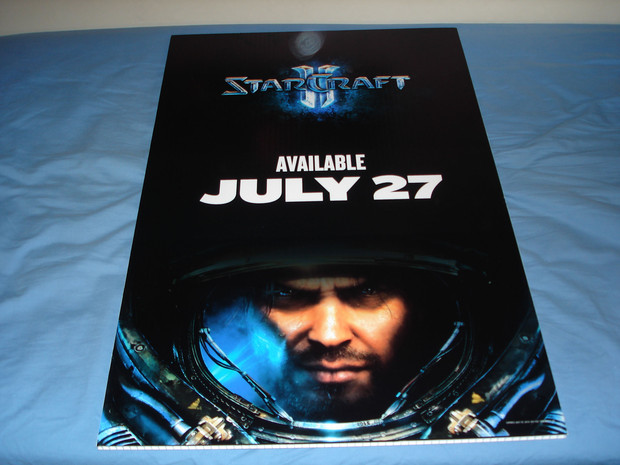 A StarCraft II: Wings of Liberty Bristol Board Advertisement of the game, featuring the awesome Jim Raynor.

Well, that does it for an obscenely long version of A Compulsive Collector’s Haul. By PAX, I believe I’ll FINALLY be freaking caught up with everything. I believe my post next week (hopefully) will be of the much anticipated (by some) console/hardware post that I’ve been trying to get to forever. So, until next time, latez mates.
#Community
Login to vote this up!