Maybe a Final Fantasy VII remake is a bad idea

During the Playstation Experience last week everyone got to see one of the most trollish presentations in a long while. I am of course referring to Final Fantasy VII announcement that the PS4 will be getting a port of the PC port of one of the best Final Fantasy games.

By itself it is not much to get worked up over. The problem comes from how Square Enix presented and built this presentation up.
At TGS we had Square Enix presenting nothing about any upcoming Final Fantasy games and instead promised there would be big news at the Sony conference coming up later in the year with the tag line “Please be excited”. So when the Playstation Experience conference rolls around and Square Enix takes the stage you can understand why the crowd would already be a little excited. Are we going to see more news on Final Fantasy XV or Kingdome hearts 3? Then this shows up on the screen. 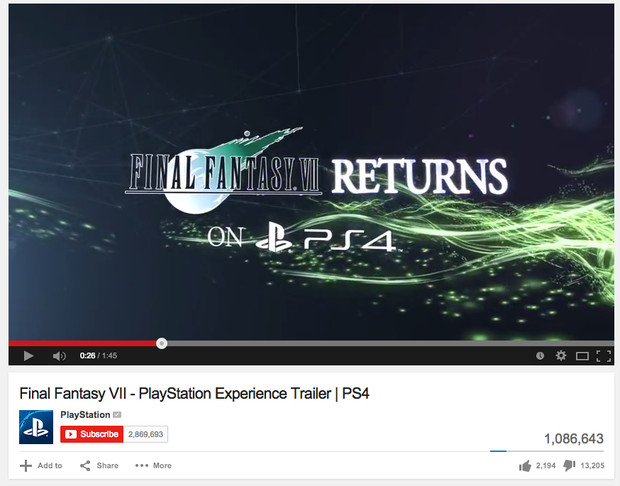 Huh, I wonder why there could be so many dislikes for this?

Final Fantasy VII on PS4! This can only mean one thing they have finally caved under the immense amount of pressure and have started the FFVII remake!
Wait. What is happening? Why are you showing us PS1 footage? 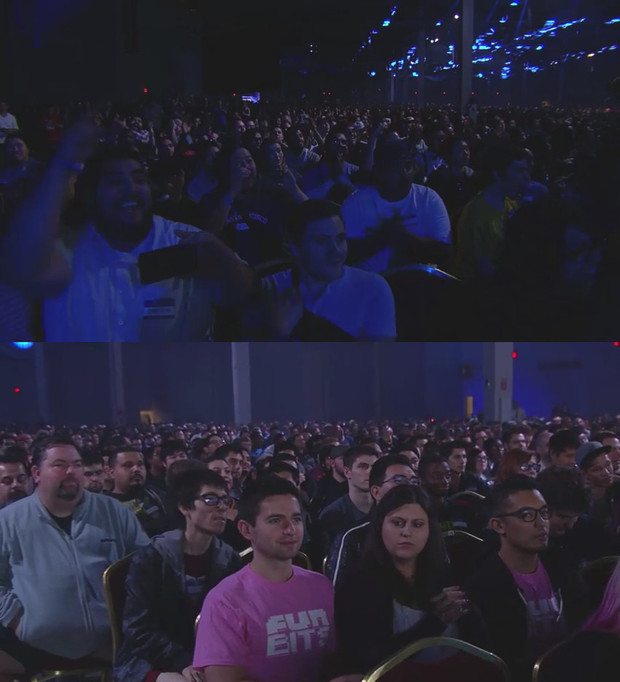 Yay a port of the PC port that is already available for anyone with a computer advanced enough that it can run the internet.
Why they though this deserved any entire presentation to itself is anyone’s guess. Who knows maybe they honestly believed people would care that a game they could get on the PS3 and PC could now also be bought on the PS4.
Obviously the internet reacted just how you would expect labelling this presentation as one gigantic prank by Square Enix and every comment section you can see people clamouring for the remake that was teased at all the way back at the tech demo years ago.

A lot of people love FFVII and many others say the love it gets is overblown. I think this type of divide works along the Ghibli movie logic where the first one you encounter is always going to be the best in your eyes. At least that’s how it works for me.
FFVII was the first Final Fantasy game I touched and I absolutely love it. I still love that game with its Lego inspired characters and nonsensical story. Tifa is still one of my favourite female characters because she was the first woman in anything that kept up with the boys in a fight and not only that could do a suplex on giant robots like it was nothing. I loved that the first time you meet Cid he was just swearing at everyone and everything over tea being served. I still remember the world that the game let you explore I didn’t even hate chocobo breeding to get the Knights of Round material (Probably helped that I had a guide).
FFVII is still one of the best games I have played in my eyes and with the way Square Enix is now I do not want them to touch it with a ten foot pole.
So here is a few reasons why a remake would be a terrible idea.

1. The Weirdness
On the first disc of the game after the second mako reactor is blown up you bump into Aeris (or Aerith) in the slums. She directs you to the Wall market where you see Tifa being escorted into Don Coreno’s mansion. He’s interviewing girls to be his ‘date’ for the night. So the only logical option for Cloud to get in contact with Tifa is to get in drag and be interviewed as well.
Does anyone else remember what happens next? It involves you doing a squat competition with the head drag queen in the area to win a good wig. Optionally you can then visit the Honey Bee Inn where you can partake in peeking through keyholes, get busy in a groups session with a bunch of muscular men or have a panic attack before the girl arrives in the %#$* room. Also if the title Honey Bee Inn is too vague let me elaborate. It’s a brothel.
Now feel free to comment if you believe that Square Enix would include that in its remake of FFVII because I don’t see it happening at all.
That was one example but the game is littered with weird little moments like that. At one time Barret takes time to dress up as a sailor to see how cool he looks. Another time Red XIII the red, talking, lion-thing tries to infiltrate the evil company Shinra by dressing up as a human. All of this stuff is dumb and weird and it all added to the unique taste that made up Final Fantasy VII.
With how sanitized the current Final Fantasy’s are can anyone see them bothering to model and animate this stuff into the game?

2. All the Mini-Games
This game was packed with mini-games. Off the top of my head I can list the motorcycle chase out of Midgar. The marching in tune in the town of Junon. The strategy game at Fort Condor. Chocobo racing. Snowboarding down a mountain range. The Submarine fight and the digging game at the archaeology site.
All this stuff is pretty hard to create and it is amazing that all of it was crammed onto three PS1 era discs. Can anyone list the same amount of mini-games in the current Final Fantasy games? I don’t remember much being in Final Fantasy XIII and I found the others to be so bad that I did not get very far in the other two that came out. So maybe they can do these little distractions well. But the mentality of Square Enix just seems to be so lazy recently that I have little faith that they would include these in a remake let alone make them good.

3. The Tone
By having a remake done things are naturally going to change. How much they change the tone of FFVII is another thing that worries me. If you want get a better understanding of where I’m coming from watch Final Fantasy VII Advent Children or play Dirge of Cerberus. Both depict the world of FFVII as a bleak grey world with very serious and gloomy people living in it. This is how Square Enix seems to perceive the world of FFVII and it is a complete contrast to the colours and variety that the game had. You wandered deserts, caves and the bottom of the sea in FFVII you were not confined to metal cities or forgotten buildings. But that is what Square Enix thinks fans want. That’s why they gave us a depressed Cloud in Advent Children instead of the man that got his shit together at the end of the game. Because that is how Square Enix thinks the majority of people see FFVII and they are going to cater to that crowd. So how much are they going to change in a remake to market to this crowd instead of doing their best by the original game.

4. The Hard Truth
The biggest mistake in Square Enix history was not releasing Final Fantasy: the Movie or the debacle that the crystal saga developed into or the initial release of Final Fantasy XIV. On a wall in the office of Square Enix under the title of “Never ever do this again” is the FFVII tech demo.
Let’s be honest with ourselves. Deep down we know Square Enix never intended to do a remake of FFVII. They put out that tech demo as a way to show off the power of the PS3 and pay tribute to a popular game. It was the gaming community that latched onto this and out of nothing developed this belief that a remake was coming. Ever since Square Enix and the gaming community has been cursed by this constant expectation that it would someday come out.
I am willing to bet that is the reason why the PS4 tech demo was about a bunch of random cult summoners instead of another final fantasy or dragon quest game. They know not to make that same mistake again.
To be fair to the gaming community Square has not dealt with this well. The perfect example is what was stated at the start of this post. They have never made a concentrated effort to stop these rumours and have even fuelled the fire by allowing developers to say that they would think about it someday down the line instead of taking a firm stance.

It has all developed into an ugly mess of rumours false promises and invented statements. I cannot see anything good coming out of this disaster and will be quite happy if a FFVII remake never sees the light of day.

Been playing games since the super Nintendo era

I play the good games and the ones you play only because they are painful. ( Looking at you Beyond: Two Souls)

Doing this because eeehhhhh why not