Upon starting the game, the player is told they're the new principal of the academy in Valthiria, which is ruled by five 'regular' Queens and one High Queen over them. The former principal left his post to be at his ailing wife's (the High Queen) side. The school has to be rebuilt nearly from scratch, as all the previous mentors have left and the school has only the bare minimum of facilities. 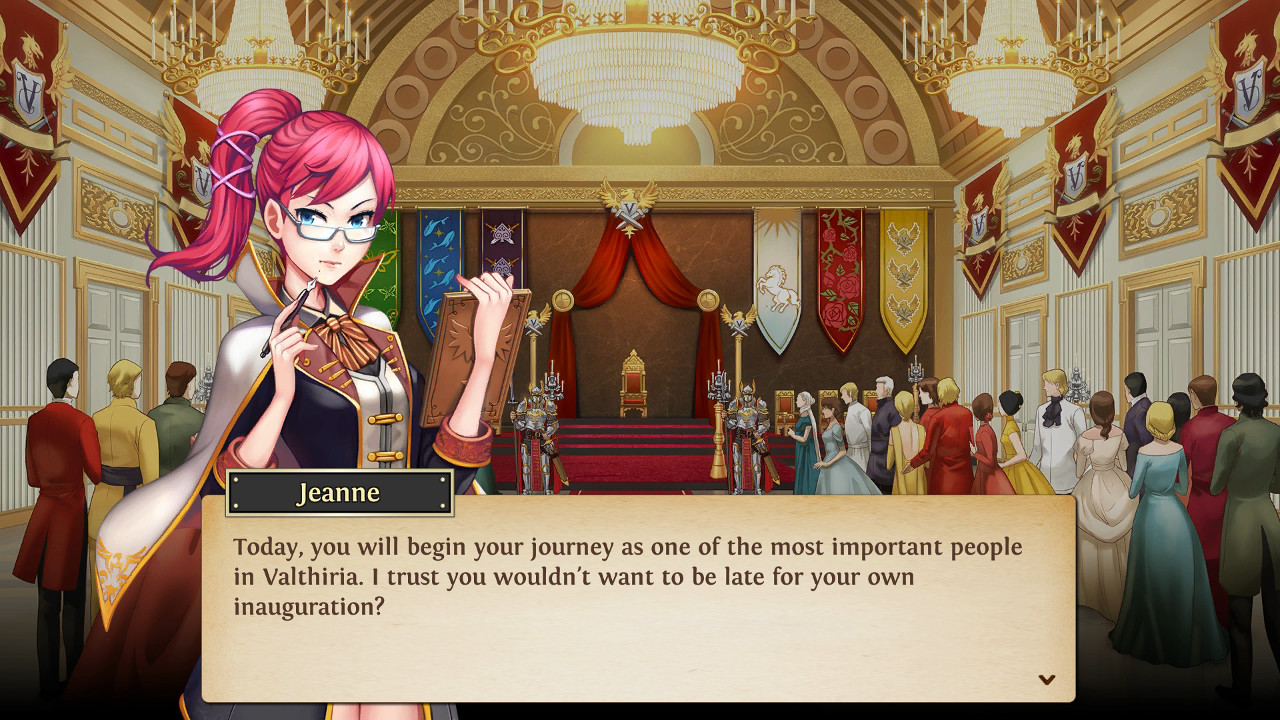 The background lore of the world could be expansive. However, in my playthrough there were occasional allusions to something, say, a guard that worked with the cultists, but either were underdeveloped threads or never mentioned again. Even what I expected to be the primary antagonist in the main plot just suddenly ended as an unexpected subtask of another mission, and that's it.

Enough of the plot, let's look at the actual gameplay. 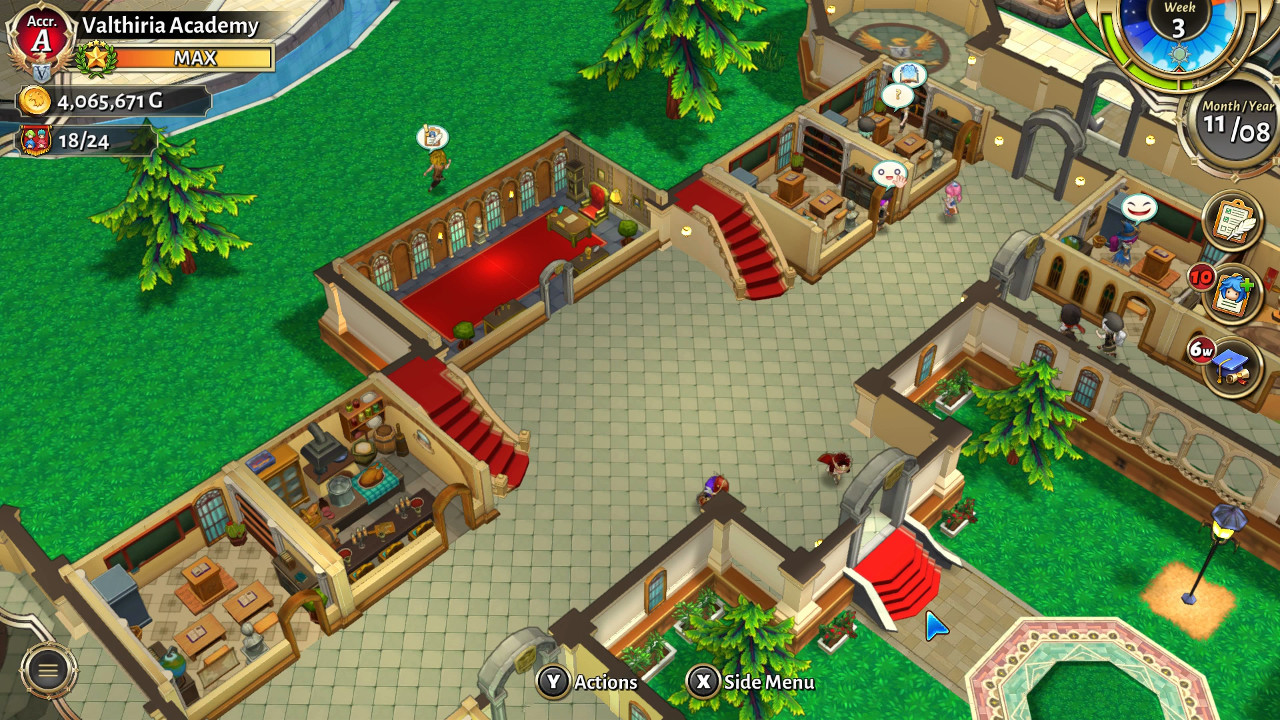 A day at the academy very late in the game (after wrapping up the story, actually).

The academy management has two main parts to it: deciding which students to promote to a different class or graduate, what to have them wield and which facilities to build. There are a limited set of locations to place the facilities (indoor and outdoors), so going wild straight off the bat isn't possible at any stage. Some rooms offer new classes, some offer bonuses like a few percent more experience points in missions.

At least one student has to graduate every six months, and if the graduate meets a changing criterion, the academy gets a bonus in prestige (which will let the player eventually level up the academy and add more facility options) and gold. The higher the education of the student, the higher the reward (money and prestige) the player gets. Thankfully, the biannual graduation is the only timelimit in the game.

There's the armory to create new equipment for the adventurers, but it's not very useful. There's little freedom in customising the academy and very little for the player to do, other than deciding several times an in-game week what to do with a wallet that is found in an empty room. It feels more like the dungeon crawling enables the academy and not the other way round like in Recettear or Rune Factory.

But is the dungeon crawling side any good?

As the player is running a school, the actual adventurers will be the students. They come in barely knowing that the sharp point of the blade is aimed at the enemy, and eventually they'll be promoted twice to new classes (there's total of 6 top-level classes to unlock) and they'll mow down almost anything on the way. 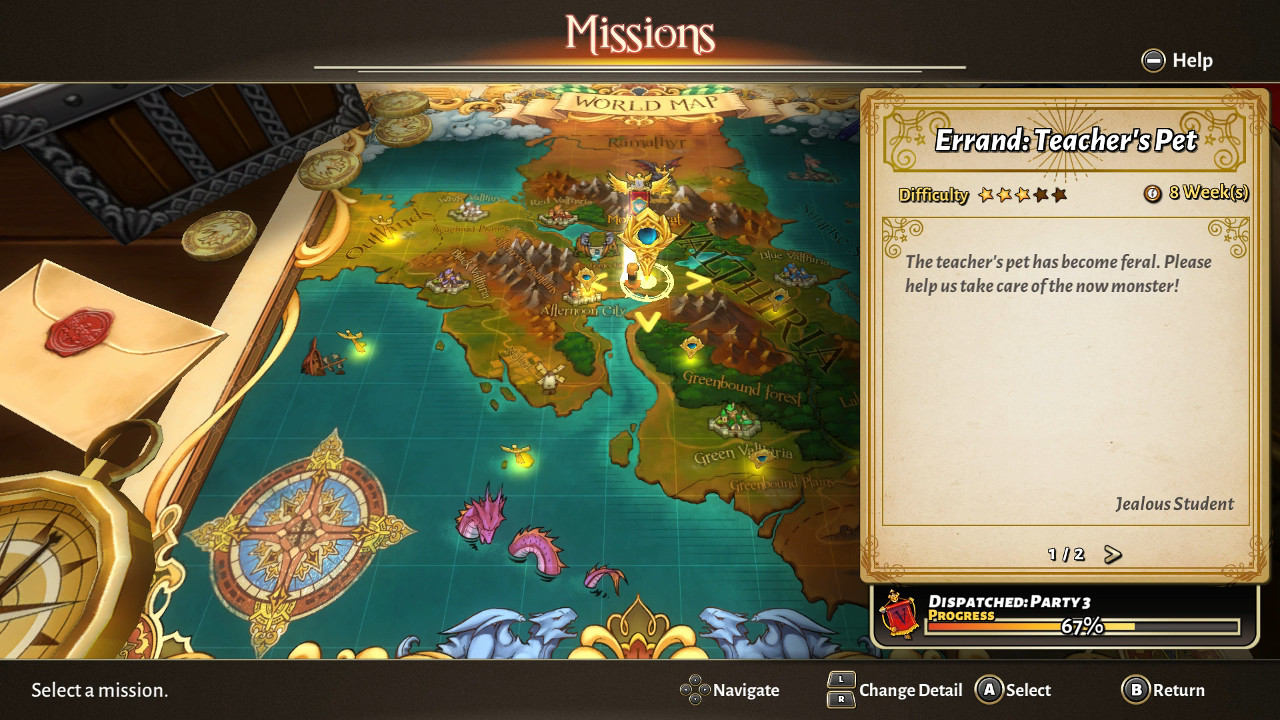 This is a single-player-only game, but the player can swap between the four students on the fly. In practice, the battles typically devolve into a free-for-all against one enemy or keeping the enemy's aggro just outside its range while the player fights. Not deep nor fun. 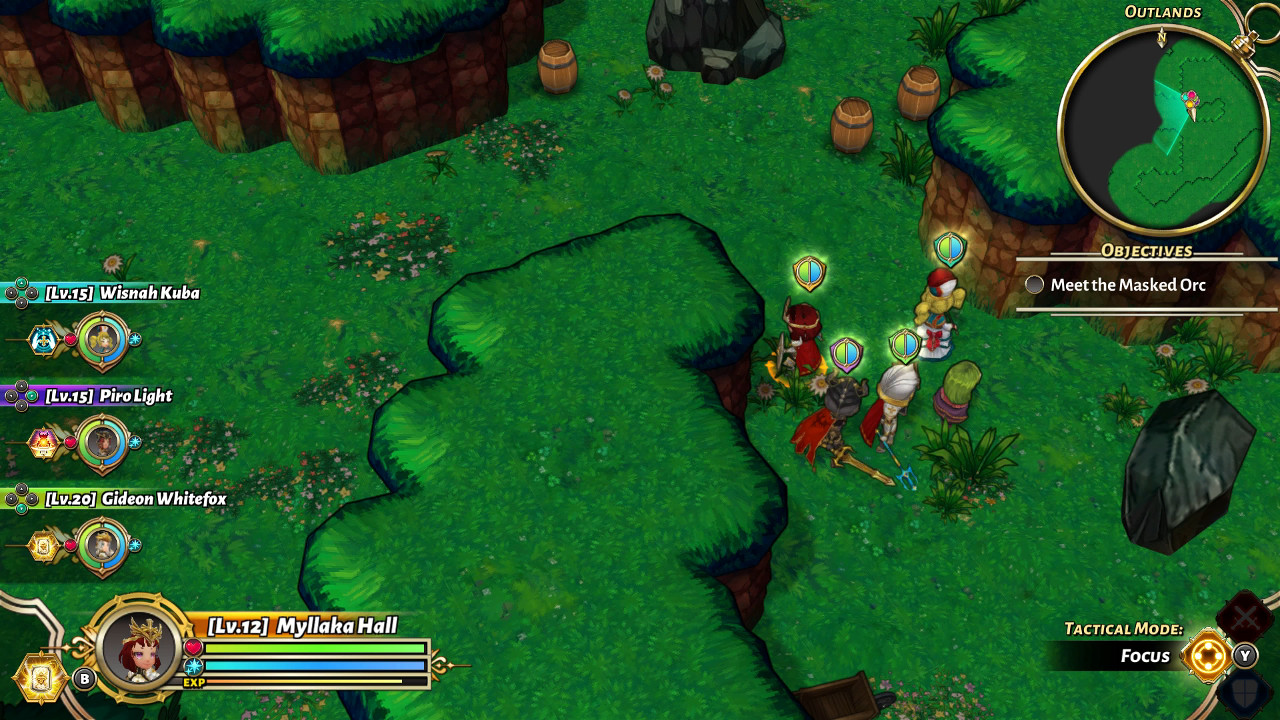 Probably the most common tileset. See the minimap in the top corner to see the level of level design at display. Oh, and every barrel and tall tuft of grass can be broken/cut down to possibly reveal something to collect (materials, gear, crafting recipes or money).

The "dungeon" design is very bare-bones. While they appear to be hand-made, the maps use only a very limited set of tiles and objects, and for the most part the level layouts feel something that could be scraped together very quickly; see the minimap in the above screenshot. Yet somehow, the missions and levels got a massive step up in complexity and quality towards the end of the game with certain mission series.

On the plus side, the students won't die permanently even if the whole group is wiped, and the missions can be retried over and over again (albeit with the time moving on with every attempt). The student turnover rate is still noticeable, though.

So, the dungeon crawling isn't good either. When the actual combat feels like an exercise mostly in button mashing, this part of the game cannot redeem the total package.

Performance-wise, the main trouble was the regular freezing I noticed involved loading new character models. These freezes take about one second and happen both in the character menus and in the one mission that displayed dynamically loaded characters. This happened in both docked and portable modes.

There were also a few random crashes out of the game and some strangeness in localisation ("Want to buy my stuffs?" doesn't sound quite right to me), and I think I spotted some framerate issues mostly in cutscenes.

It's not all bad, though. As the player finds more and better weapons, even the apprentices can use them in their first quest. This helps getting the new students to a quick start, even better if their squad is led by someone from an advanced class. The same with the new buildings the player can build: the students can handle harder missions earlier, which will have them level up faster.

Valthirian Arc is a disappointing game to talk about, because the concept has promise but the execution falls short. I looked at the game's various store pages after finishing the game. Apparently, the player should be able to take side with one Queen over the others. In my first playthrough, I ended up with all the Queens in agreement on the former High Queen's daughter. I attempted another playthrough but gave up around the fifth year after not having seen any changes to the missions available.

The work put into the world lore isn't supported by either the academy management or the dungeon crawling, nor does the whole package feel more than a sum of its parts. I didn't enjoy the gameplay enough to want to play through the game again.

What should have the game done to make it better in my eyes? Here's a few ideas.

One, add a lot more to do in the clicking. Clicking here and there for 250-500 gold coins as a reward isn't interesting (when a lucky barrel in a mission gives about as much). The class mentors were used only in the missions, which is a shame.

Two, more varied missions of varying difficulty that are always available. This is critical especially if the players should have the option to do missions for only some of the Queens.

Three, the dungeon maps need to feel more distinct and the actual combat needs more depth and to be easier to manage. A fair few times I've ended up just attacking empty air by accident.

Four, if getting the most out of the lore requires multiple playthroughs, the gameplay should be good enough to warrant more than one playthrough. It is not now.

Finally, mission titles like "Blimp My Ride", "Have Box - Will Loot", "Wizards of the Roast" and "A Hat in Space" really need to go. Plus taking an arrow to the knee stopped being fun some years ago.