Taito's original Bubble Bobble (1986) was and still is a very highly regarded classic arcade title, probably on many other platforms as well (I've played it on NES, C64 and PC), as it was widely ported to many systems. It was an early example of Taito's cute platformers, with co-op designed into the game from the start.

Yet... I'm now looking at Bubble Bobble 4 Friends after playing it only in solo? 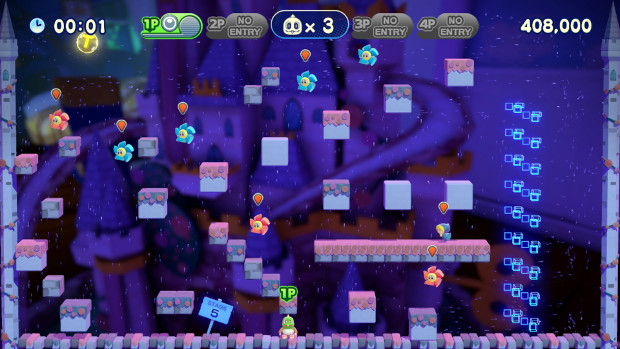 A rather late-game level in the more tradional vein.

The main part of the game is five worlds with ten levels each, the last one being a boss fight. With modern design sensibilities, there are continues and the option to start from each world (not level). There's also powerups the player can take with them to the game, such as lightning bubbles. Clear these 50 levels, and you unlock the hard mode with the same 50 levels, only a bit remixed.

The core premise of the levels is also still the same: blow a bubble, trap the enemy inside one and burst the bubble to defeat the enemy. Dawdle too long, and the enemy will burst out, this time angry.

That sounds familiar, yet there are major differences that may turn off old fans of the series. The players still can collect the letters to form EXTEND, but each letter appears in only one level per world and collecting them all raises the level of an extra skill. No Baron von Blubba or time limit; that's handled through scoring that's also different. A number of the levels aren't "free-flowing" but more constrained, typically with a sense of "reach point A through B". 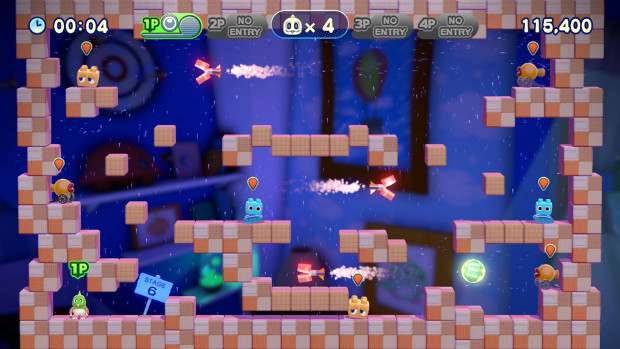 Level 2-6, an example of the new level design. None of the blocks can be jumped through, and the low passage at the bottom can be crawled through only after the enemy at the end is moved aside. The E-bubble will disappear if the player waits too long. To be honest, the first five weren't anywhere near this bad.

This focus on level design is reflected in the enemy behaviour. The first enemies in the original game could jump, walk and fall often wherever in the level. The first enemies here are static blocks that stay put. Another type (the blue ones in the above picture) only moves on the same platform back and forth.

On seemingly spontaneously spawning special stuff -- it's not here. No level-skipping, no powerups that turn the dragons to breathe fire, no shoes for better speed. No surprises like bubbles turning to bonus items.

The list above is only the start, yet the only big changes I'd make to the game at first would be adding more levels. In the normal mode, the "bomb bubbles" with a countdown timer were barely used. Having a few more levels built around them shouldn't have hurt.

One of the big reasons I had preordered NES Classic Mini was that it came with Bubble Bobble's NES version. Somehow, I didn't enjoy my time with it in 2010s as much. The same with the arcade version of Bubble Bobble that comes with Bubble Bobble 4 Friends: I actually see myself playing BB4F rather than the original solo. If only there were more 'easy-to-mid-difficulty' content (without being paid DLC like Bubble Bobble Plus)... 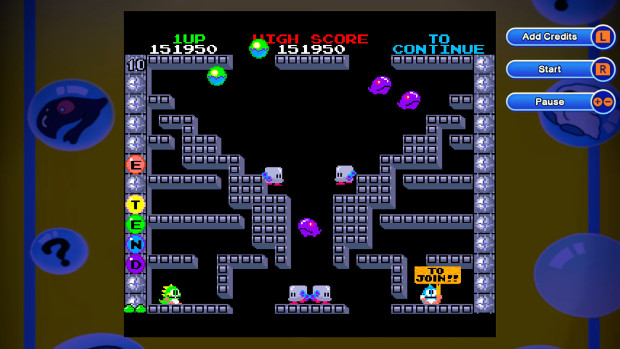 The included arcade original Bubble Bobble (1986). No options to turn off the borders etc. that I could find.

Oh, and the high scores made in the arcade game in BB4F are erased when BB4F is restarted.

In good and bad, Bubble Bobble 4 Friends is not only a facelift or a level pack for the original. It feels overpriced for what it contains (maybe 3-4 hours to clear the 50 levels on normal difficulty, and I've never even come even close to beating BB1 on any system). I wouldn't say it's a great game either, but slightly above the "average". I didn't touch the multiplayer at all, so I don't how much that adds to the experience, but it's local only.