I didn't expect to see these happening: rereleases of feature phone games on modern platforms.

Zanac was an 1986 shmup by Compile, whose later titles included Blazing Lazers, Puyo Puyo and Aleste. This gives Zanac a fair bit of historical value. Its NES/Famicom port was released on the Japanese Wii VC, but apparently not in NA or PAL regions. Here's a longplay on NES (World of Longplays).

This release (G-MODE Archives29 ZANAC), though, doesn't feel as valuable for present-day gamers as that game would've been. Let's make this clear: this is a mobile phone game. It's an old mobile game, which means it doesn't have microtransactions but it also has a very limited resolution. 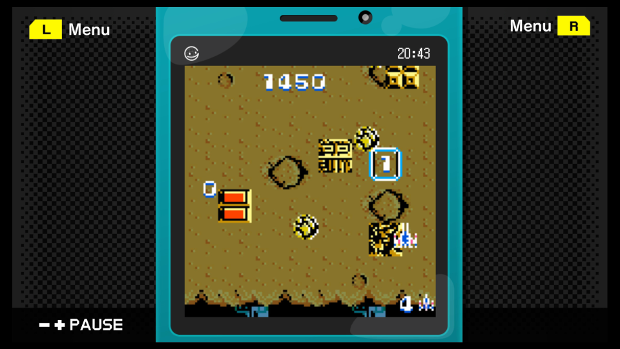 Here's the full screenshot of the game on Switch. The screen scrolls only directly downwards, so the playing field really is this small. This makes me recall Jeremy Parish's Gameboy Works videos, where some of the GB versions of NES games didn't have scaled-down graphics but sprites far too big for the smaller display.

The music is a short piece looping over and over again, and other than short melodies for the ends of levels, one-ups, only the last level has a different piece of music. Truth be told, though, I watched through the longplays of NES and MSX versions, the music was just as repetitious. But at least those versions had sound effects, something this version lacks. Silent bullets firing or hitting enemies, silent enemies and player ships explosions.

The game has two modes (original and arrangement), and a difficulty selector (easy, normal, hard). The original mode on normal was rather easy -- the first time I finished the game I had over a dozen extra lives. (I suppose I got bored enough to stop playing the game rather than finishing the game before deciding I should write a blog on it. A likely explanation for the difficulty was that I wasn't playing this on a phone but a proper controller.) The arrangement has higher-resolution graphics that have been retouched a bit, and the sound looping is a bit better, but there still are no sound effects.

The arrangement mode adds less pixelated graphics and smoother scrolling but still no sound effects. This is definitely more fun than the original mode and less of a strain on the eyes. 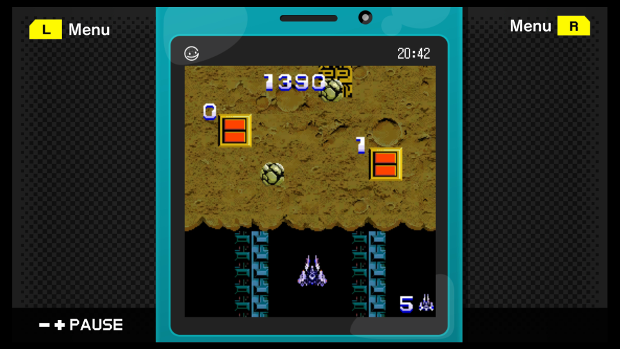 Arrangement mode -- a bit of a facelift, but the underlying game version just isn't very impressive. And still no sound effects.

There are options to toggle the phone framing and filtering on/off, and online leaderboards. For fairness, here's the game without the frame: 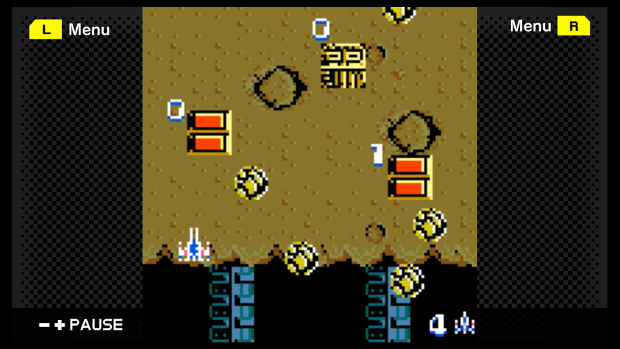 So what is the bottom line?

The original mode has little to offer modern gamers other than reminding how far gaming on phones has come. The arrangement mode is better, but I would still prefer to play the original Zanac even with MSX's 8-pixel scroll chunks. I believe there are vintage phone games that would play well today, but an old shmup squeezed into an even more constrained format before upscaling it to present-day systems is a losing proposition.