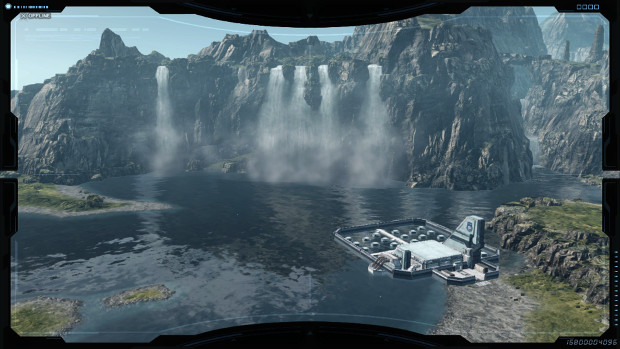 The completed plant at Biahno Lake.

First a caveat: the only RPGs I have played in any significant amount after Morrowind have been all three Xenoblades, and Rune Factory Frontier and 4. In particular I haven't played Squaresoft RPGs newer than Chrono Trigger. This means I cannot compare XCX to other (J)RPGs.

Obviously, this blog has a lot of spoilers.

The plotline isn't long, only two missions. At first, Ian, Rosie and Ajoa can be seen outside the water purification plant inside New Los Angeles, talking how important it is to have access to potable water. Once the Ma-nons arrive to NLA, the water consumption increases so that a new water purification plant will need to be built outside the city, and the location chosen is by Biahno Lake.

The first quest is about building the plant: defeat certain enemies that blocked the material supply and then either defeat more enemies or find replacement materials. To be fair, somehow even this feels so much better than rebuilding Colony 6 in Xenoblade Chronicles 1, maybe because this doesn't wear out its welcome (like the jokes about eating the talking tater), and some of the building materials for the plant are actually at the lakefront while the player is working on this quest, rather than the whole building suddenly appearing from scratch.

But the second part is the main course. Rosie, who's been stuck in NLA, suspects Ian and Ajoa are just partying at the plant, given how the plant is at a beach, and they haven't bothered sending status updates to NLA. She sends the player to check up on them and reprimand them for being so irresponsible.

As it is, the player is attacked at the plant by an enemy type that had been new for me: cantors. Given how these enemies are around level 22 and the other cantors in the game are around level 30-60, I doubt I was alone in this. 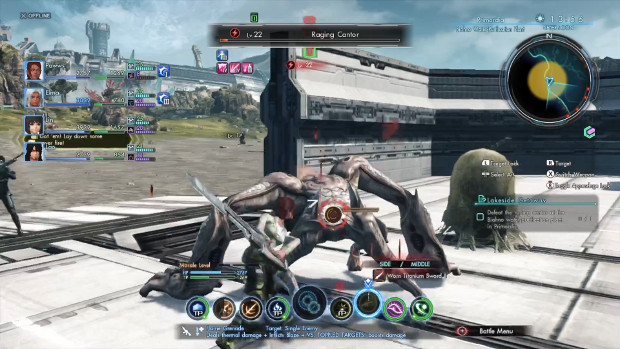 Fight against the first cantor, which is facing away from my character.

The game quickly (and unsubtly) builds the player towards the conclusion that the missing staff became the cantors and Ajoa is the only survivor so far. This mission involves fighting a bunch of cantors on rather narrow paths over water, which is its own horror (more on that in a bit), and "listening" to an audio track (i.e., reading a transcript, because no of voice acting in this mission) about Ian changing into a cantor as the eggs the indigens had planted inside him burst when he attempts to quench his sudden need for water.

This is naturally the point where I'll mention dracunculiasis, which also tempts the infected to submerge the limb with the burning pain to water, at which point the parasite releases many larvae outside the host. These can then infect others via the contaminated water.

Of course, everyone already knows about the parasitic silicon-based lifeform with ascocarps in X-Files S2E9 (Firewalker) and the green-banded broodsacs that turn snails into zombies, so not point in going on about those.

Somewhat similarly, the parasite in XCX, just before it kills the host, makes them thirsty, need to shower or something to make them seek water. This would then trigger the change.

But even with that mission, while Destructoid's review of XCX said it had a "more grimdark theme", I don't think I get what "grimdark" really means. The water purification plant was, I think, closest to a classic horror story the game got. Well, if you ignore the cult leader preaching of the Bringer of Miracles and selling "miracle" water that just cancels the poison she's introduced into the water, and maybe some plotlines that I don't remember right now.

That it was so unique compared to the other missions is one big reason why it still stands apart in my memory. The plant was the only building I recall being built during the game. Other than the BLADE barracks, it was the only other human building the player could go inside of, even though it is just one room between two corridors. And again, the parasites taking over the mimeosomes didn't happen in this game outside this mission.

Sadly, now that I have replayed the mission, I can see a giant problem with the mission: the fight against the cantors at the "inner yard" of the plant. 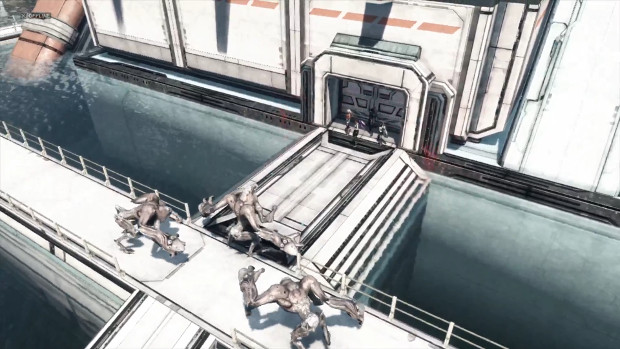 A very stupid fight is about to start. My squad is at the door. (Image taken during a cutscene.)

Let it not be said that the companion AI in Xenoblade X is great. It took me several tries to defeat the cantors despite my character being several levels higher than them. Sure, I haven't paid that much attention to my team and the build nor am I skilled in the combat, but I am claiming a good part of the blame goes to the companion AI who several times failed to go through the door leading to the inner yard before it closed (and they couldn't open it themselves). Or when they dropped from the raised pathways to water where they couldn't attack.

I think there's one more mission taking place at the plant, but I believe it's not very closely tied to the infestation. (EDIT: The Orphe (a xeno race) use the cantor attack as a reason to place automated defense turrets at the site.)

I'm surprised by how much I appreciate the second playthrough of XCX I'm now on. Such as the pizza place mission, which hasn't started yet but Powell's lines have already built the foundation for it.

By limiting the NPCs effectively to only one big town rather than introducing a new town with more throwaway characters in every chapter, I think they've got more room to allow the NPCs evolve in the game as the plot moves on than in Xenoblade 1 or 2. And this time even I can see the foreshadowing.

Just... make quests with NPCs that don't wake up only for the duration of the quest, please?