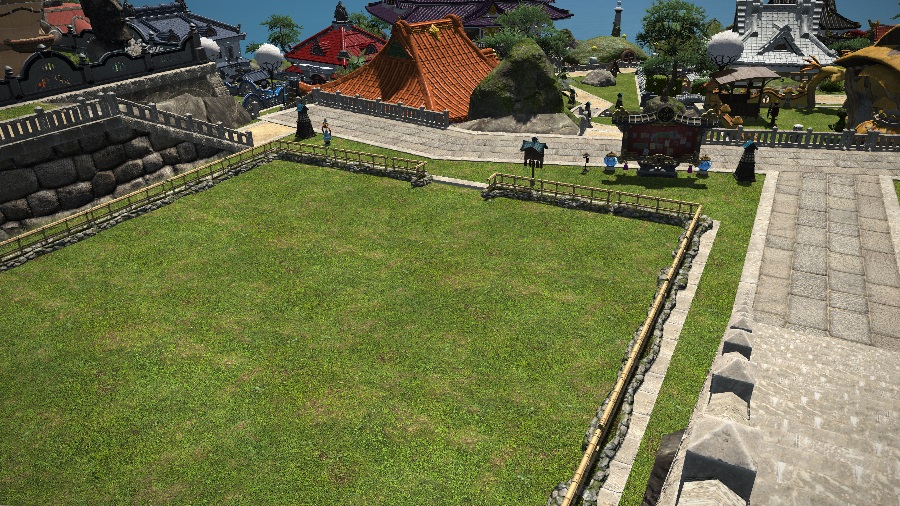 Final Fantasy XIV has been around for quite a while. The Rising event is currently underway celebrating five years of success and reportedly the MMO has hit 14 million users. While FFXIV offers an immersive main story questline, there are tons of things to do in the game. One of the neater ways to spend your time while waiting on a DPS queue to pop is decorating your house. Housing was originally introduced to the game with patch 2.1 and was first only available to free companies as a gathering place that also provided a few buffs and benefits.

The housing floodgate was opened with patch 2.38 where housing plots became available to purchase for personal usage. Since then, housing has been a hot topic in the FFXIV community. Smaller, slower servers often don’t experience too many issues regarding the number of plots while more active servers have been struggling with a lack of space. Naoki Yoshida has made statements regarding the housing shortage. The current solution has been to limit players to one personal plot and one free company plot as long as they meet all the requirements. Housing wards also received a small expansion and apartments were introduced later on in an attempt to manage housing.

Another way that Square Enix has been managing player housing is with auto demolitions. How the demolition system currently works is that a 45 day timer is set on each house. If the owner or a free company member does not physically enter the house within that time frame, the house is reclaimed and the plot becomes available to the server again. You do receive 80% of the gil you spent on the plot as well as your furniture; Square Enix does send a reminder to you 10 days - and again 3 days - before your demolition is scheduled to help you save your home since the timer is reset each time you enter.

What is currently terrifying the FFXIV player base are reports of players’ houses being demolished within days of the owner entering their home. Horror stories have been shared in threads on the official FFXIV forums and FFXIV sub-Reddit expressing concerns of this newly discovered bug. Some of the stories shared described how players have either entered their home to receive a notice that they “avoided demolition” without any notice of them being at risk while others have found their houses to be completely gone once they returned a few days later. Personally, there are two very active members in my free company who have both received notices of avoiding demolition that was scheduled for the next day even though they had been in their house a few days prior.

An email is supposed to be sent to the owner to advise them to log in and prevent demolition. However, there have been reports since May (both on the official forums and sub-Reddit) that owners may not be receiving proper notification. This is a big concern for those who are unable to log in daily or those who aren’t logging in because they are unknowingly at risk. 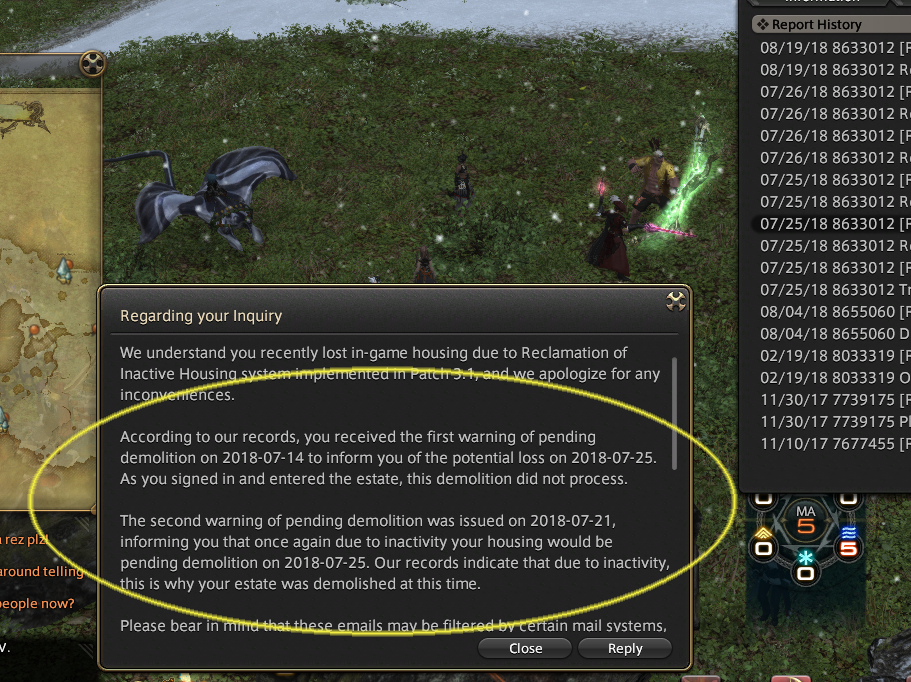 One Reddit poster shared his experience stating that he had received a in-game message that his house was demolished within 11 days of entering his home. He shared a screenshot showing that there was a  report of him entering his player house within the 45 day window. He also apparently never received an email stating that he was originally at risk which matches up to the other reports. Between the lack of notice and the time not resetting, this is causing quite a stir within the FFXIV community. The loss of a player house may not be concern to those who do not utilize their personal houses or are on smaller servers with plots to spare. However, for those on more popular, active servers, this is a huge concern. There is no guarantee that your plot will be available when you return, and if claimed by another player, you’ll have to get lucky to find a new plot since there is currently not a way to get your original plot back even if it was demolished in error. While it is relieving to know that you receive some gil and your furniture back, there is no way to put a price on the time and dedication that some players have poured into decorating their slices of Ezorea.

Square Enix has stated that their investigation has shown that players did receive notices in advance and “ask you to confirm that your email address is up to date in your Square Enix account settings”. They are asking players to please report any issues through normal bug reporting processes and on the forums. At the moment, there is currently no notices to the player base of this possible issue. This also appears to be happening with vareity of data centers and is not limited to a specific server. I strongly suggest ensuring that you are as active as you possibly can with checking in on your free company and personal house. Also ensure that any errors are appropriately reported to Square Enix until there is either confirmation that there is no issue or the issue has been fully fixed.