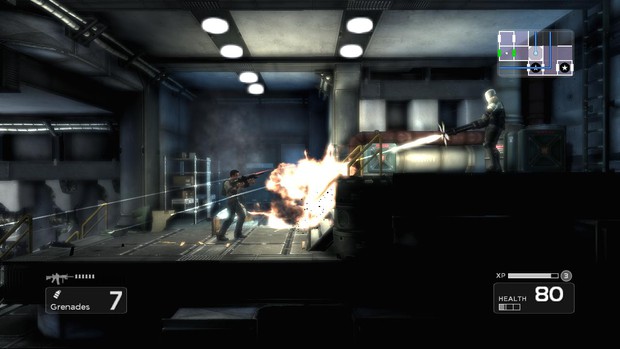 But moving to the more technical part with the visuals, the animations often look stiff, since Nolan North jumps 6 feet in the air when you press A. The running animation looks off and forced, and enemies die in overly flamboyant fashion. But toss in the overly precise aiming reticle, and the fact that you fight metal spiders, I am convinced that the developers were not trying to make any statement regarding murder, and just wanted a fun game, but then they tied it in with a book that�s trying to be serious. This is something that I want to ignore, since you kill a thousand men single handedly and get cured of your facial shrapnel by eating first aid kits, but this is bordering on bad tastes. However, it is just bordering and never really does cross the line due to its mechanics, which, while never denied by the narrative, do make it seem all the sillier.

And with that out of the way, I can conclude that Shadow Complex is a very well polished, well-structured, and overall fun title. While I am still bugged by the narrative immersion breaking aspect, the game is still a lot of fun to blast through, to the point where I do not even notice the idea of it getting boring after I play it at least once every year. It is a pleasure, a fairly glitchy, and sometimes generic feeling pleasure, but it is a wonderfully well crafted title regardless of its relatively small team and short development time.

Have a positive or negative response? Please leave one below, it's the only way I'll improve.
#ShareonCommunityBlogs
Login to vote this up!

Hello there, I'm just some teenage kid who likes games, and likes to talk about them. I plan on mostly doing reviews of newer games and opinion pieces on the current going-ons in the industry.

I have another blog at NigmaBox Where I do random game and anime reviews. No longer posting them here, because I like writing, but not posting. I also am doing a narrative that is somewhat fanfiction with some Dtoid people, somewhat internet critique, but mostly insanity, check it out Here.

I am winging everything that I do, so if I mess up please tell me, although please be kind about it. Since I always assume the worse when I read text from another person and have to force myself to read and respond you the comments of you lovely people, because I am a wimp like that.