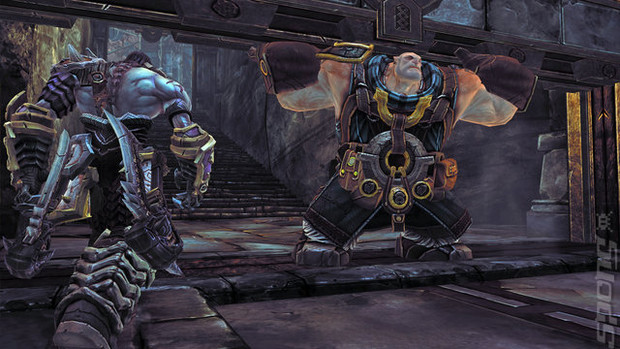 And yes, I could complain about Death, the controller of life as we know it, pushing a ball into a socket, but just having combat would be the definition of one note. But the puzzles are still of good quality, and they don’t get super repetitive throughout the 18 or so dungeons. Yeah, there’s about 18 smaller dungeons in this game, as opposed to the 4 massive temples in Darksiders. Oh, and the super move is still pretty pointless, since it only lasts 15 seconds and takes a bit too long to charge up again. I get empowerment, but Death is not recognizable in his super form, so it creates a feeling similar to the super guide.

As a whole, there is a lot to like about Darksiders II. The characters are interesting and wonderfully voiced. The gameplay is frantic and fun, with enough variety in the 40 hours I spent on it. The world is unique and imaginative. The soundtrack had a very nice sense of scope. And the RPG mechanics added only added to the experience. The story can be jumbled, the collectables can be a pain to get, and there are times when I get peeved at the camera, but those are just minor bits that only happen 5% or less during my time with the game, as opposed to the first game, which had them happen about 25% of the time. Darksiders II will not set your world on fire, but it is a well designed and fun game that manages to stay unique despite borrowing from countless other IPs.


Have a positive or negative response? Please leave one below, it's the only way I'll improve.
#ShareonCommunityBlogs
Login to vote this up!

Hello there, I'm just some teenage kid who likes games, and likes to talk about them. I plan on mostly doing reviews of newer games and opinion pieces on the current going-ons in the industry.

I have another blog at NigmaBox Where I do random game and anime reviews. No longer posting them here, because I like writing, but not posting. I also am doing a narrative that is somewhat fanfiction with some Dtoid people, somewhat internet critique, but mostly insanity, check it out Here.

I am winging everything that I do, so if I mess up please tell me, although please be kind about it. Since I always assume the worse when I read text from another person and have to force myself to read and respond you the comments of you lovely people, because I am a wimp like that.