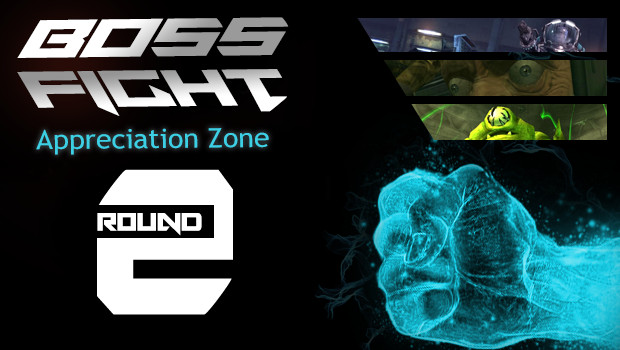 Welcome back to the zone y'all! Hungry for more? I assume that's a FUCK YEAH I'm hearing from everybody out there!

The last "round" was the most succesful blog I've ever written, which says jack shit, but it still manages to feel like a small victory in my dead little eyes. So thanks to all 10-12 of you who care.

I'd like to start out by mentioning a couple of bosses that certain commenters really seemed to enjoy, to spice things up a bit. After all, we all have our preferences, and I don't play all games, or games from all genres, so it's good to have multiple voices. "Mini bosses count? Because everytime one of those Heavy Armored dudes appeared on FEAR it became the most hype shit ever."

I can only assume that these guys are the ones that make you fuck everything and run. Like, I mean, you say "fuck everything", as opposed to having intercourse with everything while in motion. That would look weird.

"I think the obscure boss fight I've enjoyed are Leon in Kingdom Hearts since it's one of the ones where you're supposed to lose but can indeed "win.""

This guy comes across as a smug bastard (EDIT: Leon, that is. Number8Axel is cool!). He doesn't seem to care much that he's in a fight. It might be because his opponent is using a huge key for a weapon. "What, you're gonna unlock me to death? Hue hue!"

"Tower Knight from Demon's Souls remains one of my favorite bosses of all time."

All time is a long time, so this is probably a good one! This thing is like an evil, dark incarnation of one of the Roman soldiers in Asterix, with the giant shield and all. Now we just need a similar version of Obelix.

There were plenty of other mentions in the comments of Round 1, so feel free to check it out!

Peer pressure combined with genuine interest led me to finally pick up Metal Gear Rising, and it is gloriously insane. It's also the kind of game we need more of, as it keeps a tight focus on raw action, without needing elements of 10 other genres mixed in.

I haven't beaten the game yet, and I'm sure that the best bosses are yet to come, but I feel like I have to mention Monsoon, as he was the first boss in the game that I actually feared. I was legit afraid of losing to this guy! He was kicking my ass, and eating up my health packs like they were pretzels*! He threw cars and helicopters at me! He clearly meant business, and I was very close to dying before I finally got the fight turned around.

It's been a while since I've felt like that, and it made victory incredibly satisfying. Monsoon was a turning point for me, and this makes him more than worthy for a mention. Looking forward to the rest of the game!

*Unless they are? Is Raiden pretzel powered? Like me?

It's funny to me that InFamous is known as a series of games based around moral choice, as that is something that I frequently forget. The reason for this is that the action is so good (and good looking), it overshadows everything else. InFamous 2 would still be a great time even if it was just a "normal" action game, and this boss serves to prove it.

God damn! Where do I even begin? This boss comes out of nowhere, at a point where you would never expect a boss fight to happen, and I love that so much! It's brilliant! Just when you think everything is about to calm down, out comes this gigantic abomination simply known as the 'Behemoth'. Your enemies no longer attack you, but help you take down this new threat. Everything changes.

It's an awesome fight! You have all of your powers available to unleash on this thing. You can shoot it! You can bomb it! You can throw cars at! But it will not go down easily, and it is very aggressive with its attacks. The size isn't just for show.

The Behemoth is unforgettable! It's not even the final boss of the game, but I certainly consider it the best.

I don't have that much experience with Metroid, but I do know that the weird alien pterodactyl named Ridley is seemingly allergic to the concept of death. Therefore, he tends to appear in a lot of games, in a lot of different forms.

Now, I don't know exactly what the lore behind Meta Ridley is, but I assume he/she/it can be considered to be one of these forms. The Prime games don't seem to be short of bosses at all, but this one stuck out to me, despite it being a while since I've played Prime 3.

The reason for this is simple: You're faaaaalliiiiing! All the time! Man, that sure is a long, cylinder shaped facility. Must've taken a while to build. But yeah, it's quite exciting to have an entire boss take place during a free fall, especially in a first person game. Good times!

Stranger's Wrath has a habit of letting you explore certain battlefields before the actual battle begins. This is a very good habit, as it allows the player to strategize in advance, as opposed to being lost and confused from the start.

Mr. McGraw is largely defined by the environments you fight him in. It's a large area, which is good, since bosses in this game can harm you from a long distance. The farm has multiple buildings, multiple layers, and a lot of places to hide and/or get an advantage. It's definitely one of my favourite arenas in the game.

What also sets it apart from the rest is the fact that you take out every outlaw minion before the fight begins. This isn't usually the case, as most other bosses fight alongside their thugs. Being a 1-on-1 (or 1-on-2, since the guy's being carried) fight seems like it would be easy compared to the rest, but it isn't, due to McGraw constantly chasing you down.

Look at the gif. See how far away he is? That's pretty much how the battle goes, and it makes the boss feel far more 'western' than the others manage to do. It's you vs. him in a duel to the death, and there is plenty of strategy involved. Super good times!

This is a simple one, but simple is often good. That goes double for the Mega Man games, since you need a place to start your chain of death! Metal Man appears to be one of the toughest around, but he is clearly the most sensible choice for a first boss.

First off, while the guy is violent and angry, he is very much managable without any special weapons. All you need is your basic egg shooter to take him down. It's still a good challenge, since the floor is moving, and you have to dodge several metal blades at a time, so good reflexes are important.

But, importantly, defeating him grants you the best weapon in the game: THE MIGHTY BLADE OF METALLIC SUBSTANCE! Or Metal Blade, whatever. It's the best weapon, and you get it from him, so I'm grateful towards the guy. He's not so bad. At least not when he's dead.

Anything you want to add? I hope so, seeing as you're in the BFAZ to begin with. Keep your silly boss opinions coming, friends. Follow the glorious examples of people like Number8Axel, Bbain and our mysterious guest, along with all the others. The more descriptive you are with your choices, the more likely I am to include your choice in Round 3.

Speaking of Round 3, look forward to demons, dinosaurs, sorcerers and bunnies!