Ok Unrest was a game I'd initially not heard of at least not more than a passing comment and I probably wouldn't have heard of it if not for the#Gamesmatter people who help distribute codes for indie developers to try and help them gain honest feedback. Now I didn't get my code from#GamesMatter I bought unrest in the Steam Sale for a little over £3 with the soundtrack.

I think it's fair to say the following for Unrest: "If you can, don't pay full price". That's not to say the game is inherently bad but it does have some quite big flaws I'll talk about later on.

So for those who don't know Unrest sells itself as an adventure RPG game. In truth I don't think these fully describe the game really a better description would probably be an adventure Visual novel with elements of choose your own adventure. The game has a combat system but it's rarely used and in my playthrough I never ended up using it. The majority of the game is spent talking to various people and making a number of choices along the way.

Unrest is very much a cultural product of an Indian developer, it's plot involves the ideas of the caste system and a section relating to the idea of arranged marriages. Throughout the plot you take on a number of roles each of which has their own motivations and play their own role in the larger story. The story of Unrest is of a mythical race of snake creatures (Naga) whose large empire helps step in to save a human city whose draught has caused problems growing enough crops for its people. The problem start when the diplomat from the Naga empire and the cities own rulers (also its monarchy) are killed off by an advisor in an act of betrayal. The main story revolves around the chaos that ensues as Immigrants from the Naga empire try to make a home in this new city which already struggles to cater for its own people's needs. None of this is helped by a radical temple preaching hatred against the Naga complete with its own militia in the streets. During the story you play a number of characters and the actions you take as each can influence elements of the story later on and even the endings you get. 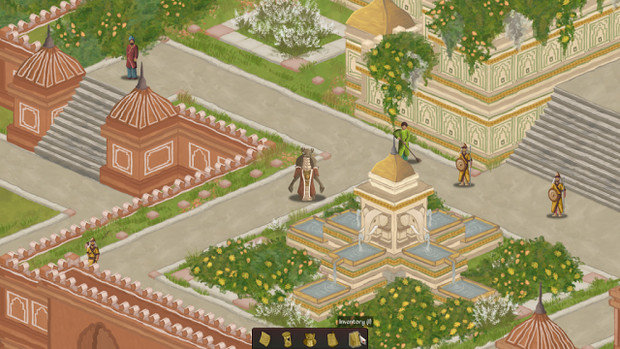 I won't spoil much of the story but in narrative terms this isn't a nice happy little fantasy tale. It's almost comparable in terms of tone to Game Of Thrones. Due to the design decision of multiple characters it allows much more freedom and means that in the narrative it's possible for the game to just brutally cut down other protagonists. Also should you wish you could have your own Game Of Thrones esc moments as you can use underhanded tricks you can play the characters a number of ways and you don't have to play all of them as inherently good. This is a game where your own actions can lead to the character you play being killed and it impacting the story. The ending itself even the best ending isn't a truly happy one but it was one I was fine with though again some people may be rubbed up the wrong way without a true happy ending.

For a quite new indie studio the art style is rather beautiful and rather a change from the now almost expected Pixel Graphics indie studio. The art style isn't some super complex thing such as that of Dust and Elysian Tale it's more simplistic however I feel this works a bit more in the games favour and provides a unique style to the art itself.

Ok I've waxed lyrically about the game enough I said the game had problems and it does. The first and biggest problem (and most talk of on the Steam Forums) is the instability of the game when you launch it for the first time. Personally running on what is not a hugely underpowered laptop (See FAQ) I had the game crash 3 times while initially starting it up. I have no idea about what causes this crash but it seems to be some kind of error in creating some initial save file for the game. During one of the sections in the game it slowed to a crawl in some large open spaces while birds flew across the screen. This is not some high end game, I shouldn't be having the frame rate and game itself drop to a crawl on my machine not in what is at least partly a 2D game with animated sprites.

In terms of options there are a few graphics options such as fullscreen and resolution, there's also the important option to confine the mouse to the window in windowed mode. You can also choose to have the trees animated or not. There however isn't an option for anti aliasing. There is V sync though should you want it. Also it has separate audio sliders for the games music and it's graphics.

Honestly  I'm going to suggest that to me it seems like a problem that the game is selling itself as an RPG. While technically correct it does feel far more like the next level of visual novels and like it would most likely find itself more at home with visual novel fans than with people expecting a 40 hour RPG with stats and levelling.

I'd also say maybe the pricing is a little high as I finished the game in a little over 3 hours and I think maybe it could bare a second play through but it would still seem quite pricey. More so for those in the USA with the $15 price tag.

I do think the game tried an interesting approach by letting people look into the lore etc at their own leisure with information about the characters appearing in the Traits section. The Journal also allowing you to read about the deep lore and story about the locations and people you meet. It lets you look into the world as deeply as you want or ignore much of the additional depth.

Also I have to give the developer serious credit for not only providing modding tools but detailing on their own site how to work it with a very detailed tutorial. Honestly this game allows modding to the level that if someone wanted they may be able to make their own entirely new stories and tales that radically differ from the main game. I will say the modding is at least in part going to require people willing to learn to code (or at least to manipulate existing code) or with experience in it to fully take advantage of it but credit to the developer for laying quite bare how the game works and hopefully someone will be able to use this somehow.

Also I'd say the games system relating to conversation actually really help with the world building and building up the character of some NPC characters in the short time you speak to them. As you talk and pick conversation options you get to see how the person reacts via their words and the changes in the NPCs three bars. The three bars being variations on: accepting, appreciating and Wary or various other versions including comfortable vs hostile  etc. As you speak to NPCs and these bars change  it gives you a very visual display of how they're reacting and thus their personality. For example as a Naga character you might find some characters very resistant and angered to the idea of Naga and Humans sharing and working together. You'll find some characters who'll respect you more for bold claims and actions or others who very much dislike you challenging their world views. I'd say this is a really interesting mechanic and quite different to the more RPG like stats building found oddly enough in many visual novels. 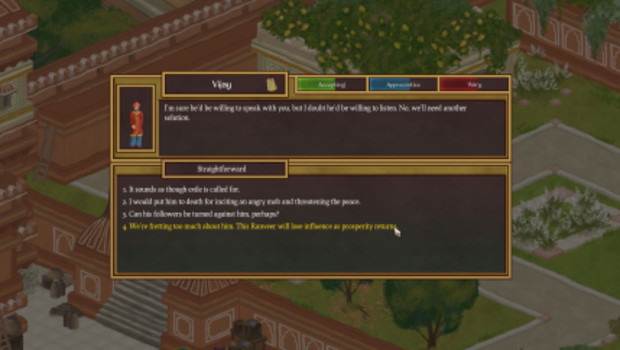 Unrest is a very nice game with some rather unfortunate issues both technical and in terms of decisions around selling it. What it presents is a very interesting and unique world worth experience especially for those who constantly claim gaming should be presenting and showing more experiences and cultures. I unfortunately can't recommend it at present due to the pricing and technical issues however I can suggest people pick it up and try it when it's on sale and the two scores given will represent this.

It's a really nice first title from an indie developer which is mostly bogged down by a few rather nasty technical problems and a few questionable choices. Honestly I'd love to see the developer do a few more games using this engine and maybe work out some of the engine related problems that seem to be present. I think the engine and systems seem like with some work they could be very versatile and adaptable.