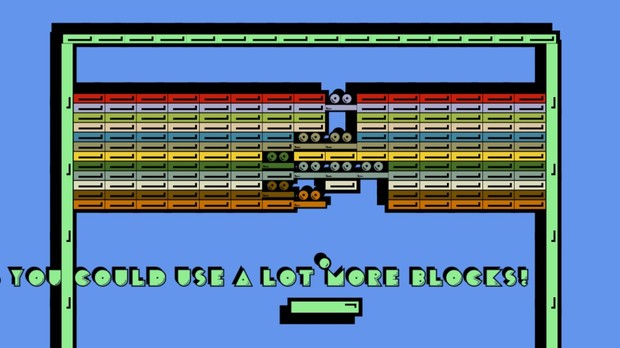 Pacman: Noyd simple increases the speed of the ghosts.

Noughts and crosses / Tic Tac Toe : Noyd is programmed to play what is best described as the perfect game. The perfect game is a scenario where due to going first it�s possible to force the game to be either a win or draw for you and not a loss by playing a specific series of moves. You initially have 5 seconds for your turn, keep forcing it to a draw and Noyd will keep reducing the time until you have 1 second to make a move and the cursor will be as far as possible from where you need it each move.

Space Invaders: Each win results in Noyd starting the next round with his units lower until the final round where they start right at the lower levels �to smash the shields down during their first moves.

Tower defence: You have to awkwardly move to collect resources to pay for turrets while Noyd spams unit after unit down. And even makes the turrets spin later on so they often fire in the wrong direction before changing to hit the target.

Asteroids : Noid continually adds more and more rocks each round until you lose. One death sends you back to the start.

Simon Says : Firstly the sounds change, then Noyd will say the wrong colours, Then only says the right colours doesn�t show them, then goes to a 10+ round sequence.

Shoot the target : Noyd starts after round 1 by having the letters randomly accelerate, then they do it faster (only after you fire so you have to fire way ahead) Then it becomes words then whole sentences and the timer goes down to �less than 8 seconds with double the amount of letters all moving at random speeds and able to go under the UI to hide.

The Final game is minesweeper which I refuse to even play a I dislike the game enough on it�s own let alone knowing it will be rigged.

What I will say is the game is competently made with decent enough sound assets, a variety of games and no unintentional bugs. During Hangman alone there is a range of more than 6 possible words / phrases at each stage.

Verdict : So here�s the time I write a comment that can easily be taken out of context and use to advertise the game �Noyd is a game for those who find Dark Souls 2 a yawn and I want to be the Guy Gaiden to be just a little too easy.�

So Noyd left me a-noyed and as such I�m going to suggest a-void it unless you want to do a rage video on youtube, though that has already been done once.

Noyd is a good concept in theory however in practice it quickly sucks the fun out of it and drains any desire to keep playing other than to finally be able to say you beat the Noyd.
It�s competently made and I can honestly say I wish the developer had put his talents towards an actual game rather than a giant piece of ragequit bait / trolling.

Score 2 out of 6
#CommunityReviews
Login to vote this up!